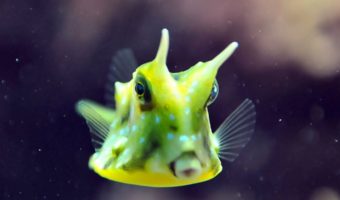 The longhorn cowfish is a variety of Boxfish from the Ostraciidi family, It is recognisable by its long horns that protrude from the front of its head, rather like those of a cow or bull. Longhorn Cowfish are usually around 10 centimetres (4 inches) in length. The cowfish is becoming increasingly popular as a pet although it is not very well suited to a home aquarium. 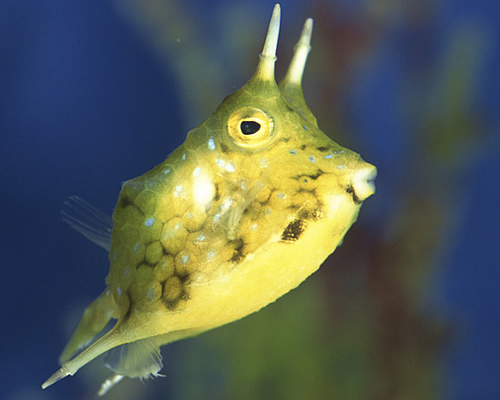 The Longhorn Cowfish is found naturally in the Indo-Pacific region, Red Sea and East Africa eastward through Indonesia to Marquesas including Tuamotus, southern Korea, north to the Ryukyu Islands of southern Japan, south to Australia and Lord Howe Island, and off southern Africa in the Atlantic in tropical and subtropical waters.

Their primary habitat is coral reefs in lagoons, on reef flats and on protected seaward reefs. Juveniles associate with Acropora corals. Depth range is 3.3 – 148 feet (1 – 45 metres, perhaps up to 100 metres).

Longhorn Cowfish are yellow to tan colored with white spots. Adults are often solitary and territorial and live around sand or rubble bottom up to a depth of 50 metres. Longhorn Cowfish are omnivorous fish, feeding upon benthic algae, various microorganisms and foraminiferans that it strains from sediments, sponges, polychaete worms from sand flats, mollusks, small crustaceans and small fishes. The Longhorn Cowfish is able to feed on benthic invertebrates by blowing jets of water into the sandy substrate.

There is no known sexual dimorphism, so both male and female display a yellow to olive base color, which is decorated with white or bluish spots.

Paired courtship occurs just before or after sunset. Eggs and larvae are pelagic (part of the open sea or ocean that is not near the coast or sea floor).

If severely stressed, the Longhorn Cowfish can exude deadly toxin, ostracitoxin, an ichthyotoxic, hemolytic, heat-stable, non-dialyzable, non-protein poison in the mucous secretions of their skin.

The Longhorn Cowfish is apparently unique among known fish poisons; it is toxic to boxfish and resembles red tide and sea cucumber toxins in general properties.

Other unusual features: One distinction from other fish is the lack of a gill cover, which is replaced by a small slit or hole. Their unique method of swimming, called ostraciform swimming, causes them to look as if they are hovering.

Longhorn Cowfish have no pelvic skeleton, so they lack pelvic fins. They are such slow swimmers cowfish are easily caught by hand, making a grunting noise when captured. This is the most well-known cowfish species in the aquarium trade.