You are here: Home / Animals / Lynx 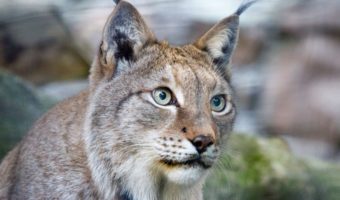 Lynx is the name given to four wild cats from the felidae family. The four species of lynx are: the Canadian Lynx (Lynx canadensis), Eurasian (or Siberian) Lynx (Lynx lynx), Bobcat (Lynx rufus) also known as the wildcat and the Spanish (or Iberian) Lynx (Lynx pardinus). The Caracal, despite sometimes being called Persian Lynx or African Lynx, does not belong to this genus.

The Spanish lynx population continues to decline and it is one of the most endangered cats in the world. The Canadian lynx is becoming very rare in the northern United States due to hunting, habitat destruction and competition with the more aggressive bobcat.

The bobcat is the most successful out of all wildcats as it is highly adaptable both in habitat and prey. The Iberian lynx is one of the worlds rarest mammals and is rated as the most endangered cat species in the world because of its low population, limited number of habitats and its small range.

Lynx populations rise and fall in synchronization with the population cycles of snowshoe hares. When hares are abundant, more lynx survive to reproduce and their numbers increase. When hare populations fall, which occurs every 10 years, many lynx die of starvation. 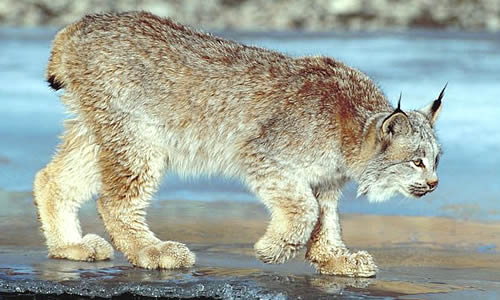 Lynx are medium sized cats whose coats of fur vary in color according to their climate range. Lynx in the southern regions of their range tend to be shorter haired, darker in color and have smaller paws, whereas in the Northern regions their coats are thicker and lighter in color (for camouflage), and their paws are larger and much more padded to deal with the cold and snow.

All species of lynx have white fur on their chests, bellies and on the insides of their legs. Lynx have short tails, long whiskers and characteristic tufts of black hair on the tip of the ears. Lynx have long front and hind legs that support their thick set body which measures 65 – 130 centimetres (26 – 51 inches) in length and weighs about 11 – 37 pounds (5 – 17 kilograms). Lynx have a tail length of 2 – 6 inches (5 – 16 centimetres).

Canadian lynx are smaller than Eurasian lynx and are more grey in coloration. Like all cats, the lynx has exceptional night vision due to a layer of mirror-like cells in their eyes called the tapetum lucidum. Light that is unabsorbed by the retinal receptor layer hits the tapetum lucidum and is reflected right back at the retinal receptor layer for another chance at absorption. This is why cat eyes shine in the dark. Their sensitive whiskers, quick reflexes and acute hearing also help the lynx hunt at night.

Lynx cats prefer cold, wilderness areas and high altitude forests with dense coverings of grass, reeds and shrubs. Lynx cats have very large ranges, by far the largest range of any other felids. Lynx make dens in rock crevices or under ledges. In harsh, severe weather and when breeding, lynx take shelter in caves or in hollow trees or logs. Although the Iberian lynx appears not to fear man, it will not live in areas where permanent settlements of humans are established.

Lynx cats are carnivores, diurnal hunters and feed up on a wide range of animals including reindeer, roe deer, small red deer, caribou, chamois, birds, small mammals, such as snowshoe hares, fish, sheep and goats. Although the lynx hunts mainly on the ground, it can climb trees and it can also swim, catching fish to assist its diet. Although not a timid hunter the lynx will rarely contest its prey if confronted by other carnivores and will leave the prey uneaten. The Eurasian lynx lives in the forest and eats ungulates such as deer, while the Iberian lynx prefers scrub vegetation and eats mainly rabbits. Lynx hunt by stalking or ambushing their prey.

Lynx cats are usually solitary creatures, however, small groups of lynx sometimes hunt and travel together. Male territories are larger and can overlap several female territories. Lynx cats are agile climbers and spend most of their time on the branches of trees, waiting for prey such as weaker mammals and terrestrial birds to pass beneath them. Lynx are very vocal animals and they can make an amazing variety of hissing, chattering and yowling sounds.

The lynx breeding season occurs in late winter. Female lynx give birth to 2 – 4 kittens after a gestation period of 56 – 70 days, once a year. The kittens weigh 200 – 300 grams at birth. The female will nurse the kittens for 5 months, although some kittens can eat meat at one month old. 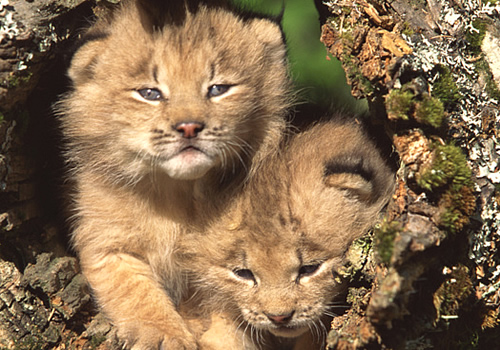 Male lynx do not take part in the parental care of the kittens. The kittens and their mother will stay together until the following winters mating season and siblings may remain together for a while after they have separated from their mother. The life span of the lynx is as long as 12 – 20 years.

The hunting of lynx cats is illegal in many countries. The Spanish (Iberian) Lynx is critically endangered, facing extinction and the killing of any individuals has been outlawed since the 1970s in Spain and Portugal. In 2000, the U.S. Fish and Wildlife Service designated the Canadian Lynx a Threatened species. Lynx are hunted for their fur and by farmers to protect their farm animals, as they are considered to be a predator of domestic animals.

A 30 pound lynx has bigger feet than a 200 pound mountain lion. Their big feet act like snowshoes, allowing them to hunt effectively even in deep snow.