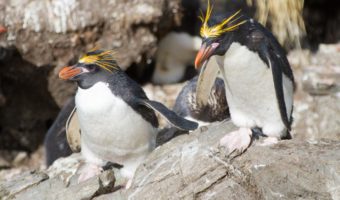 The Macaroni Penguin is a species of penguin closely related to the Rockhopper Penguin. It is one of eight species of crested penguin that is found on the Antarctic Peninsula, on a number of Antarctic and subantarctic islands in the Atlantic and Indian oceans, and on the islands near the coasts of Chile and Argentina. Macaroni penguins are most notable for their long yellow-orange feathers on their crest that contrast with the black feathers on their head. 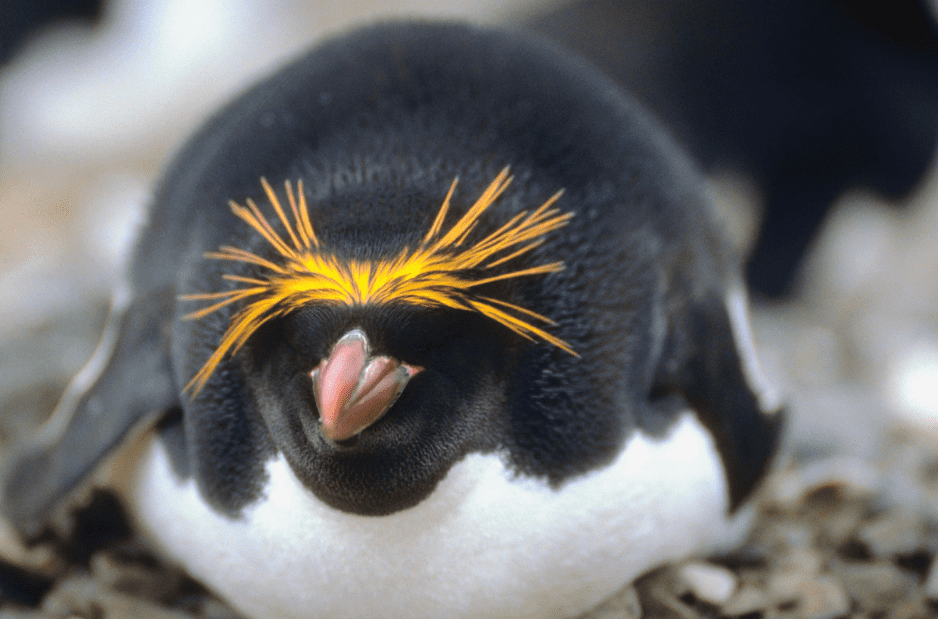 History Of The Macaroni Penguin

The macaroni penguin was first described from the Falkland Islands in 1837 by German naturalist Johann Friedrich von Brandt. One of eight species of crested penguin, the common name macaroni penguin comes from macaroni fashion, the name for the exaggerated style of dress that appeared in Europe during the late 18th century.

This penguin belongs to the genus Eudyptes, with the name derived from Ancient Greek words eu “good”, and dyptes “diver”. The specific scientific name chrysolophus is derived from the Greek words chryse “golden”, and lophos “crest”.

These penguins have a black head, chin, throat and upper part, which contrasts the white under parts. Their black feathers can show a bluish sheen when new and brownish when old. Their flippers are blue-black on the upper surface with a white trailing edge, and mainly white underneath with a black tip and leading edge.

The most prominent feature of the macaroni penguin is the crown of long yellow-orange feathers that originates about 1 cm (0.4 inch) from the top of the bill, extending backwards above each eye to the back of the head.

Macaroni penguins have a large and bulbous bill that is orange-brown in color. Males usually have a larger bill than females, measuring 6.1 cm (2.4 in) compared to 5.4 cm (2.1 in) in females. Both sexes have red eyes and a patch of pinkish bare skin from the base of the bill to the eye. They also have pink legs and feet. 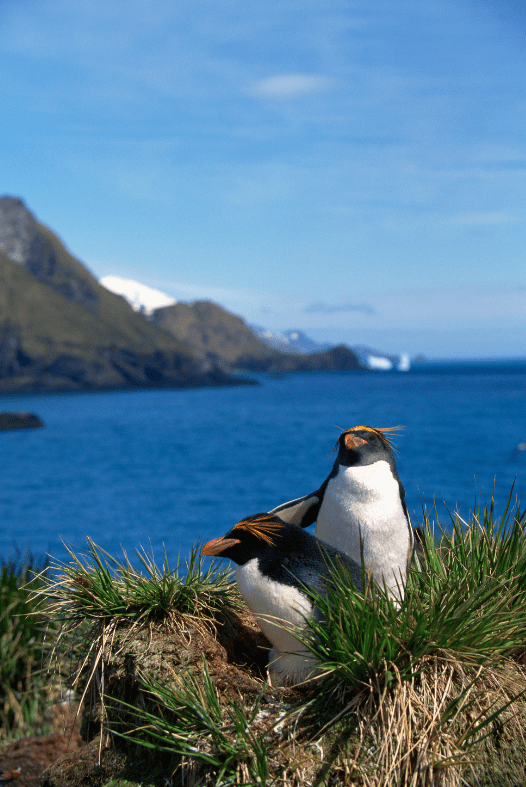 The macaroni and royal penguins have very similar appearances, but the royal penguin has a white face instead of the usually black face of the macaroni. The erect-crested penguin is also similar; it is almost as large, and also has a black face and long, robust orange bill, but has paired crests that do not meet on the forehead.

Young and immature macaroni penguins are distinguished by their smaller size, smaller, duller-brown bill, dark grey chin and throat, and absent or underdeveloped head plumes, which are often just a scattering of yellow feathers. Their impressive crest is not usually developed until they are three to four years of age, which is a year or two before they reach breeding age.

These birds moult once a year and replace all of their old feathers. This usually take three to four weeks. They spend two weeks before this period accumulating fat, because they cannot enter water to forage for food without feathers and therefore do not eat while moulting.

The life span of the macaroni penguin ranges from 8 to 15 years.

The macaroni penguin’s diet is mostly comprised of krill, but they also eat other crustaceans, cephalopods and small fish. They catch most of their prey at depths of 15–70 metres (50–230 feet), but will dive as deep as 115 metres (375 feet) if needed! They usually dive deeper and for longer outside of the breeding season. These penguins can venture as far as 303 kilometres (188 miles) from their colonies in search of food.

Dives are usually two minutes in duration and rarely exceed this. The penguin’s dives are V-shaped, and no time is spent at the sea bottom. They will usually catch between 4 to 16 krill or 40 to 50 amphipods per dive.

Like several other penguin species, the macaroni penguin sometimes deliberately swallows small (10 to 30 mm in diameter) stones. This is thought to aid in deep-sea diving, helping to weigh them down to get to deeper levels. These stones may also help to grind food, especially the exoskeletons of crustaceans, which are a significant part of their diet.

Macaroni penguins forage for food on an almost daily basis, particularly when they have chicks to feed. During breeding, the female does most of the foraging until the end of the guard stage. Foraging usually happens in the daylight hours and is restricted in the winter due to the shorter days. Some overnight diving happens, but these dives are shallower than usual (3 to 6 m (9.8 to 19.7 ft)) and normally only happens outside of the breeding season or if the chicks are older.

Apart from coming ashore for breeding and moulting, the macaroni penguin spends its life at sea. They are very social animals when it comes to both foraging and nesting, and their breeding colonies are some of the largest and most densely populated. These birds are very vocal, which is evident when the male macaroni penguins are at sea during the breeding period and the colonies quieten dramatically.

Macaroni penguins will fight with other individuals from adjacent nests, often engaging in ‘bill-jousting’. This is when the birds lock their bills and wrestle, as well as batting their flippers and pecking at each other’s napes. These animals are also prone to displays to confront or drive off unwelcome individuals.

The macaroni penguin also has a submissive display, which includes the ‘slender walk’. This is where the penguins move through the colony with their feathers flattened, their flippers moved to the front of their body, and their head and neck hunched.

The adult macaroni penguin is a social nester, and they congregate in very large breeding colonies. They begin to breed from late October, and typically lay their eggs in early November. Their nests are made of small stones and pebbles in muddy or gravelly areas, although some are made of grasses, too. These nests are densely packed, and will usually be located around 66 cm apart in the middle of a colony to 86 cm at the edges.

A female macaroni penguin will lay two eggs each breeding season. The first egg to be laid is very unlikely to survive and usually measures only 61 to 64% of the size of the second egg. The first egg is between 90 and 94g (3.2–3.3 oz), whereas the second is between 145 and 150g (5.1–5.5 oz). Together, they weigh 4.8% of the mother’s body weight and the composition is 20% yolk, 66% albumen, and 14% shell. The shell is very thick, preventing breakage, and the yolk is is large. Some of the yolk remains at hatching and is consumed by the chick in its first few days.

Many penguin pairs discard the smaller egg by pushing it out of the nest. On rare occasions, the smaller egg is incubated until it hatches, and the breeding pair raises both chicks.

Both parents incubate the egg in two or three long shifts over the course of the full 33 to 39 day period. For the first three to four weeks, the egg is incubated by both parents. For the next, the mother incubates the egg while the father goes to sea, and, for the last, its father incubates the egg. Once the third shift of incubation begins, the mother will not return to the nest until the egg has been hatched.

Both sexes of macaroni penguins fast for a considerable amount of time during breeding and they lose 36 to 40% of their body weight during this period.

Once the chick has been hatched, the father does most of the caring while the mother forages for food and brings it back to the nest. The chicks have only a few feathers in their first month of life, so their father helps to keep them warm. Macaroni penguin chicks have gray feathers on their back and a white underside.

After the first three to four weeks, both parents may go out to sea to forage for food. During this time, the baby penguins form nursery groups with other chicks called ‘crèches’ where they huddle together for warmth and protection. They are ready to go out on their own when their adult feathers have grown in, which is usually around 60 to 70 days old. The penguins usually leave their breeding colony in around April or May to return to the ocean.

Like many species of penguins, macaroni penguins are mostly monogamous and are likely to mate for life. Female macaroni penguins become sexually mature at age five, while most males wait until the age of six to breed. Females breed at a younger age because the male population is larger and this allows female penguins to select more experienced male partners as soon as the females are physically able to breed. Once females arrive at a colony, males use sexual displays to attract partners, which includes bowing, braying and trumpeting. 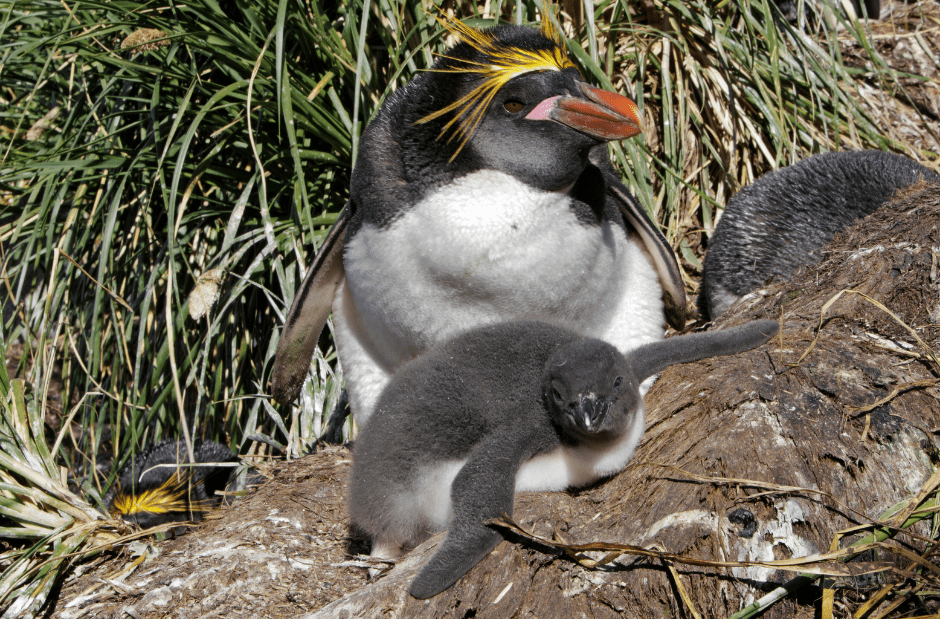 Macaroni penguins breed in at least 216 colonies at 50 sites. They are found in much of Antarctica and the Antarctic Peninsula, including the northern South Shetland Islands, Bouvet Island, the Prince Edward and Marion islands, the Crozet Islands, the Kerguelen Islands, and the Heard and McDonald Islands. They are also found in South America; in southern Chile, the Falkland Islands, South Georgia and the South Sandwich Islands, and South Orkney Islands.

While macaroni penguins are foraging, they’ll range as far as islands off Australia, New Zealand, southern Brazil, Tristan da Cunha, and South Africa. They spend most of their life at sea, and only come ashore to breed and moult.

A 1993 review estimated that the macaroni was the most abundant species of penguin, with a minimum of 11,841,600 pairs worldwide. It has been recorded that there are at least 216 breeding colonies at 50 sites. Despite this, there has been a significant decline of these penguins in several locations, such as South Georgia and Isla Recalada in southern Chile, especially over the last 30 years, and this has resulted as the macaroni penguin being listed as globally Vulnerable by the IUCN Red List of Threatened Species.

The cause of the decline in numbers is unclear, but it is thought that climate change, commercial fishing of krill and other penguin prey, and an abundance in prey species are to contribute. There are conservation efforts in place, with long term monitoring programs underway at a number of breeding colonies and reserve protection in areas of penguin breeding.

The penguins are most at risk when in the water, with low risk of predation when at breeding sites. Predators usually only take eggs or chicks if they have been abandoned or left unattended. These predators are usually Skua species, the snowy sheathbill, and kelp gull.