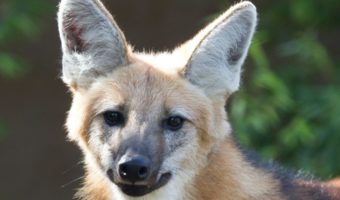 The Maned Wolf (Chrysocyon brachyurus) is the largest canid in South America.

The Maned Wolf resembles a large dog with reddish fur.

The Maned Wolf is an endangered species and its range once included Uruguay and northern Argentina, although IUCN lists it as ‘lower risk’. The Maned Wolf is the only species in the genus Chrysocyon.

The Maned Wolf appears as a cross among different species: the head and coloring of a wolf, the large ears of an African hunting dog and the body of a hyena. Some think the wolf looks like a mix between a wolf and a fox. The Maned Wolf has often been described as a ‘Red Fox on stilts’. 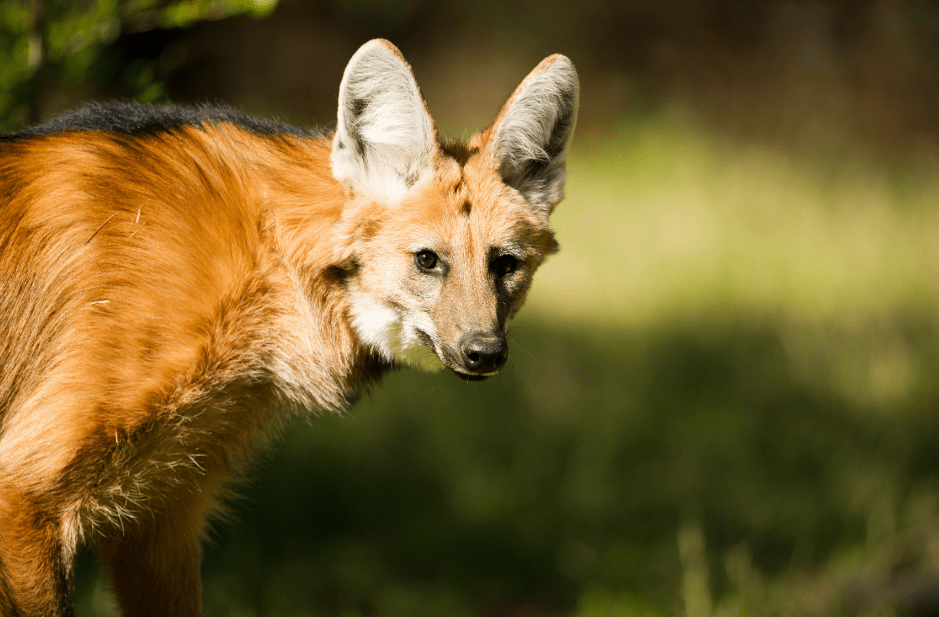 The Maned Wolfs fur is reddish brown on the sides, with long black legs and a distinctive black mane. The coat is further marked with whitish tufts at the tip of the tail and a white ‘bib’ beneath the throat. Their mane is able to stand upright and is typically used to enlarge the wolfs profile when threatened or when displaying aggression.

Maned Wolves do not form packs like other wolves. Maned Wolves live in monogamous pairs (having one partner for life) and only interact during the breeding season. April marks the beginning of the breeding season. In August and early September mothers give birth to 2 – 5 maned wolf pups. In captivity, males help raise pups by regurgitating food. Captive Maned wolves live between 12 – 15 years. Little information is known about family habits of wild Maned wolves. 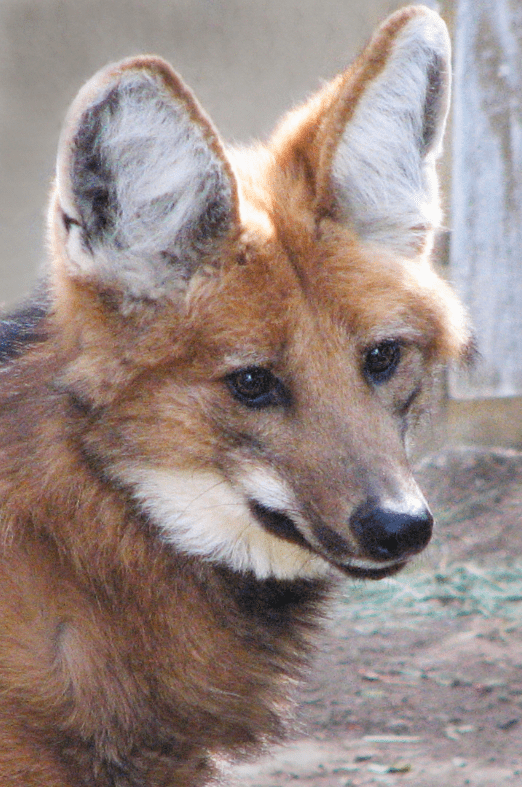 Whereas other large canids hunt cooperatively to capture ungulate prey, Maned wolves specialize in small prey. At night Maned Wolves search for rodents, hares and birds. Fruits are a large fraction of their diet. Most interestingly of all, a large portion of the diet, over 50%, according to some studies, is made of fruits and plant matter, especially Wolf Apples, the tomato-like fruit of Solanum lycocarpum. Captive maned wolves were traditionally fed meat-heavy diets and developed kidney stones. Zoo diets now feature fruits and vegetables, as well as meat and dog chow.

Maned wolves are nocturnal (most active in the night) preferring to rest under forest cover during the day and hunt until sunrise. Contrary to popular opinion, Maned wolves are very shy and only attack humans when they feel threatened or afraid. (For more information see Wolf Behaviour).

Habitat destruction through agricultural development threatens Maned wolves. The effects of agriculture, overgrazing by cattle, annual burning of pasture and soil erosion leave less food and territory for Maned wolves. Maned wolves cannot meet and mate with other Maned wolves when they are isolated from each other. Sometimes Maned wolves are killed by ranchers when they try to eat domestic chickens, a convenient food. It is estimated that there are between 4500 – 2200 Maned wolves. The Maned wolf is one of the many species maintained at the National Zoos Conservation and Research Centre that participate in cooperative breeding programs under the auspices of the American Association of Zoos and Aquariums (AZA).