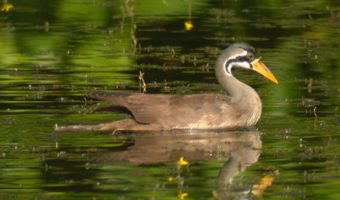 The Masked Finfoot (Heliopais personata) is a specially adapted aquatic bird found across Southern Asia including Malaysia, Indochina and Indonesia.

The Masked Finfoot belongs to the Heliornithidae family, a small family of tropical birds with webbed lobes on their feet and includes the African Finfoot and the Sungrebe.

The Masked Finfoot is a shy and reserved bird, but quite tame particularly when incubating eggs which makes it vulnerable to human predatation.

Use the information below to find out more about the Masked Finfoot’s characteristics, habitat, diet, behaviour and reproduction.

As its name suggests, both male and female finfoots have a black facial mask and eyebrow which contrasts with a white eyering and neck marking. The lower half of the neck is grey and it’s breast is pale grey. The back, tail and wings are a rich brown color. Males have a black chin while females have a white chin.

The Masked Finfoot is adapted for a variety of aquatic habitats such as brackish wetlands, mangrove swamps and lowland riverine forests, as well as forests and savanna woodlands. It has been recorded in both coastal and inland wetlands, such as tidal creeks and flooded forests.

The Masked Finfoot is an opportunisic feeder. Its diet consists of aquatic invertebrates such as Mayfly and Mayfly larvae, Dragonflies and crustaceans. They will also eat snails, fish and amphibians.

Finfoots will also take prey off the waters surface and being skilled out of the water as well as in, they will also forage on river banks.

Masked Finfoots are not gregarious birds and are only usually observed in pairs or singular. Although it is adapted for aquatic surroundings, it is quite competent on land.

The masked finfoot can run quite fast on land and even clamber into trees and is quite agile at manouevring through the branches. The reason why these birds are quite flexible on land is due to their feet not being fully webbed. Instead, their feet are lobed like in Grebes and Coots. This enables the finfoot to be competent in water by using its lobed feet to propel itself through the water and yet unrestricted on land.

Masked Finfoots are vocal birds and produce a rather high-pitched bubbling sound during courtship, sometimes followed by clucks.

The breeding habits of the Masked Finfoot are fairly unknown as it is such a secretive bird. They are so elusive that even experienced ornithologists do not fully understand their behaviour or if they spend more time in the water than on land.

It is thought that breeding coincides with the rainy seasons. Nests are a pad-shaped structure of small sticks that is constrcuted above the water. Females lay 5 – 7 eggs into the nests. Finfoot chicks leave the nest shortly after hatching. Life span is unknown.

The Masked Finfoot is classed as ‘Endangered‘ and are still declining in numbers. This elusive species has a very small, and very rapidly declining population. Fewer than 2,500 birds are thought to populate the world. Threats include habitat loss and human disturbances. The Masked Finfoot is protected in Malaysia.