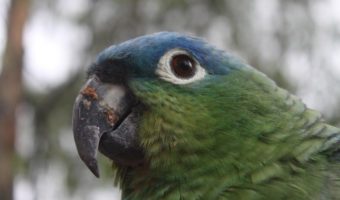 The Mealy Parrot (Amazona farinosa) is one of the largest Amazon Rainforest parrot species.

Mealy Parrots are 38 – 40 centimetres tall from the top of their head to the tip of their tail and typically weigh between 540 to 700 grams. Some Mealy parrots, however, are much larger than this.

Though less colorful than related parrot species, Mealy Parrots have a patch of blue, purple or violet on the top of their heads. Along with the purple or blue crown, Mealy Parrot sometimes have patches of yellow on the head and usually have a green or mostly green body, with tail feathers being light green or lime at the tip.

Some Mealy Parrots have a light blue/teal sheen to their green coat, and an undercoat of yellow, blue, purple, red, and/or teal.

The Mealy Parrots beaks are usually yellowish. Their eyes are a reddish-orange color and underneath the eyes are usually white unfeathered rings.

Mealy Parrots are social birds and can be found in pairs or in large flocks. They are even known to interact with other parrot species, such as macaws. Mealy Parrots are usually quiet but can be loud at dusk and dawn.

Courtship usually begins in early spring. The hen will usually lay three eggs, which she incubates for 28 days. The male will eat for both himself and the female during the incubation period. He will then regurgitate the food for the female and their young.

Trafficking of the Mealy Parrot (as for exotic pets) is illegal in many nations, but the species are still smuggled into the United States from Mexico. In some areas Mealy Parrots are hunted as food.

The Mealy Parrot sometimes feeds on human crops (especially corn) and may be considered a crop pest.

The Mealy Amazon is commonly bred in captivity and is not classed as an endangered species.