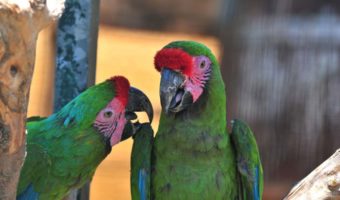 The Military Macaw (Ara militaris), is a medium sized member of the macaw family. It is found in the rainforests of Mexico and South America.

The Military Macaw is mostly green in color with the head a slightly paler shade. It bears a red frontal patch, with a white bare facial area barred with narrow black lines.

The flight feathers are blue and the red tail bordered with blue. The large strong beak is grey-black and the iris is yellow.

Military Macaws can often be heard long before they are seen. They are a very noisy bird making a variety of loud cracking and shrieking sounds, including a loud ‘kraa-aak’.

The Military Macaws diet consists of seeds, fruits, nuts, berries and other vegetation found on treetops in the rainforests. Their beaks are well adapted for eating various seeds and nuts as they have the ability to break open the hardest of shells with relative ease.

Military Macaws will leave their roosts in flocks around dawn and head to their feeding areas. They will also visit heaps of clay known as ‘macaw licks’. These clay licks are found along riverbanks or sometimes inside the Amazon rainforest. Macaws will flock to feed on these clay deposits, which appear to detoxify the poisons found in the seeds and vegetation of the rest of their diet.

The three subspecies of Military Macaw breed at different times. However this probably has more to do with the geographical region they are residing in than anything else. Breeding in the militaris species occurs from January to March. The mexicana species breeds from April to July and the boliviana species breeds in November and December.

Military Macaws are monogamous and remain with their mates for life. As they fly around in large flocks, the mates/pairs will fly together. They will also be found flying in pairs in their feeding and roosting/nesting areas.

Females will lay one to two eggs which only she will incubate for a period of approximately 26 days. Military Macaws will reach sexual maturity in two to four years.

Military Macaws live in large flocks and can live around 50 – 60 years in the wild.

The Military Macaw inhabits arid woodlands and subtropical forests. They will nest in the tops of trees and more often in cliff-faces over 600 feet. (200 metres) above the ground.

Military Macaws are now listed as Vulnerable on the 2006 IUCN Red List Category. They are also listed as CITES (Convention on International Trade in Endangered Species of Wild Fauna and Flora) Appendix I, which protects the birds from being captured for trade.