You are here: Home / Animals / Millipedes 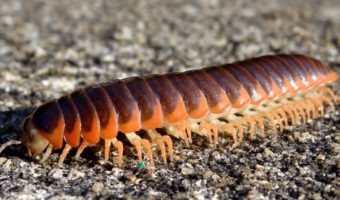 Millipedes are arthropods in the class ‘diplopoda’.

This class contains around 10,000 species, 15 orders and 115 families. Millipedes are found in most parts of the world from back gardens to Rainforests, on all continents except Antarctica.

The Class Diplopoda is divided into three subclasses.

The subclass ‘Penicillata’ contains 160 species millipedes whose exoskeleton is not calcified (consisting of, or containing, calcareous matter or lime salts) and which are covered in setae (a stiff hair) or bristles.

However, because many species of millipede are burrowers, they have been transported by humans throughout the world in soil and with plants. In fact, half of the species that are native to Britain have been introduced to North America this way.

Millipedes are Myriapods, which means they have long segmented bodies, short heads and many pairs of legs, their numerous legs being their most obvious feature. The name Millipede derives from Latin roots, ‘milli’ meaning ‘thousand’ and ‘ped’ meaning foot. However, despite their name, these creatures do not have thousands of legs.

Some rare species can have 750 legs, however, common species have between 80 and 400 legs. Millipedes have two pairs of legs attached to each segment of its body, except the very first segment behind the head and the next few segments which only have one pair of legs each. Each segment that has two pairs of legs is a result of two single segments being fused together as one. When Millipedes walk, each pair of legs is lifted at the same time, moving along in a wave motion.

Millipede eyes consist of a number of simple flat lens ocelli arranged in a group on the front/side of the head. Millipedes have very poor eyesight which is sometimes nonexistent. They sense their way around by using their antennae which continually taps the ground as the millipede moves along. The head contains a pair of sensory organs found just behind their antennae and are oval shaped. They are probably used to measure the humidity in the surroundings.

Millipedes are very clean creatures and spend a lot of time cleaning and polishing various parts of their body. They have a special brush-like group of hairs on the 2nd or 3rd pair of their legs which they use to clean their antennae.

Most millipedes have very elongated cylinder shaped bodies, although some are flattened dorsoventrally (extending from the back to the belly), while Pill Millipedes are short and can roll into a ball. The giant African millipede (Archispirostreptus gigas) is one of the largest of the millipedes, growing up to 11 inches (28 centimetres) in length. It lives in tropical and subtropical Africa, in rotting plant life or moist earth and usually avoids light. It is black in color and is often kept as a pet.

Millipedes are detritivores (animals that consume decomposing organic material and in doing so contribute to decomposition and the recycling of nutrients). Most millipedes eat decaying leaves and other dead plant matter, moisturising the food with secretions and then scraping it in with the jaws.

A few species are known to feed on animal remains or funguses. Many species will also eat their own waste pellets. It is believed that they obtain nutrition from funguses growing inside the pellets rather than from the waste itself.

Having very many short legs makes millipedes rather slow, but they are powerful burrowers. With their legs and body length moving in a wavelike pattern, they easily force their way underground head first. They are able to reinforce their tunnels by rearranging the particles around it.

Millipedes have a hard exoskeleton helps to protect them against predators. When threatened, they coil up into a ball to protect the more vulnerable underside. Many species also emit poisonous liquid secretions through microscopic pores along the sides of their bodies as a secondary defence. Some of these substances are caustic (substance that causes corrosion) and can burn the exoskeleton of ants and other insect predators. As far as humans are concerned, this liquid is fairly harmless, usually causing only minor effects on the skin, the main effect being discoloration but other effects may also include pain and itching.

Most millipedes lack a waxy layer on the outside of their exoskeletons, or hard outer coverings, that helps to prevent the loss of body moisture. Like centipedes, millipedes spend most of their time in cool wet places and become active only at night or after it has been raining.

Males and females usually have to mate to produce offspring, with males usually depositing sperm directly into the reproductive organs of the female. There may or may not be any courtship behaviour. Bristly millipede males must first spin a web on which they deposit their sperm. The female then approaches the web and puts the sperm into her own reproductive organs. In some pill millipedes a male attracts a female to mate with squeaking noises made by rubbing the bases of his legs against his body. He then grasps the females body with his legs. A sperm packet is released behind his head and passed back from one pair of legs to the next, until it reaches the reproductive organs of the female. In other pill millipedes the male covers the sperm packet in dirt before passing it back with his legs to his mates reproductive organs.

Millipedes lay their eggs in the soil. Some species make individual cases for their eggs out of chewed-up leaves. In some species, the female, and occasionally the male, guard the eggs until they hatch. Although young millipedes resemble small adults, they are usually have no legs when they first hatch from the egg.

After they molt, or shed their exoskeleton for the first time, they have six body segments and three pairs of legs. They add additional body segments and pairs of legs with each molt until they reach the maximum adult number. Millipedes molt in sheltered places underground or in cracks in the soil. This is a very delicate stage of their lives. Millipedes reach adulthood in one or two years, sometimes longer. Adults live for one to eleven years, although some individuals may live longer.

This class of arthropods is thought to be among the first animals to have colonised land during the Silurian geologic period (443 million years ago). These early forms probably ate mosses and primitive vascular plants. The oldest known land creature, Pneumodesmus newmani, was a 1 centimetre long millipede.

No millipedes are considered endangered or threatened.