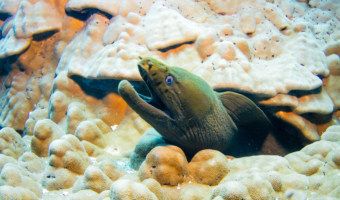 Moray eels, comprising the family Muraenidae, are a family of eels whose members are found worldwide. There are approximately 200 species in 15 genera which are almost exclusively marine, but several species are regularly seen in brackish water, and a few are found in fresh water.

There is a subfamily of Muraenidae; Uropterygiinae. They can be distinguished from each other by the location of their fins.

Moray eels grow to a length of about 1.5 metres, and live in coral reefs and rocky areas, at a depth of about 200m. They feed primarily on smaller fish, crabs, and octopuses.

Moray eels are dangerous, with very sharp teeth that can pierce human skin. However, they are also a popular species among aquarium hobbyists for their hardiness, flexible diets, disease resistance, and charisma.

These animals are not endangered and are listed as Least Concern on the IUCN Red List. However, their population is unknown and they are threatened by water pollution and loss of habitat. They’re also captured and eaten in some countries, which may be contributing to a decline in population. 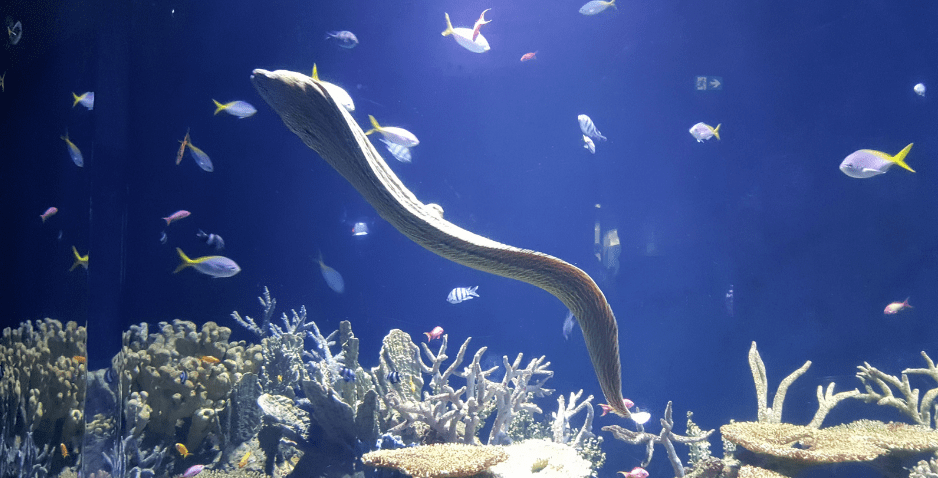 Moray eels can vary in appearance depending on the species. They can measure between 1 and 13 feet long, with the smallest moray being the dwarf, which can be found off the coast of Hawaii. The longest of the species is the slender moray eel at 13 feet long. They also have varying weights, from just a few ounces to 66 pounds.

Colorwise, they can be brown, gray, green, blue, white, orange or yellow. Their body is generally patterned, usually spotted, striped, freckled or mottled. Some moray eels, such as the banded moray eel, can even change their colors to better camouflage. Morays secrete a protective mucus over their smooth, scaleless skin, which in some species contains a toxin. This allows sand granules to adhere to the sides of their burrows in sand-dwelling morays, thus making the walls of the burrow more permanent due to the glycosylation of mucins in mucus.

Another defining feature of the moray eel is their jaw. These animals actually have two jaws! The second set of jaws, known as the pharyngeal jaws, are a characteristic of all fish, but most are located closer to the mouth are used to crush prey. In contrast, the pharyngeal jaws of morays are located farther back in the head and closely resemble the oral jaws (complete with tiny “teeth”). When feeding, morays launch these jaws into the mouth cavity, where they grasp prey and transport it into the throat. These eels are the only animals that use pharyngeal jaws to actively capture and restrain prey in this way.

Different species of this eel have different shapes and sizes of jaw and teeth, reflecting their diets, but all moray eels have a mouth that opens far back into the head, compared to fishes which feed using suction. This allows them to hold onto their prey. 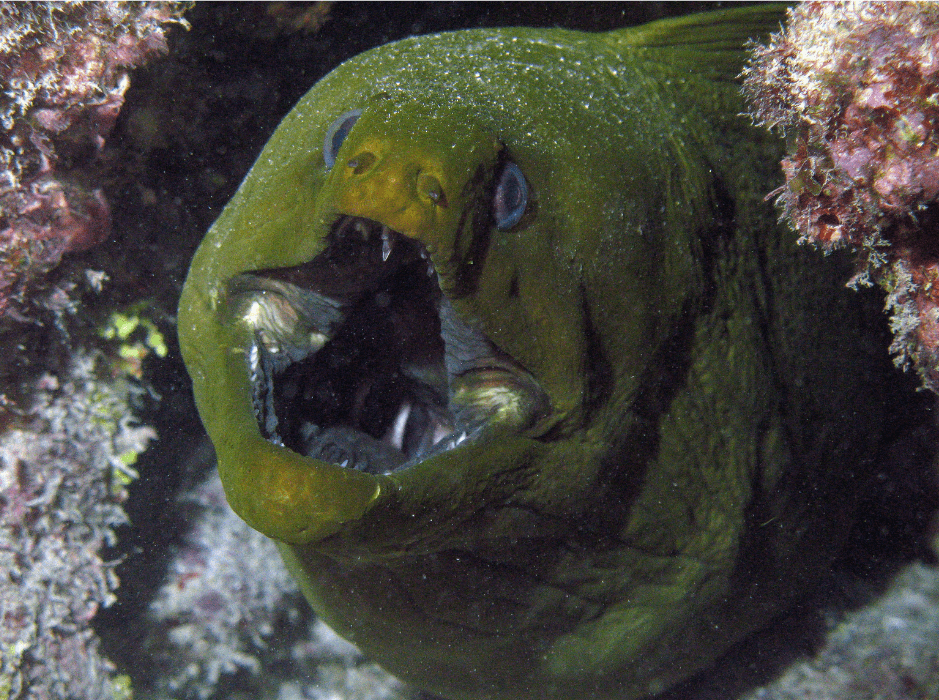 Depending on the species of moray eel, one of these animals can live as long as 10 to 30 years. They are much more likely to live a longer life in the wild than they are in captivity.

A relatively small number of species, for example the snowflake moray and zebra moray, primarily feed on crustaceans and other hard-shelled animals, and they have blunt, molar-like teeth suitable for crushing.

Moray eels have small eyes and therefore rely mostly on their highly developed sense of smell, lying in wait to ambush prey. Sometimes, giant moray eels are recruited by roving coral groupers to help them hunt. The invitation to hunt is initiated by head-shaking.

These eels are nocturnal, which makes it difficult to know their behaviors.

The breeding season for moray eels is between January and February. A female releases around 10,000 eggs and they are fertilized by a male’s sperm. Reproduction is oviparous and actually happens outside the female’s body.

When the eggs hatch, the larvae float along in the open ocean. After about a year, the moray eel larvae are big enough to swim down to the ocean floor and hide in rocks and crevices.

These eels usually reach sexual maturity at around 2.5 years old. 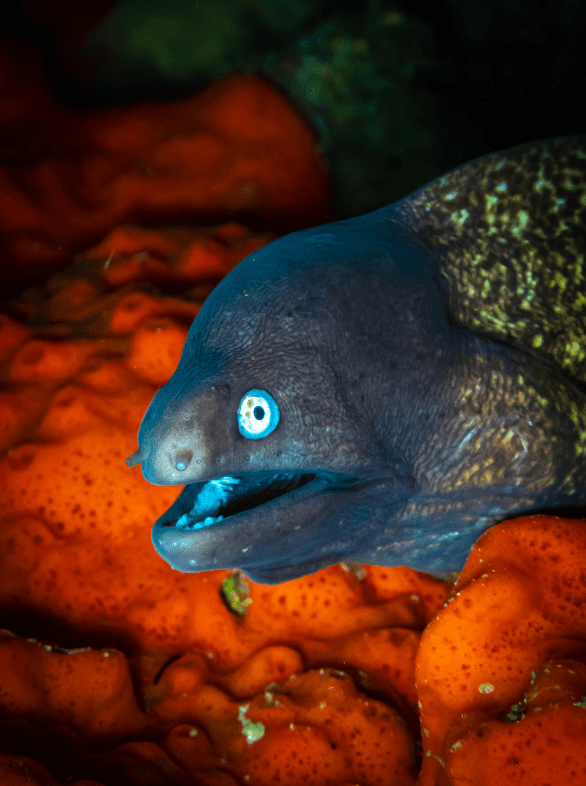 Moray eels live all over the world, in ocean waters that are tropical or temperate. Some species are seen in brackish water, and a few are found in fresh water, too. Their habitat includes coral reefs, caves, continental slopes, continental shelves, deep benthic habitats, and mesopelagic zones of the ocean. They can live in shallow water or as deep down as 600 feet.

According to the IUCN Red List of Threatened Species, the population is unknown, but they are listed as Least Concern. It is difficult to know how many of this species there are, because they hide in rocks and crevices and are nocturnal animals.

The biggest threat to moray eels is water pollution, which can disrupt their ecosystem, would could, in the future, make it difficult for them to find food or reproduce. These eels are also sometimes caught in fishing nets either on purpose or accidentally.

In some countries, such as Germany, Poland, Sweden, and Denmark, moray eels are captured and eaten.

Moray eels are preyed on by groupers, barracudas and sea snakes. However, these are the only animals that prey on them, and some of the larger species are very rarely preyed on. This makes some of the species apex predators.

There are currently around 202 known species of moray eels, divided among 16 genera. These genera fall into the two sub-families of Muraeninae and Uropterygiinae, which can be distinguished by the location of their fins.

The most notable moray eel species are as follows: