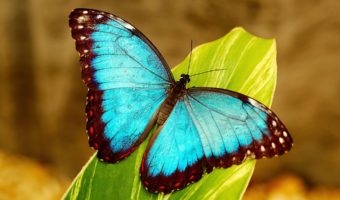 Rainforest Morpho Butterfly A Morpho Butterfly (Morpho menelaus), is one of over 80 described species of butterflies that reside in the rainforests. Morpho butterflies are neotropical butterflies found mostly in Central America as well as Mexico and South America including Brazil, Costa Rica and Venezuela. Morpho Butterflies dwell in the forest canopy layer and rarely come near the understorey and forest floor layers.

However, they have sometimes been observed flying near the ground in clearings. 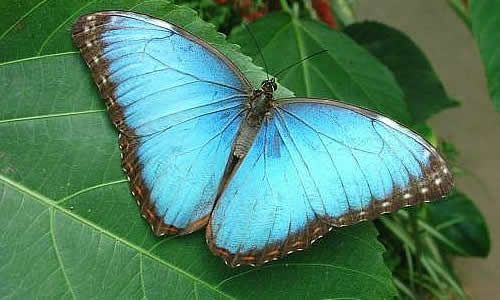 Morpho butterflies range in wingspan from the 7.5 centimetres (3 inches) to the larger 20 centimetres (8 inches) of the Sunset Morpho (M. hecuba).

Many Morpho butterflies are colored in metallic, shimmering shades of blue and green on the upper wing surface. The underside of the wings resembles foliage, with mottled brown, greys, blacks and reds. The female Morpho butterfly is less vivid than the male. The males bright coloring is designed to intimidate any rivals that might fly into his territory. The males wings reflect the bright, iridescent color over an extremely wide angle, to maximize its visibility in the rainforest.

These colors are not a result of pigmentation but rather are an example of iridescence (an optical phenomenon characterized as the property of surfaces in which hue changes according to the angle from which the surface is viewed). The colors produced vary with viewing angle, however they are actually surprisingly uniform, perhaps due to the tetrahedral (diamond-like) structural arrangement of the scales. This structure may be called a ‘photonic crystal’.

The ventral side is decorated with ‘ocelli’ or eyespots. Not all Morpho butterflies have iridescent coloration, however, they all have ocelli. The eyes of Morpho butterflies are thought to be highly sensitive to UV light and therefore the males are able to see each other from great distances.

There also exists a number of white Morpho species. An unusual species that is white in coloration, but which exhibits a stunning purple iridescence when viewed at certain angles. The metallic blue Morpho species (M. rhetenor) stands out as the most iridescence of all.

Morpho butterflies are forest dwellers but will venture into sunny clearings in order to warm themselves. Males are territorial and will chase any would-be rivals.

The Morpho butterfly drinks its food rather than eats it. It uses its proboscis (long, protruding mouth part) to drink sap and fruit juices.

Morpho butterflies taste with sensors on their legs and taste-smell the air with their antennae.

Morpho butterflies are diurnally active (active during the day) and have the capability of ‘crypis’, meaning when they sleep at night, they fold their wings so that only the dark underside is seen, making them less visible to predators. It also has a ‘flashing’ defence mechanism, meaning, due to the slow beating pace of their wings, the iridescent blue is flashed and then disappears as the wings are raised only to return in another place in a short while. This causes predators to loose track of the Morpho butterfly when it is flying as they only glimpse blue flashes as the brown underside makes them invisible in the thick foliage of the jungle.

Like all butterflies, Morpho butterflies pass through four distinct phases of metamorphosis.

First, the pale green eggs that resemble dewdrops hatch into larvae, better known as caterpillars. The caterpillar is red-brown with bright patches of lime-green on its back and has stinging hairs. The hairy brown caterpillars feed on a variety of leguminous plants (a simple dry fruit which develops from a simple carpel and usually opens along a seam on two sides). In some species the caterpillars are cannibalistic. If disturbed, some Morpho caterpillars will secrete a fluid smelling of rancid butter. The tufts of hair decorating the caterpillars have been recorded to irritate human skin.

After a while, the caterpillars wrap themselves in a protective enclosure, called a chrysalis. At this stage the insects are called pupae. After some time, pupation ends and the mature butterfly emerges from its chrysalis.

The entire life cycle of the Morpho butterfly, from egg to death, is approximately 137 days. The adults live for about a month. They have few predators as the adults are poisonous due to the feeding caterpillar sequestering poisonous compounds (the process of animals accumulating poisonous compounds from the food they are eating in order to become poisonous themselves for their predators). But like all butterflies, adult morphos were plant-chomping caterpillars as youngsters. Blue morpho caterpillars are especially fond of leaves in the pea family.

Not listed by the IUCN.

Interesting notes about the Morpho Butterfly

The Morpho butterfly has intrigued man for generations with its optical engineering. Today, its dazzling iridescent wings are giving rise to a market to try to mimic its wonder and create a counterfeit proof currency and charge cards. This butterfly may become world famous as its power with light changes the face of money.