You are here: Home / Animals / Moth 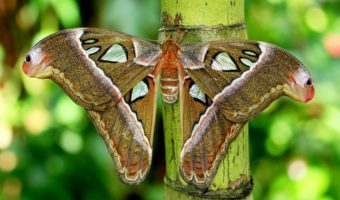 Moths are insect closely related to butterflies. Both belong to the order Lepidoptera. The differences between butterflies and moths is more than just taxonomy. Scientists have identified some 200,000 species of moths world wide and suspect there may be as many as five times that amount.

Moths often have feather like antennae with no club at the end. When perched, their wings lay flat. Moths tend to have thick hairy bodies and more earth tone colored wings. Moths are usually active at night and rest during the day in a preferred wooded habitat.

Moths have very long proboscis, or tongues, which they use to suck nectar or other fluids. These proboscis are very tightly coiled not in use, like a hosepipe. When in use, the proboscis are uncoiled to their full length and in some species, that length is remarkably long. The Hummingbird Moth has a tongue that is actually longer than its whole body. The Darwin’s Hawk moth of Madagascar has a proboscis nearly 13 inches long, evolved, no doubt, to enable feeding on deep throated orchids which grow in that region.

Not all Moths have long tongues. In some, the proboscis is very short, an adaptation which enables easy and effective piercing of fruit.

In some, there is no feeding mechanism at all. There are adults of some species that do not take in any food. Their brief lives as an adult are spent reproducing and they are able to acquire all of the energy needed for this from the fat stored in the body by the caterpillar.

A moths antennae, palps, legs and many other parts of the body are studded with sense receptors that are used to smell. The sense of smell is used for finding food (usually flower nectar) and for finding mates (the female smelling the males pheromones). Pheromones can be dispersed through the tibia segment of the leg, scales on the wings or from the abdomen. Pheromones released by females can be detected by the males from as much as 8 kilometres away.

Camouflage is a great defence in avoiding detection by a hungry predator. Some moths look just like lichen, others look exactly like the bark of trees native to their habitat. It has even been noticed that in city areas where smoke pollution is strong, some moths have actually developed a darker coloration than the same species that live in less polluted areas.

Another effective form of camouflage is coloration which can confuse a predator into either striking at a none vital part of the moths body or into missing it all together. The lines and spots on these moths would make aiming in on it difficult, especially when it is moving.

Another form of defence is where the moth takes on the appearance of a larger/or more threatening creature. This amazing ability is called ‘mimicry’. This form of defence ranges from caterpillars with tails that look like a large venomous snakes head, to moths and butterflies whose markings make them appear to be large birds.

Moths (like many other adult insects) have compound eyes and simple eyes. These eyes are made up of many hexagonal lens/corneas which focus light from each part of the insects field of view onto a rhabdome (the equivalent of our retina). An optic nerve then carries this information to the insects brain. They see very differently from us. they can see ultraviolet rays (which are invisible to us).

The vision of Moths changes radically in their different stages of life.

Moth caterpillars can barely see at all. They have simple eyes (ocelli) which can only differentiate dark from light. They cannot form an image. They are composed of photoreceptors (light-sensitive cells) and pigments. Most caterpillars have a semi-circular ring of six ocelli on each side of the head.

A caterpillars ‘fuzz’ gives it its sense of touch. Caterpillars sense touch using long hairs (called tactile setae) that grow through holes all over their hard exoskeleton. These hairs are attached to nerve cells and relay information about the touch to the insects brain.

Setae (sensory hairs) on the insects entire body (including the antennae) can feel the environment. They also give the insect information about the wind while it is flying.

Moths navigate by two methods. They use the moon and stars when available and geomagnetic clues when light sources are obscured.

Moths heat up their flight muscles by vibrating their wings, since they do not have the radiant energy of the sun (being nocturnal) at their disposal to serve that purpose.

Other interesting facts about Moths

Night-blooming flowers usually depend on moths (or bats) for pollination, and artificial lighting can draw moths away from the flowers, affecting the plants ability to reproduce. A way to prevent this is to put a cloth or netting around the lamp. Another way is using a colored light bulb (preferably red). This will take the moths attention away from the light while still providing light to see by.

Despite being framed for eating clothing, most moth adults do not eat at all. Most like the Luna, Polyphemus, Atlas, Prometheus, Cercropia and other large moths do not have mouths. When they do eat, moths will drink nectar. Only one species of moth eat wool. The adults do not eat but the larvae will eat through wool clothing.

Moths, and particularly their caterpillars, are a major agricultural pest in many parts of the world. The caterpillar of the gypsy moth (Lymantria dispar) causes severe damage to forests in the northeast United States, where it is an invasive species. In temperate climates, the codling moth causes extensive damage, especially to fruit farms. In tropical and subtropical climates, the diamondback moth (Plutella xylostella) is perhaps the most serious pest of brassicaceous crops (the mustard family or cabbage family).

Butterflies and moths hear sounds through their wings.

Butterflies and moths both have an organ called the Johnston’s organ which is at the base of a butterfly or moths antennae. This organ are responsible for maintaining the butterflys sense of balance and orientation, especially during flight.

A Cecropia moth has the ability to smell his mate up to 7 miles away with his feathery antennae.

The Sphinx Hawk moth is the fastest moth in the world, capable of reaching speeds over 30 miles per hour.