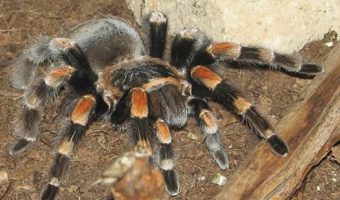 New World Tarantulas mainly found in the Americas, have bites that generally pose little threat to humans (other than causing localized pain). The primary means of defence for these spiders are urticating hairs, which can cause irritation and other typical symptoms in humans.

Urticating hairs are one of the primary defence mechanisms used by some tarantulas and lepidopteran caterpillars.

Urticating hairs are barbed hairs that cover the dorsal and posterior surface of the Tarantulas abdomen. Many Tarantula species will frequently kick the urticating hairs off their abdomens, directing them towards potential attackers. These hairs can embed themselves in the other animals skin or eyes and cause physical irritation.

Urticating hairs on Tarantulas do not appear at birth. They form with each consecutive molt, developing around areas of dark hairs on the upper back, part of the abdomen of juveniles, widening from molt to molt. In older Tarantulas, the urticating hairs merge with the main tone of their abdominal coloration.

New World Tarantulas, when faced with danger, will turn towards the attacker and briskly rub their hind legs against the opisthosoma (the posterior portion of the spiders body) throwing the urticating hairs in the direction of the enemy.

The latest studies suggest urticating hairs from Tarantulas present not just a mechanical but a chemical influence on the skin and mucous membranes. The cloud of small hairs will get into the mucous membrane of small mammals and cause edema (the increase of interstitial fluid in any organ), which can be fatal.

The amount of irritation of the urticating hairs can vary greatly between species of Tarantula.

The urticating hairs of the Chilean Rose Hair (Grammastola rosea) and the Pinktoe Tarantula (Avicularia avicularia), are fairly mild to humans. Chilean Roses are usually nervous, running away from danger rather than acting defensively, however, they have been known to raise their front legs and present their fangs in preparation to defend themselves.

The urticating hairs of the Brazilian Giant White Knee Tarantula (Acanthoscurria geniculata), native to Brazil, are moderately irritating. This species is relatively large, with a leg span of up to 8.5 inches. Unlike many of the larger terrestrial tarantulas, it is very colorful in its appearance, due to the brilliant white stripes that are present on its leg joints.

The urticating hairs on tarantulas such as the Goliath Birdeater (Theraphosa blondi), the largest spider in the world, are far more severe. These hairs can result in painful rashes and have been compared to sharp shards of fibreglass. These spiders have up to a 30 centimetre (12 inches) long leg span when fully extended and can weigh over 120 grams.

After the Tarantula has used this method of defence on an enemy it will have a bald spot on its abdominal region where the hairs have been rubbed off.

New World Tarantula species vary in size from several small species, which may only have a leg span of 7.5 centimetres (3 inches) to other species which may attain leg spans of 17.5 centimetres (7 inches) or slightly larger as in the Goliath Birdeater tarantula (12 inches).

Most species will average in size from 10 centimetres (4 inches) to 12.5 centimetres (5 inches) in leg span and are less robust in body size than

Most are colorful or patterned and many are colored in bright metallic hues of bronze, pink, green, blue, purple or gold on the carapace, trochanters and femurs of the legs.

Most New World Tarantulas are covered in both short and long setae (stiff hair, bristle, or bristle-like process or part of an organism). Some species are densely covered in short, silky setae.

The setae covering the legs of many species give some Tarantulas a sculpted, streamlined appearance in comparison to others which typically appear more robust and ‘shaggy’ in appearance. The males of some species are more profusely covered in longer setae than the females.

Apart from several popular members of the genus Avicularia, which includes the Pinktoe tarantula, the Goliath pinktoe, Ecuadorian woolly, the Yellow-banded pinktoe, the White-toe tarantula, the Venezuelan redstripe, the Ecuadorian purple, the Peruvian pinktoe and the Antilles pinktoe that are maintained in captivity and are known for their complacent and calm behaviours, the majority of the members of the remaining five genera and several Avicularia species are typically highly strung, fast, nervous, unpredictable and display varying degrees of defensiveness when disturbed, startled or handled.

Defensive behaviours range from the tactile introduction of abdominal urticating setae by members of the genera Avicularia.

New world tarantula spiders mainly eat insects and other arthropods, caught by speed or ambush. The biggest animals a Tarantula can kill are as large as lizards, mice or birds.

The tarantulas mouth is located under its chelicerae on the lower front part of its prosoma. The mouth is a short straw-shaped opening which can only suck, meaning that anything taken into it must be in liquid form.

Prey with large amounts of solid parts such as mice must be crushed and ground up or predigested, which is accomplished by spraying the prey with digestive juices that are excreted from openings in the chelicerae.

The tarantulas digestive organ (stomach) is a tube that runs the length of its body. In the prosoma, this tube is wider and forms the sucking stomach. When the sucking stomachs powerful muscles contract, the stomach is increased in cross-section, creating a strong sucking action that permits the tarantula to suck its liquidized prey up through the mouth and into the intestines.

Once the liquidized food enters the intestines, it is broken down into particles small enough to pass through the intestine walls into the haemolymph (blood stream) where it is distributed throughout the body.

Individuals that have reported rare bites from New World Tarantula species have indicated nothing more than the initial pain caused by the mechanical action of the bite itself and minor local effects such as redness and swelling at the site of the bite.

Once a male spider reaches maturity and becomes motivated to mate, it will weave a web mat on a flat surface. The spider will then rub its abdomen on the surface of this mat and in so doing release a quantity of semen. It may then insert its pedipalps (short leg-like appendages between the chelicerae and front legs) into the pool of semen.

The pedipalps absorb the semen and keep it viable until a mate can be found. When a male spider detects the presence of a female, the two exchange signals to establish that they are of the same species.

These signals may also lure the female into a receptive state. If the female is receptive then the male approaches her and inserts his pedipalps into an opening in the lower surface of her abdomen.

After the semen has been transferred to the receptive females body, the male will generally quickly leave the scene before the female recovers her appetite. Although females may show some aggression after mating, the male rarely becomes a meal.

Females deposit 50 to 2000 eggs, depending on the species, in a silken egg sac and guard it for 6 to 7 weeks. The young spiderlings remain in the nest for some time after hatching where they live off the remains of their yolk sac before dispersing.

Tarantulas usually live in solitude and being cannibalistic, will attack and eat others of their own kind.