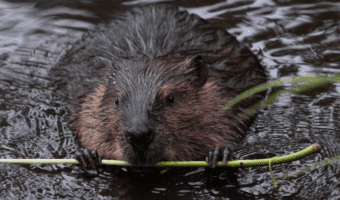 The North American Beaver (Castor canadensis) is a semi-aquatic mammal, of the order rodentia. They are one of two extant species, the other being the Eurasian Beaver.

Historically, the North American beaver was widespread across the whole North American continent, from coast to coast and from Mexico up the the Arctic Rim. Despite almost being hunted to extinction, populations have bounced back in recent decades, and they maintain much of their original range.

These beavers have a heavy dependency on water for both sustenance and protection. Their ability to modify the environment around them is not only beneficial to their species but also the whole ecosystem, thus earning them notoriety as a keystone species.

The first traces of the beaver were found in fossils from Germany, estimated to have existed approximately 10-12 million years ago. Early species crossed the Bering Strait – which would have been a land bridge at the time, and entered America at least 7 million years back. When sea levels rose this species became isolated from the Eurasian populations and evolved separately.

North American Beavers are one of the largest rodents in North America, with average adults ranging between 30 to 80 pounds. In terms of size, they range between 74–90 cm (29–35 in) across the head and body, with a tail length adding between 20–35 cm (7.9–13.8 in) to their average total length.

They have thick fur that ranges from reddish-brown to nearly black, but most of the North American species have pale brown fur. In terms of shape, they have a wide body that is well adapted for swimming, and two layers of fur that provide insulation and waterproofing, allowing them to spend lots of time in the water.

These creatures have four webbed digits on their hind feet, which helps them move quickly and efficiently in the water. Their front feet are not webbed, but have very sharp claws. Additionally, beavers have incredibly sharp front teeth that are continuously growing throughout their lifetime.

These long, curved incisors are used to cut down trees and construct their lodges and dams. Their teeth also allow them to access the cambium and soft bark within these trees for food. They will always choose to build their colony within a good location to suitable trees, and to water that they can manipulate.

Finally, they have a broad flat tail that is used for swimming and slapping against the surface of the water as a warning sign.

Differences Between The North American Beaver And The Eurasian Beaver

North American Beavers are found widespread across their native North America and Canada, and some populations have also been introduced to areas in Scandinavia and the southern tip of South America.

They inhabit a wide range of habitats, including forests, meadows, wetlands, prairies and even rivers. Beavers are best known for constructing dams on streams and rivers to create deep pools that they use as protection around their home.

Beavers live in colonies which are led by a dominant pair that often mates for life. They typically reside in a large den or lodge built from sticks and mud, which is covered in vegetation for added protection. The lodges have multiple entrances that are submerged underwater to avoid potential predators.

North American Beavers feed on a variety of vegetation such as leaves, twigs, bark, buds and aquatic plants. They particularly enjoy consuming woody plants like willow, maple, cottonwood and aspen, which they cut down with their sharp front teeth.

Despite some reports, it is incredibly rare for a beaver to eat animals. While once considered to be omnivores, it is more commonly believed that the North American beaver eats a herbivorous diet predominantly.

You can read more about what beavers eat here.

The North American Beaver are renowned for their incredible engineering skills. They are masters of manipulating their environment to create the habitat they need. These skills help them to create dams, lodges and canals for which they are famed.

These little engineers are quite social creatures within their own colonies, but can be territorial toward others. During the day, they can be seen swimming around their lodges or foraging for food in groups. They use a variety of techniques to secure their food sources such as cutting down trees and building dams on streams to create small ponds where they can feed on aquatic vegetation. They are also known to build make-shift ‘fridges’ against the walls of their lodges, for storing food.

When threatened, these animals will slap their tail against the water to warn away predators or alert other members of the colony. Additionally, they are excellent swimmers and can remain submerged underwater for up to 15 minutes while searching for food or escaping danger.

Within the family unit, older siblings help the adults to run the family unit, finding food and looking after their younger infant siblings. A beaver colony is a truly functional family, all members contribute and make it work.

Beavers are one of the few species of animals that are monogamous. Once mated, they stay together for life. The exception to this is if one beaver dies, the other will then attempt to find a new partner.

Pregnancy of a female lasts for around 3 months before giving birth. Birthing takes place in a specific room within the beaver lodge. A litter will usually have between 1 to 6 babies, which are called kits. These kits reach maturity at around the age of two, and at this time they move on to try to form their own colony. They generally don’t become sexually active however, until around 3 years of age.

A new colony will consist only of two mating beavers until they have their first litter. Depending on the volume of kits born in their litters, a colony can be up to 12-13 beavers, but this is more than the norm.

The beaver family will consist of mating adults, with their offspring from two years. Colonies or families tend to consist of only one mating pair and their offspring. It is a tight knit group and can often be territorial. They will chase off other beaver colonies that trespass on their territory.

North American beavers are preyed upon by a variety of predators including wolves, mountain lions, bears, owls and even humans. These creatures rely on their sharp hearing to detect potential danger in the form of approaching predators. As such, they live in colonies where there is always someone on the lookout for any potential threats. This can’t protect them from all predators though. One particular threat, the Black Bear, is known to smash their way directly into a lodge to get to their meal.

These animals are at their most vulnerable when they come of age and leave their colony. In the time when they are on their own and without the protection of family, they are at high risk from predators like coyotes, bobcats and foxes.

North American Beavers are not considered to be endangered, and are listed as a species of Least Concern on the IUCN Red List. They were however, once hunted to near extinction across the North American continent, mostly for their fur which was traded widely.