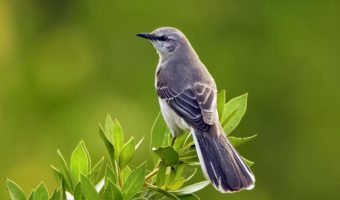 The Northern Mockingbird is one of the most fascinating creatures in North America. This small songbird has an interesting history and a unique appearance.

The northern mockingbird is an omnivore that feeds on insects as well as fruits. It forages in grassy land and is commonly found in open areas and forest edges. Southeastern Canada, the United States, northern Mexico, the Bahamas, the Cayman Islands, and the Greater Antilles are all breeding grounds for the northern mockingbird. It is replaced further south by the tropical mockingbird, its closest living relative.

The Mockingbird is so revered that it is the state bird of Arkansas, Florida, Texas, Tennessee, and Mississippi.

The Mockingbird has a white chest and underside, as well as light gray tones. They measure about 10 inches in length when including the tail. Two white spots may be seen within the Mockingbird’s 14-inch wingspan while it is flying.

The Northern Mockingbird is a medium-sized, brownish gray songbird with a black tail that has distinctive white outer feathers and a black center tail feather.

The beak of the Northern Mockingbird is thin black and brown. Their eyes are yellowish to orange in color, have a faint dark eyeliner, and have a thin dark

Mockingbirds prefer to build their nests close to the ground in thick, thorny bushes. The shrubs they pick also include a high lookout perch where the male Mockingbird will keep a lookout for any danger and sing to defend his territory.

Males and females work together to construct thick, open nests out of mostly grass and twigs. They usually create two nests each year, but sometimes three or four nests in response to weather conditions. They do not migrate far from their nesting site throughout the year.

Mockingbirds need open areas where they can feed. The main food of mockingbirds is insects, such as beetles, ants, grasshoppers, and spiders. They also will eat winter berries and seeds.

The Mockingbird’s name comes from the fact that it imitates the songs of other birds. One bird may have up to 200 distinct songs, although most have at least 25 and perhaps as many as 30.

Mockingbirds have the ability to mimic the sounds of various invertebrates, amphibians, and inanimate noises like squeaky gates, pianos, or sirens.

They are tenacious defenders of their nesting grounds, and will dive bomb cats and dogs that get too close, as well as mimic them.