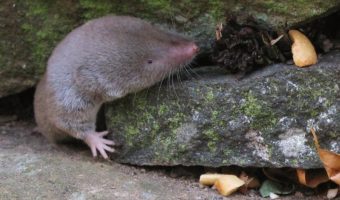 The Northern Short-tailed Shrew (Blarina brevicauda) is a large shrew found in central and eastern North America from southern Saskatchewan to Atlantic Canada and south to Nebraska and Georgia. At one time, this species and the Southern Short-tailed Shrew (Blarina carolinensis), were considered to be a single species, however, they are now classed as seperate species.

The Northern Short-tailed Shrew is a small, mouse-sized insectivore with a very short tail, short limbs, a pointed muzzle and tiny eyes and ears concealed by fur. The Northern Short-tailed Shrews fur is a dense slate grey and slightly lighter underneath. Its head and body length is 10 centimetres including a 2 centimetre tail and it weighs around 21 grams about as heavy as a Common House Mouse.

The abundant Short-tailed Shrew digs through the forest litter or tunnels in moist soil. This shrew is active mostly during early morning and late afternoon. Their day is organized around highly active periods lasting about 4.5 minutes, followed by rest periods that last, on average, 24 minutes. The Northern Short-tailed Shrew does not hibernate. Their winter mortality rate is as high as 90%.

Male Northern Short-tailed Shrews are territorial and mark their burrows with glandular secretions, the odour of which keeps other males out. Venomous mammals are rare, so also see the solenodon, platypus and water shrew.

Mating begins in early spring and may occur until late September. Gestation is 21 days or more and two to possibly four litters, each of 5 – 7 young, are born per year usually in a nest in a tunnel or under a fallen log.

Glands in the Northern Short-tailed Shrews mouth contain a neurotoxin (a toxin that acts specifically on nerve cells) which allows it to immobilize larger animals such as snakes and birds. Cannibalism is not uncommon between these Shrews – If not able to find food within about a two-hour period, these small mammals will attack and eat each other.