You are here: Home / Animals / The Numbat 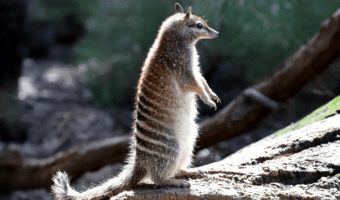 The numbat (Myrmecobius fasciatus), also known as the noombat or walpurti is a marsupial belonging to the Myrmecobiidae and the genus Myrmecobius. The numbat was once widespread across southern Australia, but is now restricted to several small colonies in Western Australia. This makes it an endangered animal, and it is listed as Endangered on the IUCN Red List.

The numbat first became known to Europeans in 1831. It was discovered by an exploration party who were exploring the Avon Valley under the leadership of Robert Dale.

The numbat genus Myrmecobius is the sole member of the family Myrmecobiidae, one of four families that make up the order Dasyuromorphia, the Australian marsupial carnivores. Two subspecies of the numbat have been described, but one of these — the rusty colored Myrmecobius fasciatus rufus — has been extinct since at least the 1960s, and only the nominate subspecies (M. fasciatus fasciatus) remains alive today.

It is an insectivore and its diet consists almost entirely of termites. Characterized by a slender body with white stripes, narrow pointed snout, small mouth with numerous small teeth, and a long, sticky tongue. It is also often known as the banded anteater and marsupial anteater. 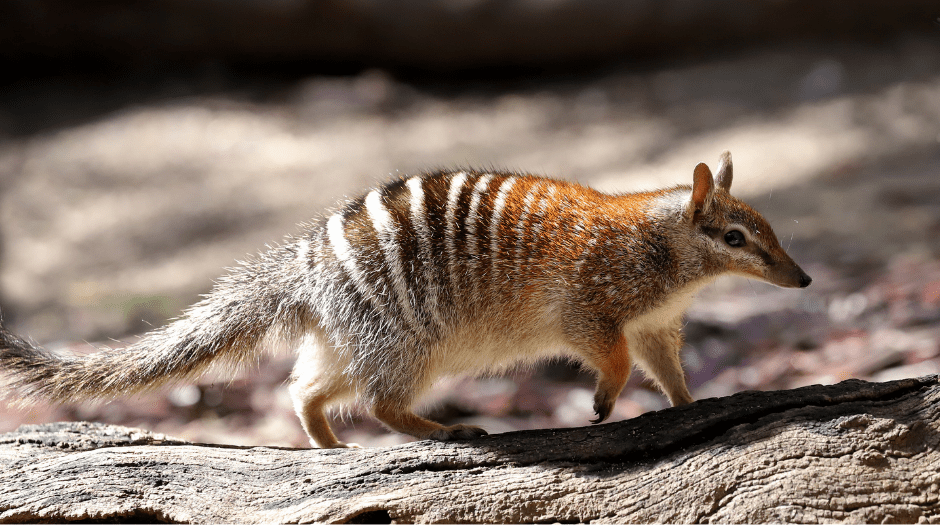 It has thick and short hair, which can vary in color greatly, from soft gray to reddish-brown, often with an area of brick red on the upper back. They always have a conspicuous black stripe running from the tip of the muzzle through the eyes to the bases of the ears. There are between four and eleven white stripes across the animal’s hindquarters, which gradually become fainter towards the mid-back. The underside is cream or light gray, while the tail is covered with long gray hair flecked with white. The hair on the tail tends to be slightly longer than the hair on the body.

They have a finely pointed muzzle, a small mouth, and small, round-tipped ears. The numbat has an unusually long, narrow, tongue, coated with sticky saliva produced by large submandibular glands. The tongue can reach to 10 centimeters long when they open their mouths! They have a degenerate jaw with up to 50 very small non-functional teeth, and although the numbat is able to chew, it rarely does so, because of the soft nature of its diet. It does, however, have numerous ridges along the soft palate, which apparently help to scrape termites off the tongue so that they can be swallowed.

Numbats have five toes on their forefeet and four toes on their hindfeet, with all four feet having thick and large claws. They also have a prominent and bushy tail.

Interestingly, unlike most marsupials – such as the kangaroo – in which the females typically have an external pouch where the newborn are nursed, numbat females have no pouch. However, the four mammae (milk-secreating teats) are protected by a patch of crimped, golden hair and by the swelling of the surrounding abdomen and thighs during lactation.

Numbats lack the ability to retain water well in their kidneys, which is unusual for animals in the environment in which they live. They are able to gain a considerable amount of water from their diet. They also have a strong scent gland for marking their territory.

The average lifespan for males or females in the wild is four to five years, as compared to seven years for a female and eleven years for a male in captivity. Their lifespan is generally short because they are preyed on by foxes, raptors, and cats.

The numbat’s diet consists primarily of termites and they eat approximately 15,000 to 20,000 termites per day. They use their elongated snout for getting into logs and small holes to locate the termites and use their long tongue to retrieve the termites. Other features the termites possess for preying include complex salivary glands and their razor-sharp claws that are used for digging into termite galleries in the soil.

The digestive system of the numbat is relatively simple, and lacks many of the adaptations found in other entomophagous animals, presumably because termites are easier to digest than ants, having a softer exoskeleton.

Although the numbat finds termite mounds primarily using scent, and has a very strong sense of smell, allowing the animal to find termite galleries are as far as 50 mm below the surface of the soil, it also has the highest visual acuity of any marsupial. This is likely an adaptation for its diurnal habits, and vision does appear to be the primary sense used to detect potential predators. 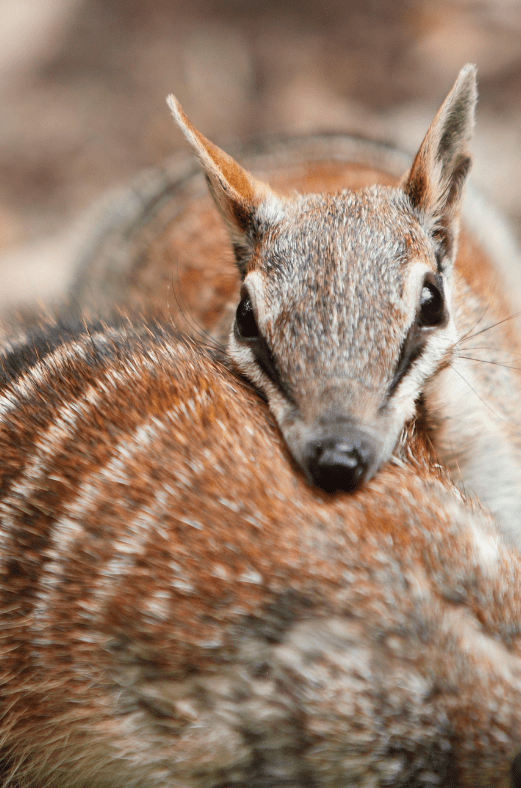 The numbat is diurnal and the only marsupial that is fully active by day. They synchronize their day with termite activity, which is temperature dependent. In winter, the numbat feeds from mid-morning to mid-afternoon, but in summer, they rise earlier, and take shelter during the heat of the day and feed again in the late afternoon.

Adult numbats are typically solitary and territorial. They establish a territory of up to 1.5 square kilometers (370 acres) early on in life and defend it from others of the same sex, and generally remain in that territory for the rest of their lives. Male and female territories occasionally overlap, and males will venture out of their territory for breeding.

Numbats sleep in nests at night, usually hollow logs, trees, or burrows, which are around 1-2 meters long. They line these with soft plant material such as grass, leaves and flowers, and will block the entrance to prevent predators from getting in.

When numbats roam, they walk or trot with a jerky movement. They can reach speeds of 32 km per hour when threatened. Occasionally they will stop to feed, while continuing to scan their surroundings for predators. When sitting, they take on the appearance of dasyurids, which are small carnivorous marsupials of Australia. Sitting vertically on their hind feet, numbats will keep their forepaw raised in alert. When excited or stressed, numbats arch their tail over their back and erect their fur.

These animals produce a variety of vocalizations, which are mainly used during the breeding season. If a female and male are both interested in one another, they will vocalize this by producing a series of soft clicks. However, a female will also produce a growling noise if she is rejecting a males advances.

Numbats will also make noise when they are protecting their territory. These are usually hissing growls, which are similar to sounds the species makes when they are handled.

Outside of this, the only other time thry can be heard is when a mother is caring for her young. The mother communicates with them by soft chirping sounds.

Leading up to the mating season, males will venture out to find a mate. When a male desires a certain female, he will follow her and pay particularly close attention to her cloacal region by sniffing it. Both the male and female will vocalize to one another, producing sounds that are composed of a series of soft clicks.

When a male has found a female, he smears an oily, foul-smelling substance from his sternal gland around the female’s territory, which wards off other males.

Numbats breed in February and March. Copulation can take less than one minute to an hour and the male may leave immediately in order to mate with another female, or he may stay in the den until the breeding season is over. Numbats are not monogamous and males may mate with multiple females in one year.

Female normally produce one litter a year. The gestation period is around 14 days, after which around four young are born. When born, newborn numbats range in length from less than 20 mm to 75 mm, and the snout is extremely shortened. The young nurse for up to 9 months, until about July or August. In late September, the young begin to forage for themselves, becoming independent and moving to a territory of their own by November.

When the young reach the length of approximately 30 mm, a light downy coat arises, and this coat eventually bears the characteristic white stripes when they reach about 55 mm in length.

Males play no part in raising the young. The reproductive cycles are seasonal, with the female producing one litter per year. The female is polyestrous, which means she has several estrous cycles during a single breeding season. Thus, females that have failed to conceive or have lost their young may conceive again with a subsequent mate.

The numbat were originally found across southern Australia from Western Australia across as far as northwestern New South Wales. However, since the arrival of Europeans, numbat have become extinct in 99% of their range. The species has survived only in several remnant populations in two small patches of land in the Dryandra Woodland and the Perup Nature Reserve, both in Western Australia. In recent years, it has, however, been successfully reintroduced into a few fenced reserves, including some in South Australia (Yookamurra Sanctuary) and New South Wales (Scotia Sanctuary).

Numbats were historically found semi-arid and arid woodlands and grasslands. However, today they are found in areas of eucalypt forest. These are located at an elevation of approximately 317m, in the wettest edge of the former range because of the abundance of old and fallen trees. The logs of eucalypt woodlands play a great role in aiding in the survival of numbats.

The numbat needs to live in an area where there are many termites for them to eat. If areas are too wet or too cold, termites will not flourish, and, thus, neither will numbats. 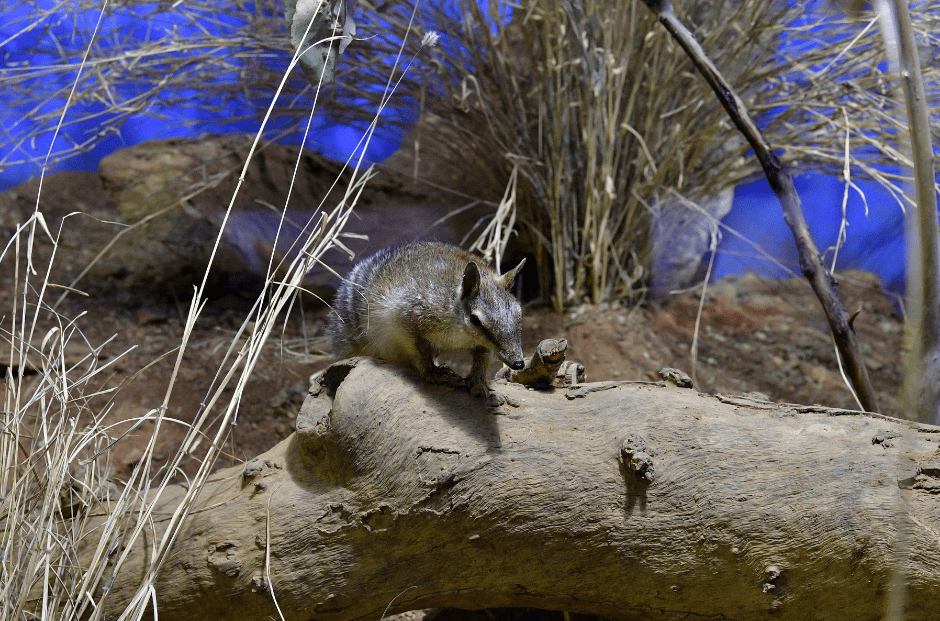 Numbats are currently listed by the US Fish & Wildlife Service and the IUCN Red List an Endangered. The numbat population has decreased rapidly in recent years, and it is thought that less than 1,000 remain in the world.

The introduction of predators such as red foxes and raptors is mostly to blame for the decrease in their population, as well as other predators of the numbat such as rabbits and rats. Deforestation has also had a big effect on this species, resulting in habitat loss including the loss of logs and hollow trees. Deforestation has also contributed to the reduction in termites, which is the numbat’s primary food source.

Conservation efforts have been made to help with this endangered species, which include captive breeding, reintroduction programs, protected areas, and red fox control programs.

Because of the small size of the numbat, they are easy prey to many animals. The most common predators of these animals are red foxes, raptors and feral cats. They can also be taken by carpet pythons, and large lizards, such as sand goannas.

The numbat is constantly on alert when roaming and feeding and detects threats from predators primarily by sound (hearing the predator’s approach) and vision (seeing their approach). They will freeze if they sense they are in danger, or run at fast speeds into their burrow. Numbats may also try to ward off predators by producing low-throaty growls along with a repetitive “tut tut tut.”

Numbats are very important to the ecosystem because they help to control termite populations. Ants can also accidentally be consumed by them, when they eat termites. There are no known adverse effects of numbats on humans.