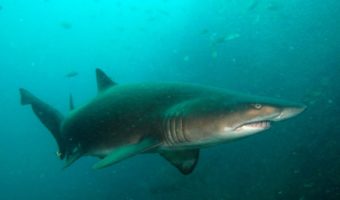 The Nurse Shark is a common inshore bottom-dwelling shark, found in tropical and subtropical waters on the continental and insular shelves. The Nurse Shark is frequently found at depths of one metre or less but may occur down to 12 metres. Its common habitats are reefs, channels between mangrove islands and sand flats. 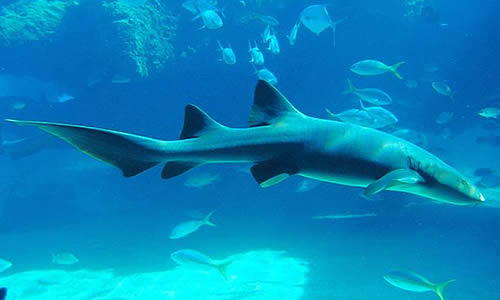 Nurse sharks are light yellowish brown to dark brown, with or without small dark spots. The Nurse shark has a flattened body and a broad, rounded head with two conspicuous barbells between the nostrils which are used to help find food. Their mouth is filled with rows of small, serrated teeth for crushing hard-shelled prey. Female nurse sharks, average 7.5 to 9 feet (2.2 to 2.7 metres) in length and weigh 165 to 230 pounds (75 to 105 kilograms) and are slightly larger than male nurse sharks.

The estimated age of maturity for the Nurse Shark is 18 years for males and 20 to 22 years for females.

Nurse sharks are nocturnal animals, spending the day in large inactive groups of up to 40 individuals. Hidden under submerged ledges or in crevices within the reef, the Nurse sharks seem to prefer specific resting sites and will return to them each day after the nights hunting. By night, the sharks are largely solitary. Nurse sharks spend most of their time foraging through the bottom sediments in search of food. Their diet consists primarily of crustaceans, molluscs, tunicates and other fish such as spiny lobsters, crabs, shrimps, sea urchins, octopuses, squid, marine snails and bivalves and in particularly, stingrays.

Nurse sharks are thought to take advantage of dormant fish which would otherwise be too fast for the sharks to catch, although their small mouths limit the size of prey items, the sharks have large throat cavities which are used as a sort of bellows valve. In this way, Nurse sharks are able to suck in their prey. Nurse sharks are also known to graze algae and coral.

The mating season runs from late June to the end of July. Nurse sharks are ovoviviparous, meaning the eggs develop and hatch within the body of the female where the hatchlings develop further until live birth occurs. The gestation period is 6 months, with a typical litter of 21 – 28 pups. The mating cycle is biennial, as it takes 18 months for the females ovaries to produce another batch of eggs. The young Nurse sharks are born fully developed at about 30 centimetres long. They possess a spotted coloration which fades with age.

Because the Nurse shark can pump water over its gills, it does not need to swim in order to breathe, like other sharks do.

The Nurse shark is not widely commercially fished, but because of its sluggish behaviour it is an easy target for local fisheries. Its skin is exceptionally tough and is prized for leather. Its flesh is consumed fresh and salted and its liver utilised for oil. It is not taken as a game fish. It has been reported in some unprovoked attacks on humans but is not generally perceived as a threat.

Nurse sharks are common throughout their range but are still considered ‘Near Threatened’.

No species is known to regularly prey on Nurse sharks, although they have been found in the stomach contents of lemon sharks, tiger sharks, bull sharks and great hammerhead sharks.