The Okapi (Okapia johnstoni) is a mammal located in the Ituri Rainforest in the north east of the Democratic Republic of the Congo in central Africa.

Although it has striped markings similar to those of the zebra, it is more closely related to the giraffe.

Native just to the Ituri rainforests, it was known only to the local people until 1901. 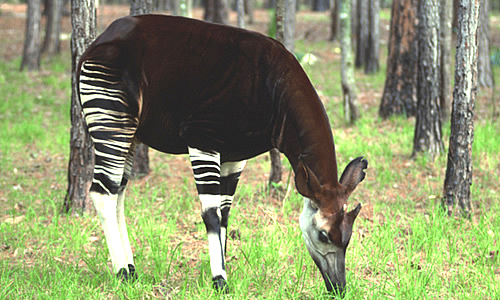 The Okapis velvet-like coat is generally dark chestnut-brown or purplish red in colour, with distinctive pattern of horizontal stripes, much like those of a zebra, on the upper legs. These markings are thought to help young follow their mothers through the dense rainforest. The stripes also help the Okapi to camouflage away from predators. Their lower legs are white, with dark garters at the joints. The vaguely horse-like head is generally lighter, with a black muzzle and is supported by a thick neck.

Okapis have large ears, which help them detect predators, mainly the leopard. Their black/blue tongue is long and prehensile. Both Okapis and Giraffes have very long, flexible tongues measuring around 30 centimetres (12 inches) long. They both use their tongues to strip leaves and buds from trees. The tongue of an okapi is long enough for the animal to wash its eyelids and clean its ears. It is one of the few mammals that can lick its own ears. Their body is sloped, with the forequarters much higher than the rear. Male okapis have short, skin-covered horns called ‘ossicones’ on their forehead which develop between one and five years of age.

Okapis eat tree leaves and buds, grass, ferns, fruit and fungi. Many of the plant species fed upon by the okapi are known to be poisonous to humans.

Examination of okapi faeces has revealed that the charcoal from trees burnt by lightning is consumed as well. Field observations indicate that the okapis mineral and salt requirements are filled primarily by a sulphurous, slightly salty, reddish clay found near rivers and streams.

Okapis live in the clearings and forest areas of the rainforest that are not dense with foliage. Okapis forage along fixed, well-trodden paths through the forest. They live alone or in mother-offspring pairs. Okapis have overlapping home ranges of several square kilometres.

The home ranges of males are generally slightly larger than those of females. Okapis are not social animals and prefer to live in large, secluded areas. This has led to problems with the Okapi population due to the shrinking size of the land they live on. This lack of territory is caused by development and other social reasons. However, Okapis tolerate each other in the wild and may even feed in small groups for short periods of time.

Okapis prefer altitudes of 500 to 1,000 metres, but may venture above 1,000 metres in the eastern montane rainforests. The range of the Okapi is limited by high montane forests to the east, swamp forests below 500 metres to the west, savannas of the Sahel/Sudan to the north and open woodlands to the south. Okapis are most common in the Wamba and Epulu areas.

Okapis are largely diurnal (active during the day) and essentially solitary, coming together only to breed. Okapis have several methods of communicating their territory, including scent glands on each foot that leave behind a tar-like substance which signals their passage, as well as urine marking. Males are protective of their territory, but allow females to pass through their domain to forage.

Okapi have a reproduction period of approximately 14 -15 months and give birth to a single infant. Young Okapis are born from August to October. Expectant mothers retreat into dense forest to give birth, after which the newborn lies hidden for several days. The young do not seem to bond on their mothers and have been observed nursing from two different females.

Although Okapis are not classified as endangered, they are threatened by habitat destruction and poaching. The world population is estimated at 10,000 – 20,000. Conservation work in the Congo includes the continuing study of okapi behaviour and life styles, which led to the creation in 1992 of the Okapi Wildlife Reserve. The Congo Civil War threatened both the wildlife and the conservation workers in the Reserve.

There is an important captive breeding centre at Epulu, at the heart of the reserve, which is managed jointly by the Congolese Institute for Nature Conservation (ICCN) and Gillman International Conservation (GIC), who in turn receive support from other organisations including UNESCO, the Frankfurt Zoological Society and Wildlife Direct as well as from zoos around the world. The Wildlife Conservation Society is also active in the Okapi Wildlife Reserve.

The okapi was known to the ancient Egyptians. Shortly after its discovery by Europeans, an ancient carved image of the animal was discovered in Egypt. For years, Europeans in Africa had heard of an animal that they came to call ‘the African unicorn’.

In his travelogue of exploring the Congo, Henry Morton Stanley mentioned a kind of donkey that the natives called the ‘atti’, which scholars later identified as the okapi. Explorers may have seen the fleeting view of the striped backside as the animal fled through the bushes, leading to speculation that the okapi was some sort of rainforest zebra.

Okapi are now reasonably common in zoos around North America and Europe. Immediately following their discovery, zoos around the world attempted to obtain Okapis from the wild. These initial attempts were accompanied by a high mortality rate due to the rigours of traveling thousands of miles by boat and by train. In more recent years, shipment by airplane has proven more successful.