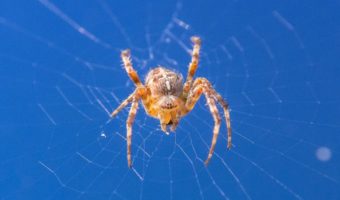 Because there are so many different species of Orb Weavers, they differ in color shape and size. The commonly seen Garden Orb Weavers are 2 to 3 centimetres in length for the female and 1.5 to 2 centimetres for the male in body length. Most are stout, reddish-brown or grey spiders with a leaf-shaped pattern on their fat, roughly triangular abdomens, which also have two noticeable humps towards the front. Orb Weaver Spiders sometimes have a dorsal stripe which may be white or brown edged with white.

Golden Orb Weavers are large spiders with a body length of 2 to 4 centimetres with silvery-grey to plum colored bodies and brown-black, often yellow banded legs. The males are tiny measuring only 5 millimetres and red-brown to brown in color. The main difference between the common Sydney species (Nephila plumipes) and Nephila edulis (which is more common in inland regions) is the presence of a ‘knob’ on the front of the sternum (the heart shaped plate on the underside of the body between the legs) of Nephila plumipes.

Humped Orb Weavers or Silver Orb Weavers are easily recognised by their silvery body, with yellow or green and black markings. They have long bodies and long limbs, with a body length of about 1 centimetre. The abdomen often has rounded ‘shoulder’ humps that give these spiders their common name.

Orb-weaving spiders are three-clawed builders of flat webs with sticky spiral capture silk. The building of a web is an engineering feat, begun when the spider floats a line on the wind to another surface. The spider secures the line and then drops another line from the centre, producing a ‘Y’ shape. The rest of the web is then constructed before the final sticky capture spiral is woven into place. Some species of Orb Weaver spiders remain in their webs day and night.

Some Orb Weaving spiders do not build webs at all. Members of the genera Mastophora in the Americas, Cladomelea in Africa and Ordgarius in Australia produce sticky globules instead, which contain a pheromone analog (a chemical that triggers a natural behavioural response in another member of the same species). The globule hangs from a silken thread dangled by the spider from its front legs. The pheromone analog attracts male moths of only a few species. These get stuck on the globule and are reeled in to be eaten. Interestingly, both types of bolas spiders (unusual orb-weaver spiders that have given up spinning the typical web. Instead, they hunt by using a sticky ‘capture blob’ of silk on the end of a line) are highly camouflaged and difficult to locate.

One feature of the webs of some orb-weavers is the ‘stabilimentum’, a crisscross band of silk through the centre of the web. It is found in a number of genera, but Argiope, which includes the common garden spider of Europe as well as the yellow and banded garden spiders of North America, is a prime example. The band has been hypothesized to be a lure for prey, a marker to warn birds away from the web and a camouflage for the spider when it sits in the centre of the web.

Humped Orb Weavers build small flimsy, horizontal webs among shrubs and grasses or over water. They remain in their webs during the day and capture flies and other small insects.

Most arachnid webs are vertical and the spiders usually hang with their head downward. A few webs, such as those of orb-weaver in the genus Metepiera have the orb hidden within a tangled space of web. Some Metepiera are semi-social and live in communal webs.

Orb Weaver spiders mainly each insects as their main diet.

The female Garden Orb Weaver lays her eggs in late summer to autumn. The eggs are encased in a fluffy silken cocoon and attached to foliage. The life span is about 12 months. They mature in summer, mate, lay their eggs and die in late summer-autumn. Males and females are similar in size. During autumn, the spiderlings disperse by ballooning (floating on the breeze using small silk strands as ‘balloons’) and build their own tiny orb webs among vegetation.

In the Golden Orb Weaver group, it is common for a number of tiny (6 millimetre) males to live around the edges of a females web, waiting for a mating opportunity. After mating, the female Golden Orb Weaver wraps her single egg sac in a mass of golden silk, which is then hidden on foliage away from the web, disguised within a curled leaf or sprig of twigs.

Predators of orb weavers include several bird species and wasps of the family Sphecidae. The wasps land on the web, lure the spider to the perimetre by imitating a struggling insects vibrations and then carry the spider away to be paralysed and stored as live food for their young.