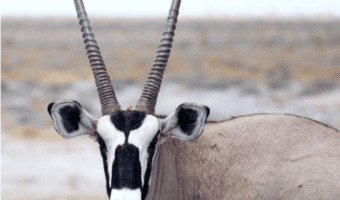 An Oryx is the common name given to 3 or 4 different species of large antelope that live in Africa and the Middle East. These species are: Scimitar-horned Oryx (Oryx dammah) of the North African deserts who are now possibly extinct in the wild and only have small populations living in protected areas. Arabian Oryx (Oryx leucoryx), which is the smallest species and lived the Arabian Peninsula before it became extinct in the wild in 1972.

East African Oryx (Oryx beisa), found in Eastern and Southern Africa (East Africa has 2 types of oryx: Fringe-eared oryx (Oryx g. callotis) and Beisa oryx (Oryx g. beisa)). The Gemsbok is also considered an oryx and is closely related to the East African Oryx. In recorded history, the only antelope to become completely extinct was the South African Blue Buck which disappeared around 1800. Since then, however, most species of antelope have declined in numbers, coming close to extinction. Among the most threatened are the Addax, Scimitar Horned Oryx and the Arabian Oryx all of which are over hunted for their prized horns. 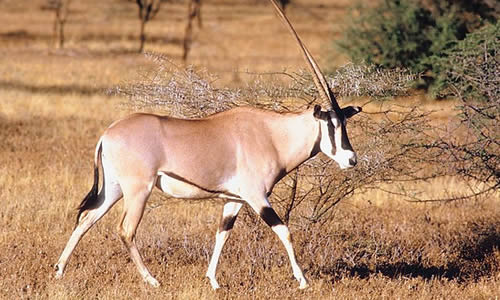 The oryx stands 1.4 metres (4.6 feet) at the shoulder and can weigh more than 200 kilograms (450 pounds). They have a head and body length of between 1.5 and 2.3 meters (4.9 to 7.5 feet). Oryx are very striking in appearance and all have distinctive long horns (both male and female have horns). Horns are made out of keratin just like our fingernails and they grow on an antelopes head during its lifetime. Their horns are very powerful weapons and oryx have been known to kill lions with them, that is why they are sometimes referred to as ‘Sabre Antelopes’.

The horns of the oryx are long (around 30 inches), narrow, ringed and straight except for the Scimitars which curve backwards. Oryx have thick set necks with short manes and compact, muscular bodies. What makes the oryx such a beautiful creature is their characteristic markings on their bodies, face and legs. Their markings are black in color which contrast with their white faces and fawn colored bodies. These black distinctive markings begin on the faces and extend down the throat and chest, along their back and down to their flanks.

The forelegs of an Oryx are white and have black rings above the knee. They have a black tasseled tail and black tipped ears. Their light colored coat helps them reflect the heat of the sun.

The Arabian oryx is a uniform white, while the flank stripe is absent or only faint. The scientific name for the Arabian oryx, Oryx leucoryx, means ‘white oryx’. Their legs darken in the winter to absorb more of the suns heat.

The Oryx prefers hot and arid environments such as steppes, deserts and semi deserts. They are well adapted to cope with the extremely hot climate.

Oryx are herbivores and feed in the early morning and late afternoon. Their diet consists of thick leaves, melons, rough grass and thorny shrubs. They also dig for tubers and roots in the ground. Oryx can survive without water for very long periods of time. Their kidneys are designed to minimise the loss of water through their urine and they only sweat when their body temperature exceeds 116 degrees Fahrenheit (46 degrees centigrade). The vegetation that the oryx consumes collects dew and provides both food and water.

Some oryxes are territorial and some are not. Those who are tend to mark their areas with their dung. Those who are not territorial live with herds of females and their young. Herds of 10 – 40 individuals are common, however, some herds can contain over 200 animals particularly in Eastern African habitats.

Most herds are led by the eldest male in the group. Herds have large ranges which they move slowly through, sometimes trotting. Their keen sense of smell enables them to sense when rain is falling in the area and they will head towards the rain to feed on the new growth of vegetation. The herds move to different areas as the seasons change.

Male dominance is decided with conflicts to test their strength. Clashing of horns is sometimes involved. However, once the hierarchy is established, the need to fight is reduced.

Predators of the oryx include lions, wild dogs and hyenas.

There is no specific breeding season for the oryx, however, general birth patterns are from December through to April. This is because the winter rains influence conception. After a gestation period of 8 – 9 months the female gives birth to a single calf. Calves weigh around 10 kilograms at birth. The newborn calf is hidden away for 2 – 3 weeks with the mother visiting 2 – 4 times daily to feed it.

Calves are brown at birth and their markings develop when it is old enough to join the herd. Calves are suckled for 6 – 9 months. The female oryx will enter her estrous cycle again soon after giving birth. Oryxes reach maturity at 18 – 24 months. The life span of an Oryx can be up to 20 years in preferred grazing conditions, however, droughts can reduce life expectancy greatly.

The Scimitar Horned Oryx is now listed as extinct in the wild where they once lived in North Africa. However, captive breeding programs have been a success and they have been reintroduced in Tunisia. Similar conservation programs around the world also exist for the other species of oryxes. Zoo populations of these desert antelopes are thriving because of cooperation between North American and European zoos.