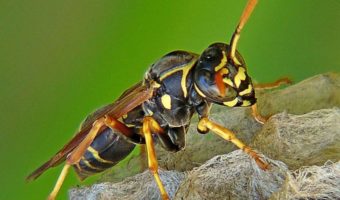 Paper wasps are 3/4 to 1 inch long, slender, narrow-waisted wasps with smoky black wings that are folded lengthwise when at rest. Paper wasps are usually brown with yellow markings on the head, thorax and bands on the abdomen. Paper wasps should not be confused with yellowjackets and baldfaced hornets. Paper wasp nests are open and cells are not covered with a cap (in an envelope). 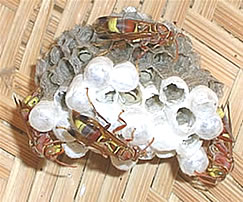 Paper wasp colonies contain three castes: workers, queens and males. Fertilized queens, which appear similar to workers, hide themselves through the winter in protected habitats such as cracks and crevices in structures or under tree bark. In the spring they select a nesting site and begin to build a nest (nests are built from wood fibre collected from posts and occasionally from live plant stems).

Eggs are laid individually in cells and hatch into legless grub-like larvae that develop through several stages (instars) before pupating. Cells remain open until developing larvae pupate. Sterile worker wasps assist in building the nest, feeding young and defending the nest. A mature paper wasp nest may have 20 to 30 adults.

In late summer, queens stop laying eggs and the colony soon begins to decline. In the fall, mated female offspring of the queen seek over-wintering sites. The remainder of the colony does not survive the winter and dies off.