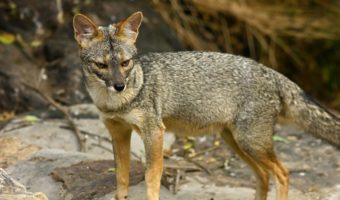 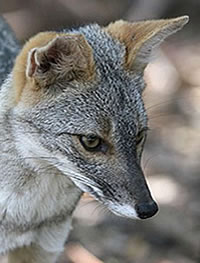 The Peruvian Fox measures around 60 centimetres in length, has a tail length of 25 centimetres and weighs 4 – 5 kilograms. Their fur is grey with a reddish tinge, their underparts pale and their long, bushy tails are black tipped. They have long ears and small teeth that are adapted to feed on dry plants and insects and fox-like canine teeth.

Peruvian Foxes have sharp, curved claws that help them to dig for food and to make their dens. They also have insulating fur which keeps them warm on cold desert nights.

Foxes long bushy tails are also called ‘sweeps’ as they help the fox change direction quickly when running. Their tails also keep their nose and feet warm when curled up asleep.

The Peruvian Fox is a desert dwelling animal and lives in dens dug into the ground. Other habitats include forests, scrub, plains, grasslands and Arctic snow.

Peruvian Foxes are a nocturnal creatures and they rest in their dens during the day. Like all foxes, they are intelligent animals and can confuse their predators by doubling back on the tracks they make with their paws.

Other than the fact that the young are born in October, nothing is known about their social life or breeding habits. Their gestation period, size of litter, age at sexual maturity and longevity are unknown.

Currently, the population is estimated to number fewer than 15,000 mature individuals and is thought likely to experience a continuing decline nearing 10% over the coming decade largely as a result of ongoing habitat loss and degradation combined with persecution. The Peruvian Fox is therefore listed as ‘Near Threatened’.