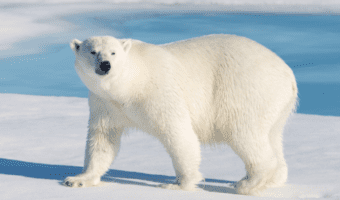 The Polar Bear is found in the coastal areas throughout the Arctic. Polar Bears are semi-aquatic mammals that live on the fringe of vast ice fields that surround the North Pole. The Polar Bear is the worlds largest carnivore species found on land. Although it is closely related to the brown bear, it has evolved to occupy a narrow ecological niche, with many body characteristics adapted for cold temperatures, for moving across snow, ice and open water and for hunting seals which make up most of its diet.

Polar Bears have a thick fur coat either white or cream in color, which helps them blend into their surroundings and stay hidden from prey although their black noses sometimes gives them away. A Polar Bears skin, visible only on the nose and footpads, is black. The black color enables the bear to absorb sunlight energy to warm its body. Polar bear fur is oily and water repellent. The hairs do not become matted when wet, allowing the polar bears to easily shake free water and any ice that may form after swimming. Polar Bears have a relatively narrow head with a long muzzle and long neck. 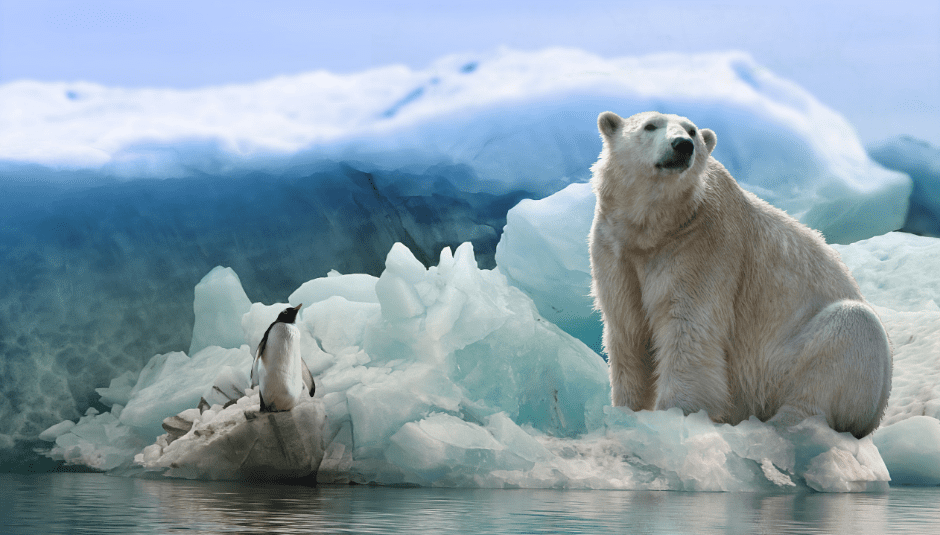 Polar Bears have proportionally longer necks than other types of bears so that they can lunge after seals and other aquatic prey more easily.

Polar Bears have small ears and a short tail about 7 to 12 centimetres (2.8 – 4.7 inches) long. A polar bears eyes are dark brown, set relatively close together and face forward. They have a thick set, stocky body, 4 strong legs and very broad feet with hairy soles to keep them warm and give good grip on the ice. Their broad feet also serve as good paddles when swimming in the water.

The forepaws are round and partially webbed. The hind paws are elongated. Each toe has a thick, curved, non retractile claw. The claws are used for grasping prey and for traction when running or climbing on ice. Their hind limbs are longer than the forelimbs. This makes the large, muscular hind end stand higher than the shoulders. Feet are five-toed paws.

The intestines of a Polar Bear are adapted to digest the fats of marine animals. Polar can grow to measure 2.5 metres (8.4 feet) in length. They are the largest bears weighing up to 500 kilograms (1100 pounds).

With their thick, white fur and powerful claws, Polar Bears are very well adapted to life on the packed ice. However, they are not so different from other types of bear. The adaptability of the basic body plan is what makes mammals so successful, as being warm-blooded, they can keep their body temperature at a constant level.

Polar Bears move slowly and rest often to avoid overheating. Excess heat is released from the body of the Polar Bear through areas where fur is absent or blood vessels are close to the skin. These areas include the muzzle, nose, ears, footpads, inner thighs and shoulders. Polar Bears also swim to cool down on warm days or after physical activity.

Polar Bears inhabit ice fields or dug out dens in the snow.

Although Polar Bears are mostly carnivores and are dependant up on the fat of marine mammals for much of its energy, the Polar Bear is a highly adaptable opportunist omnivore and in times of need, will eat berries, kelp and rubbish. Growing Polar Bears eat the meat of marine animals while adults eat mainly Seal blubber.

Polar Bears need an average of 2 kilograms (4.4 pounds) of fat per day to obtain enough energy to survive. A Ringed Seal weighing 55 kilograms (121 pounds) could provide up to 8 days of energy for a Polar Bear. Polar Bears are natural scavengers and are thought to ‘play with their food’. They do this before killing it (like a cat would). This action is thought to be practice for hunting and prey-handling techniques. Their main prey are Ringed Seals and sometimes Bearded Seals, but they will eat anything they can kill including young Walruses, Whales, Fish, Sea Birds and Caribous.

Polar Bears cover vast distances in search of food, swimming across water and coming far inland. Polar Bears sometimes dig down into Seal dens and eat new born Seal pups. These bears can smell Seals up to 60 kilometres across the ice. Polar Bears tend to gain a lot of weight during the summer months because they have less opportunities to feed during the winter. Polar Bears do not drink water, they obtain all their moisture from the food that they eat. Hibernating Polar Bears do not eat. 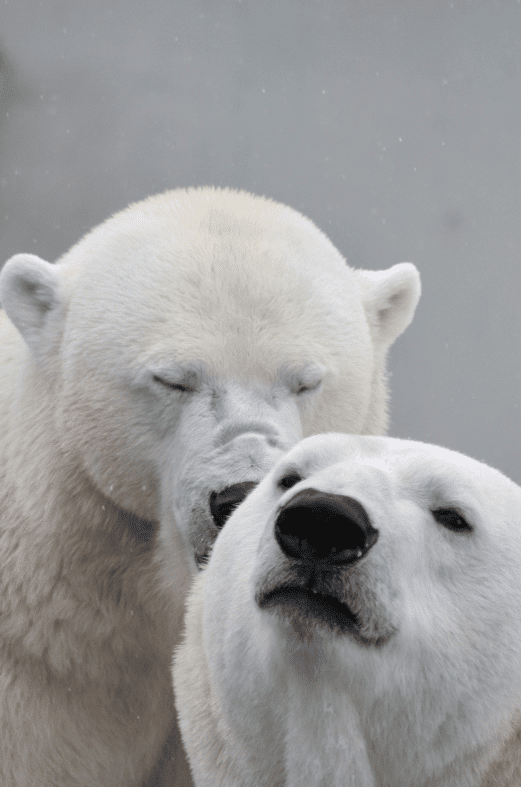 Polar Bears spend much of their time sleeping or roaming the ice in search of Seals. Adults are good swimmers, however, small cubs drown easily. For this reason, young families stay close on solid ice. Polar Bears are typically solitary, males and females come together to mate for just a few days in late winter or early spring. Pregnant females overwinter in dens dug into the snow within a few kilometres of the coastline.

The Polar Bears home range and territories are huge and can measure up to 125,000 square kilometres (48,250 square miles) because their prey is sparsely distributed. To hunt their prey, Polar Bears sit very still by a hole in the ice and wait for Seals to surface to breathe. When a Seal appears, the bear strikes it with a front paw and drags it out onto the ice before biting its head.

On the surface of the ice, they rely on their superb camouflage to stalk resting seals. When a resting seal is spotted, they creep up as close as they can and when within range, they can run at around 45 kilometres per hour (30 miles per hour) to capture their prey.

Sometimes, Polar Bears swim under water and come up under an ice floe to tip Seals off. They may also throw huge chunks of ice at Seals to stun them, Even so, only a few hunts are successful, so scavenging is very important. Carcasses of Whales, Walruses, Caribous and Musk Ox are an important source of food.

Polar Bears have an excellent sense of smell and can detect a carcass from a great distance. As natural scavengers, Polar Bears will investigate novel items which can lead to problems near human settlements in the Arctic. Some Polar Bears have suffered serious internal injuries due to eating man-made materials. The retreat of the sea ice in summer can leave Polar Bears stranded on land and unable to reach Seals – their preferred prey therefore, scavenging is the only option if this occurs.

Polar Bears mature at around 6 years. Polar bears breed in the summer months from March through to June. Females give birth in their dug-out overwinter dens where they give birth to 2 -3 tiny cubs. The timing of the birth is sometime during early winter between December and January.

Female Polar Bears are capable of delayed implantation. Delayed implantation assures that the cub is born during the best time of the year for survival and allows the female to get into good physical condition and use her energy for nursing her newborn cubs. Cubs are born covered in fur but with their eyes closed.

Cubs weigh around 600 grams (1,4 pounds). Females remain in hibernation nursing their cubs until April. Females may go without eating for up to 8 months, surviving only on their body fat, while over-wintering and feeding their newborn young. By the time the young family emerge, the cubs may have grown to weigh 10 – 15 kilograms (22 – 33 pounds). The cubs stay with their mother for the next 2 – 3 years during which time she provides for them.

The female will teach her cubs how to hunt and protect the from harm. The most constant social interaction occurs between mother and cubs. Polar bear mothers are attentive, frequently touching and grooming their cubs. Polar Bear cubs chase after and tackle their siblings. The life span of a Polar Bear is around 30 years. 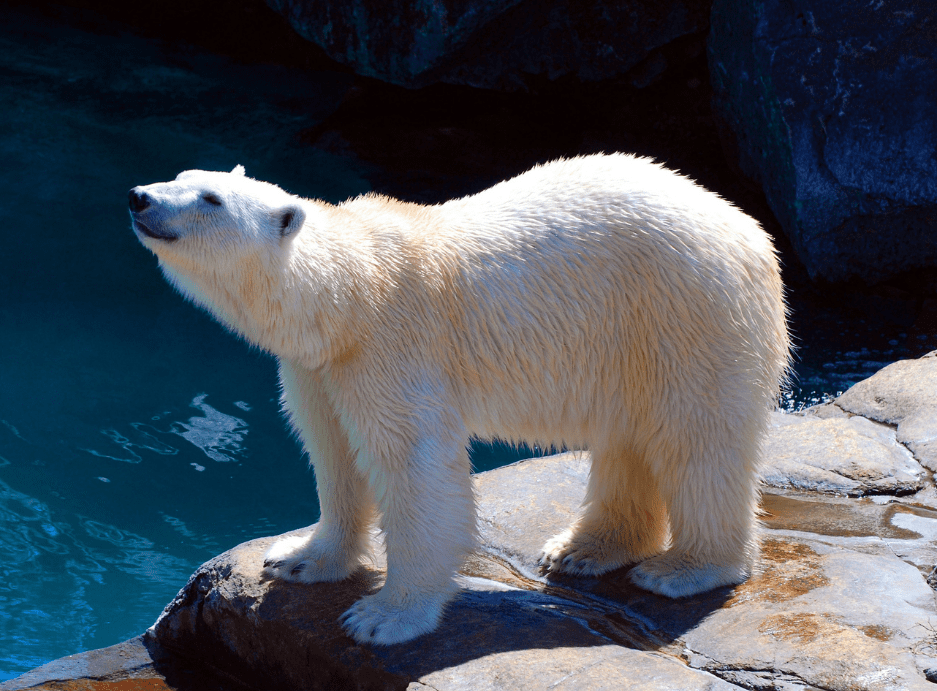 Adult Polar Bears vocalize most when they are agitated or threatened. Sounds include hissing, growling, champing of teeth and chuffing. Cubs vocalize more often and for diverse reasons. Sounds include hissing, squalling, whimpering, lip smacking and throaty rumblings. Mothers warn cubs with a chuffing or braying sound. Polar bears also communicate through sight, touch and smell.

Polar Bears are classed as ‘Vulnerable’ with 5 of the 19 polar bear subpopulations in decline. The IUCN now lists global warming as the most significant threat to the Polar Bear, primarily because the melting of its sea ice habitat reduces its ability to find sufficient food.

The largest Polar Bear recorded weighed 1,002 kilograms (2,210 pounds).Polar Bears completely molt (shed and replace their fur) annually, in May or June. The molt can last several weeks.Little is known about a Polar Bears sense of touch, however, Polar Bears have been observed delicately moving or touching objects with their nose, tongue and claws.Polar bears are most active the first third of the day and least active the final third of the day.Like other bears, Polar Bears can stand on their hind feet and walk upright for short distances.Polar Bears will sometimes engage in play fighting.