You are here: Home / Animals / Polecat 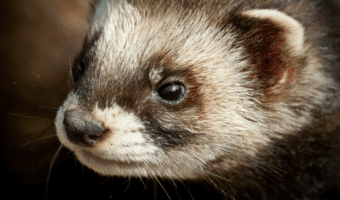 The Polecat (Mustela putorius) is a member of the weasel family (Mustelids) and is also known as a ‘Fitch’ relating to its fur. It is related to stoats, otters, weasels and minks.

Polecats were once widespread and common throughout mainland Britain.

However, due to heavy persecution by gamekeepers up until the late 1930’s, polecats where in decline everywhere except for a small population in North Wales. Recovery of populations has resulted in them now being widespread throughout rural Wales, the Border counties and are spreading across the Midlands, South and into the South-East.

The polecat pre-breeding season population is estimated to be 63,000 and increasing. 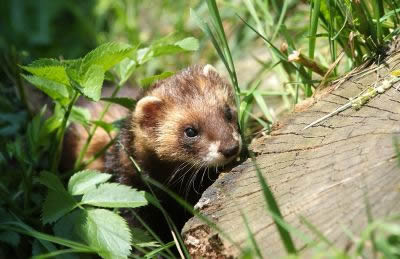 Polecats have long fur which is almost black in color and which has a purple sheen exposing a buff undercoat of fur. They have white bandit-like mask markings on their face and ears. Polecats have long tails and short legs. Polecats are somewhat larger than weasels, weighing between 0.7 kilograms for females to 1.7 kilograms for males, however, they are smaller than otters.

The polecats favoured habitats are woodland, riverbank, farmland buildings and surrounding farmland. They favour lowland country below 500 metres. Polecats often make dens in stream banks or under tree roots. They require a home range of about a square kilometre.

Polecats are solitary in nature, nocturnal and active throughout the year. They emit a pungent musky odour from scent glands located at the base of their tails to mark their territory and particularly when threatened. The polecat is the ancestor of the domestic ferret and can interbreed with them.

Polecats are mainly polygynous, which means having more than one mating partner. Polecats breed once a year, around May or June, producing litters of 5 – 8 kits after a gestation period of 40 – 42 days. Kits are born with white, silky fur and huddle together in cold weather while in hot weather they lay spread apart. The kits are weaned after 4 weeks and fully grown in around 3 months. The average life span of a polecat is 5 years.

Polecats were once almost extinct in Britain. They are considered to be a pest of game and poultry and have been wrongly persecuted for this. They were formerly killed for their fur. Despite diminishing populations, they are not considered to be endangered.

The name polecat comes from the French ‘poule chat’ which means ‘chicken cat’. But they do not actually eat chickens.