You are here: Home / Animals / Porcupine 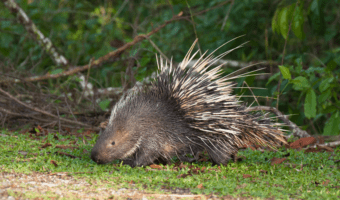 Porcupines (Erethizon dorsatum) are the third largest members of the rodent family that are covered with spines or quills.

The name ‘porcupine’ comes from Middle French ‘porc d’épine’ meaning ‘thorny pig’. There are, in total, 27 species of porcupine belonging to the families, Erethizontidae or Hystricidae.

Porcupines (like monkeys) are divided into New World (Erethizontidae) and Old World (Hystricidae) porcupines and are quite different from each other and are not closely related. 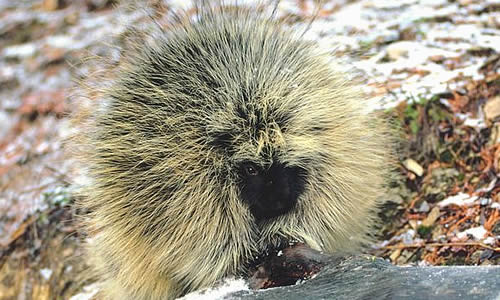 Porcupines vary in size considerably depending on species, however, they generally measure 60 – 90 centimetres (25 – 36 inches) in length (excluding tail which measures 20 – 25 centimetres (8 – 10 inches)) and weigh between 5 – 16 kilograms (12 – 35 pounds). The smallest porcupine is the Rothschilds Porcupine from South America which weighs only 1 kilogram (2.2 pounds). The largest porcupine is the African Porcupine which can weigh over 20 kilograms (44 pounds).

Porcupines have rounded bodies covered with many spines or quills and can be grey, brown or white in color. Their spines are modified hairs coated with thick plates of keratin that are used to defend them from predators. The spines usually lie flattened, however, when threats are posed, the spines spring up as a deterrent to predators. Porcupines have blunt muzzles and small eyes and ears. Their legs are short and sturdy and there are 5 toes on each foot with powerful claws at the ends.

The spines of the New World porcupines have backward facing barbs on the ends that are painful and difficult to remove from skin when embedded. The spines are extremely sharp and will easily detach from the porcupine if touched. Predators have been know to die from being penetrated with a porcupine spine as the barbs are designed to penetrate further into the skin with normal muscle movements.

Porcupine habitats range from deserts, forests and grasslands. Some species of New World porcupines live in trees, however, Old World porcupines are exclusively terrestrial (ground dwellers). Some inhabit rocky regions up to 3,500 metres (11,000 feet) high. They can also be found living in rock crevices, hollow logs and small caves.

Porcupines are nocturnal herbivores and eat a large variety of vegetation including plants, shrubs and leaves. They will also gnaw on animal bones which provide them with a natural source of salt. 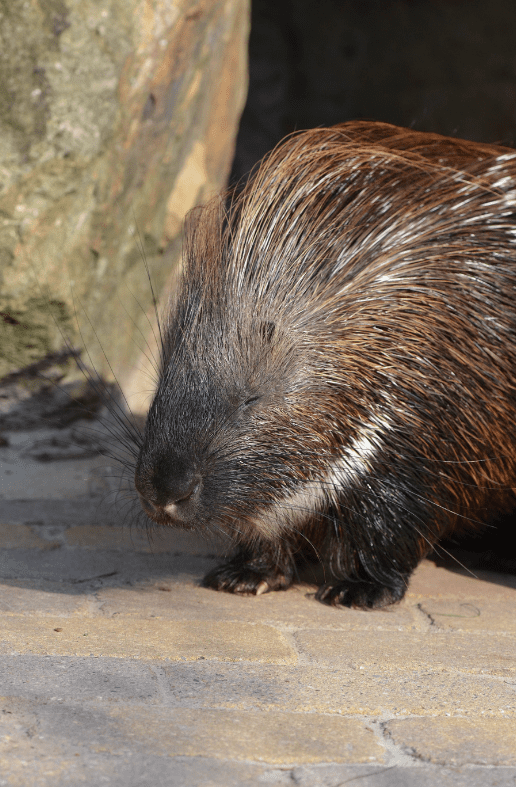 Porcupines have poor vision but have an acute sense of smell. They are very vocal animals and make shrill screeches, whines and low grunts. Porcupines are not territorial animals, however, their home range can be as large as 200 acres. They are very fond of salt licks and sometimes wander into human settlements to find salt sources. They will also gnaw at salt placed down to thaw ice on roads which can lead to death or injury through being knocked by motor vehicles.

Porcupines generally live in family groups of 5 – 6 individuals in complex burrow systems. Some, such as the African Porcupines live in monogamous pairs and form family groups who share the burrows. During the winter, porcupines huddle together for warmth.

Despite their protective exterior, there are some animals that prey upon porcupines. The Fisher (a North American marten) is the most feared predator, however, they are also preyed upon by great horned owls, coyotes, bobcats, mountain lions and wolves. The porcupine will attempt to warn off potential predators by giving out a growl or hiss, stamping its feet, clicking its teeth and vibrating its spines or quills. If this fails, the porcupine will run backwards and ram the attacker which is very affective as the spines face backwards and are more numerous on its rear.

Porcupines have no specific breeding season, however, they have only one litter per year. The female initiates courtship by presenting herself to the male and flattening her spines to enable mating to take place. After a gestation period of 112 days (around 3 months), 1 or 4 young are born, depending on species. Before giving birth, the female will line the maternal chamber of the burrow system with grass and leaves to make the nest comfortable.

Young porcupines are called ‘porcupettes’. Porcupettes have no spines or quills at birth but are covered with sensitive, soft bristles. Their eyes open shortly after birth and they are able to leave the nest after one week. Their spines then develop and harden and they are able to consume solid food at 2 – 3 weeks old. Males help with the parental care of the young. Most young porcupines are ready to live on their own at about 2 months of age. They reach maturity when they are 1 – 2 years old. The average life span of a porcupine is 5 to 7 years in the wild and up to 21 years in captivity.

Some porcupines are ‘threatened’, however most species are abundant and classed as ‘Least Concern’.

The word porcupine means 'quill pig' in Latin, however, porcupines are large rodents and not related to pigs at all.Porcupine quills have long been a favourite ornament and good-luck charm in Africa.The hollow rattle quills serve as musical instruments and were once used as containers for gold dust.porcupines are capable of swimming across wide streams.Porcupines do not throw their quills but dislodge them by shaking their tails.Porcupines are very fond of salt and will gnaw on wooden handles of tools to taste the salty sweat of humans.The name 'porcupine' means 'one who rises up in anger'.