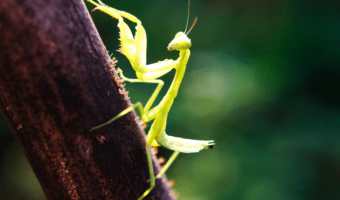 A Praying Mantis, or praying mantid, is the common name for an insect of the order Mantodea. These insects are notorious predators and their name is sometime mistakenly spelled ‘Preying Mantis’ which is incorrect. They are in fact named for the typical ‘prayer-like’ stance.

There are approximately 2,000 mantid species worldwide. The majority are found in Asia. About 20 species are native to the USA.

Like all insects, a praying mantis has a three segmented body, with a head, thorax and abdomen. The abdomen is elongated and covered by the wings in adults.

Females have strong and large cerci (paired appendages on the rear-most segments). The first segment on their thorax, the prothorax, is elongated and from it arises the modified foreleg.

The Praying Mantis has huge compound eyes mounted on a triangular head and have a large range of vision. They use sight for detecting movement of prey and swivel their heads to bring their prey into a binocular field of view.

They have a fully articulated head and are able to rotate it 180 degrees as well as pivot it. Their antennae are used for smell. 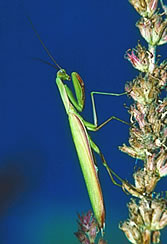 Being a carnivorous insect, the praying mantis feeds primarily on other insects such as Fruit Flies, Crickets, Beetles, Moths and Bees. However, it is not uncommon for larger mantids to consume small reptiles, birds and even small mammals.

To capture their prey, mantids use their camouflage to blend in with the surroundings and wait for the prey to be within striking distance. They then use their raptorial front legs to quickly snatch the victim. It then uses the front legs to help position the victim so it may eat it better.

Praying mantids can be found in all parts of the world with mild winters and sufficient vegetation. Praying mantids will spend most of their time in a garden, forest or other vegetated area.

The primary predators of the praying mantis are frogs, bats, monkeys, larger birds, spiders and snakes. Praying mantids will also prey on each other, usually during the nymph stage and during mating and also when there is no other prey. 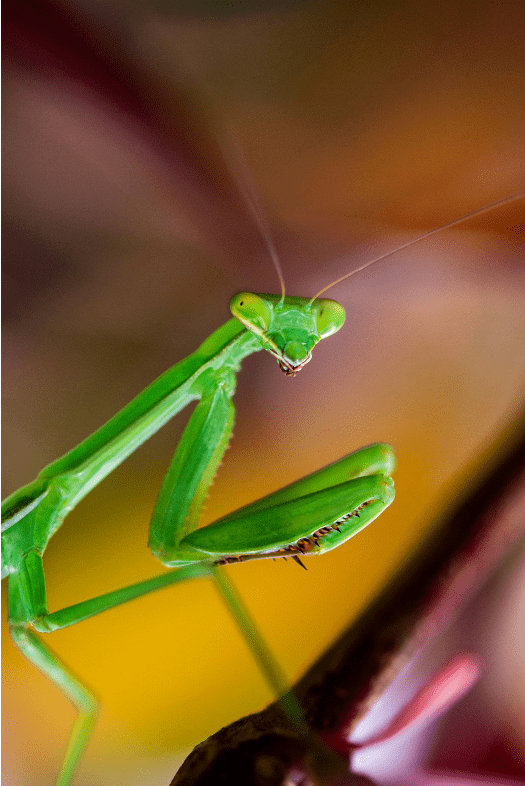 When threatened, praying mantids stand tall and spread their forelegs to allow them to penetrate the target, with their wings fanning out wide and mouths open. The fanning of the wings is used to make the mantis seem larger and to scare the opponent.

Some species have bright colors and patterns on their hind wings and inner surfaces of their front legs for this purpose. If harassment persists, the mantis will then strike with their forelegs and attempt to pinch, bite or slash its opponent. They also may make a hissing sound.

The reproductive process in a majority of mantis species is marked by sexual cannibalism whereby the female eats the male after mating has taken place and is an ongoing subject of research. 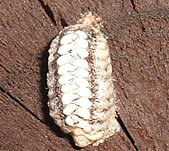 Praying mantids start out life in an ootheca egg mass (an ootheca usually contains many eggs surrounded by a foam of protein which may then harden into a tough casing for protection).

Usually laid in the fall on a small branch or twig, the egg mass then hatches in the spring to early summer as warming temperatures signal the time for birth.

The natural life span of a praying mantis in the wild is about 10 – 12 months, but some mantids kept in captivity have been sustained for 14 months. In colder areas, female mantids will die during the winter.

Males tend to ‘suddenly’ die about 2 to 3 weeks after mating in the fall. This is usually caused by the females urge to kill off the male once the egg pouch has been produced.

Most North American mantids are not included among endangered species however species in other parts of the world are under threat from habitat destruction. The European Mantis (Mantis religiosa) is the state insect of Connecticut, but the General Statutes of Connecticut do not list any special protected status, it is a non-native species from Europe and Northern Africa.

The female praying mantids will eat their sexual partners. Often, they will behead the male before even before they start the mating process!