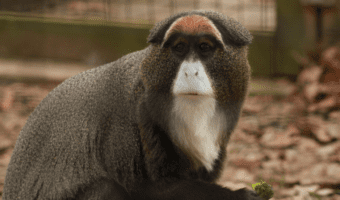 Preuss’s Monkey (Cercopithecus preussi), also known as Preuss’s Guenon, is a diurnal primate that lives terrestrially in mountainous forests up to 2500 metres of eastern Nigeria, western Cameroon and Bioko in Equatorial Guinea.

Preuss’s Monkey troops consist of one adult male and several females and adolescents and usually consist of about 17 individuals. Females give birth to a single young about once every three years. Preuss’s Monkeys mature at 4 years and have a life span of 31 years.

Sclater’s Monkey (Cercopithecus sclateri) is an Old World monkey that was first described by Reginald Innes Pocock in 1904 and named after Philip Sclater. It is a diurnal monkey that lives in the trees of the rainforests and tropical areas of Nigeria and Benin.

Sclater’s Monkeys live in troops of 4 to 30 individuals. The male weighs from 3 – 4 kilograms and the female weighs 2.5 – 3.5 kilograms. The female gives birth to one young, which is a factor of decreasing population. Sclater’s Monkey was thought to be extinct until 1988.

Five discrete populations exist, living in Nigeria and are scattered along the Niger River and its delta. Two of these populations live near towns that consider them sacred creatures. The other three populations are heavily hunted. Each of the protected populations consist of about 250 individuals.

Sclater’s Monkey is still considered an endangered species and near extinction due to its decreasing population. Today, its territory is protected and regarded as a holy land, where hunting and logging is restricted. Sclater’s Monkey is one of the species that live in the Guinean Forests of the West Africa bio diversity hotspot.

Males weigh from 3.5 – 4.5 kilograms and females weigh 2 – 4 kilograms. Females give birth to one young, which is a factor of decreasing population. The White-throated Monkey was once considered extinct due to constant hunting for the fur of its unique red belly and white front legs. Yet, a small group was found near the Niger River in 1988.

The White-throated Monkey is still considered an endangered species due to its decreasing numbers. Today, its territory is protected and regarded as a holy land, where hunting and logging is restricted. It is one of the species that live in the Guinean Forests of the West Africa Bio diversity Hotspot.

The Wolf’s Mona Monkey (Cercopithecus wolfi) is an Old World monkey in the Cercopithecidae family. Although it is currently referred to as a full species, it includes three subspecies:

C. w. wolfi which is found on the south Zaire basin between Zaire and Kasai Rivers,

C. w. pyrogaster which is found south of the Kasai Rivers and….

C. w. elegans which is found between the Lomami and Lualaba Rivers.

Wolf Mona Monkeys are not listed as endangered. Very little is known on the ecology of this species, however, what is known is that this species occurs primarily in lowland forest and it also inhabits slope and swamp forests. There is insufficient data regarding their habitat use and preferences, species density and inter specific relationships with other primates – these subjects are still being investigated.