You are here: Home / Animals / The Puma Cat 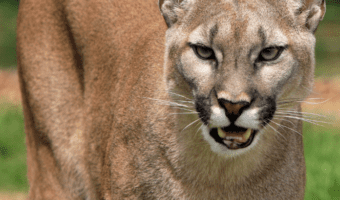 Pumas are solitary cats and have the largest ranges of all wild terrestrial mammals in the Western Hemisphere. Their range extends from Yukon, Canada to the Southern Andes in South America.

Although Pumas are large cats, they are not classed in the ‘big cat’ category. Instead, they are one of the largest cats of the ‘small cat’ category even though some can match the size of a leopard. 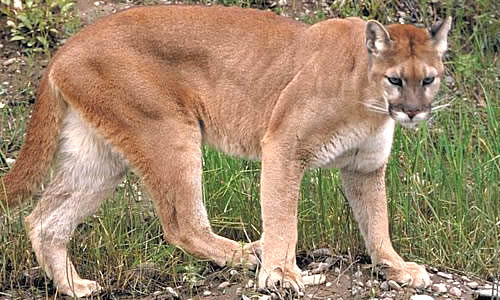 The Puma Cat is the fourth heaviest of the New World cats after the lion, leopard, jaguar and tiger. Adult Pumas are slender and agile cats who measure 2.4 metres (8 feet) in length from nose to tail (tail length is 80 centimetres (33 inches).

Pumas have a plain colored fur ranging from tawny to silver grey or reddish brown. Pumas have lighter patches on their underparts including the jaws, chin and throat. Pumas have round heads and upright ears.

Their front legs are larger than their hind legs and adapted for grasping prey. There are 5 retractable claws on their forepaws plus one dew claw and 4 on the back paws. Pumas have muscular necks and strong jaws. Pumas have acute hearing and excellent vision which makes them formidable hunters.

The Puma has an extensive habitat range. It prefers habitats with dense underbrush and rocky areas for stalking, but it can also live in open plains, coniferous and tropical forests, swamps and deserts.

The Puma is a carnivorous stalker and ambush predator and pursues a wide variety of prey. Their main diet is ungulates such as deer, horses, elk, cattle and sheep. Basically, the puma will eat any animal it can catch, even animals as large as a moose.

Pumas will stalk their prey through bushes and trees and across rock ledges before powerfully leaping onto the back of their victim and delivering a suffocating neck bite. The pumas agile spine is adapted for this killing technique.

When large prey are killed, the puma is known to cover them with bush and return to feed over a period of days. They subsidise their diets with large insects and small rodents.

Puma Cats are territorial animals and territories depend on terrain, vegetation and the abundance of prey. Pumas are reclusive and will avoid areas where there are human settlements. Female territories are usually half the size of male territories which can measure between 58 to 386 square miles.

Females mark their territories using scrape mark, urine and faeces which are also used to attract mates. Males may scrape together a small pile of leaves and grasses and then urinate on it as a way of marking their territory.

Groups of pumas will only contain mothers and their young. Adult pumas only meet for breeding. Pumas are crepuscular and are most active at dawn and dusk.

Pumas are vocal cats and are well known for their low pitched hisses, growls, purrs and screams. As they have the largest hind legs in the cat family, pumas are able to leap very high up to 5.4 metres (18 feet). Horizontal jumps can measure between 6 and 12 metres (20 – 40 feet).

They are very fast cats and can run at speeds of 35 miles per hour, although it is best adapted for short, sharp, powerful sprints. Pumas are good climbers and are capable of swimming.

Female pumas reach sexual maturity between 1 – 3 years. One litter of cubs is born every 2 – 3 years. Females are in estrous for 8 days of a 23 day cycle. After a gestation period of 91 days, a litter of 1 – 6 cubs are born.

Maternal dens are usually caves or other covered areas offering protection for the cubs. Cubs are spotted and born with blue eyes and rings on their tails. Cubs are weaned around 3 months after birth and as they develop they accompany their mother to kill sites.

At 6 months old, cubs hunt for small prey of the own. Female pumas will guard her cubs fiercely and successfully fight off animals as large as Grizzly Bears. Cubs will leave their mother to establish their own territory at around 2 years old. The life span of a puma cat in the wild is between 8 – 13 years and 18 – 19 years in captivity.

Pumas are classed a ‘Near Threatened’ by the IUCN. The total breeding population of pumas is less than 50,000 individuals and continues to decline. Pumas have no particular threats from other animals besides humans, although it interacts with other large predators such as the Brown Bear and Grey Wolf in which it competes for prey.

In some parts it may have to compete with the Jaguar and the American Alligator. When the puma cat and jaguars range overlaps, jaguars will dominate the larger prey and the puma will take the smaller prey.

As of 1996, puma cat hunting was prohibited in Argentina, Brazil, Bolivia, Chile, Colombia, Costa Rica, French Guiana, Guatemala, Honduras, Nicaragua, Panama, Paraguay, Suriname, Venezuela, and Uruguay. Cougars are generally hunted with packs of dogs, until the animal is ‘treed’. When the hunter arrives on the scene, he shoots the cat from the tree at close range.

The Cougar cannot be legally killed in California except under very specific circumstances, such as when an individual is declared a public safety threat.

However statistics from the Department of Fish and Game indicate that cougar killings in California have been on the rise since 1970s with an average of over 112 cats killed per year from 2000 to 2006 compared to 6 per year in the 1970s.

The cougar holds the Guinness record for the animal with the highest number of names. It has over 40 names in English alone.The name 'puma' is derived from usage by the Inca Indians.