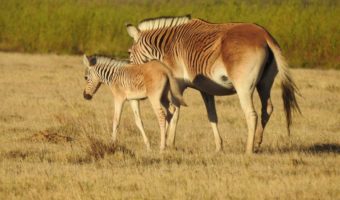 The Quagga zebra is an extinct subspecies of the Plains zebra, which was once found in great numbers in South Africas Cape Province and the southern part of the Orange Free State.

The name comes from a Khoikhoi word (a historical division of the Khoisan ethnic group of southwestern Africa) for zebra and is onomatopoeic, being said to resemble the quaggas call. 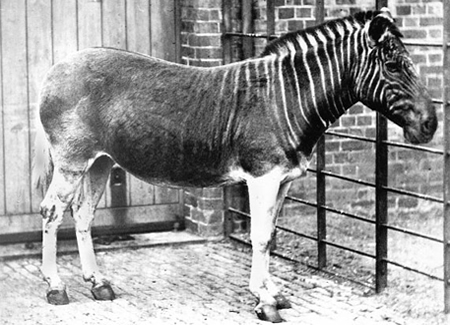 The Quagga zebra was distinguished from other zebras by having the usual vivid stripes on the front part of the body only. In the mid-section, the stripes faded and the dark, inter-stripe spaces became wider and the hindquarters were a plain brown.

The Quagga zebra coat was sandy brown and its legs and tail whitish. Only its head, neck and shoulders were dark-striped. Living in herds and competing with domestic sheep for grass, quaggas were exterminated in the 19th cent. The last died in 1883 in the Amsterdam Zoo.

Because of the great confusion between different zebra species, particularly among the general public, the Quagga had become extinct before it was realised that it appeared to be a separate species. However, the Quagga zebra was the first extinct creature to have its DNA tested and it was subsequently discovered that it was not a separate species but definitely a sub-species of the Plains zebra.

After the very close relationship between the Quagga and surviving zebras was discovered, the Quagga Project was started by Reinhold Rau in South Africa to recreate the quagga by selective breeding from plains zebra stock, with the eventual aim of reintroducing them to the wild. This type of breeding is also called ‘breeding back’.

In early 2006, it was reported that the third and fourth generations of the project have produced animals which look very much like the depictions and preserved specimens of the Quagga, though whether looks alone are enough to declare that this project has produced a true ‘re-creation’ of the original quagga is controversial.

DNA from mounted specimens was successfully extracted in 1984, however, the technology to use recovered DNA for breeding does not yet exist. In addition to skins such as the one held by the Natural History Museum in London, there are 23 known stuffed and mounted Quagga throughout the world. A twenty-fourth specimen was destroyed in Konigsberg, Germany during World War II.