You are here: Home / Animals / Raccoon 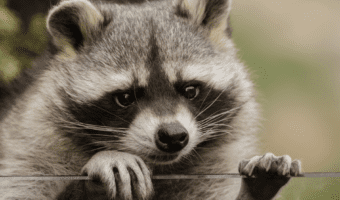 The Raccoon (Procyon lotor) is a member of the procyonidae family, a family of smallish animals, with generally slender bodies and long tails.

Except for the kinkajou, all procyonids have banded tails and distinct facial markings. The raccoon is a medium sized mammal native to the boreal forests of North America.

The word ‘raccoon’ is sometimes spelt ‘racoon’. During the mid 20th century, raccoons were introduced and are now widespread across the european mainland. 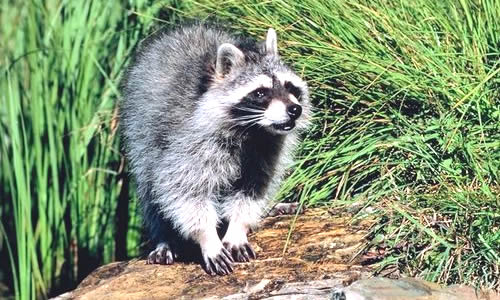 Raccoons have a very distinctive facial mask whereby they have an area of black fur around the eyes which contrasts with the surrounding white face coloring. This is sometimes know as a ‘bandits mask’. Their ears are slightly rounded and are also bordered with white fur. On other parts of their body the long and stiff guard hairs, which shed moisture, are usually greyish in color. Raccoons have a dense underfur, which accounts for almost 90% of their coat and insulates them against cold weather. Their tails have alternating light and dark rings.

Raccoons have plantigrade feet (heel and sole touch the floor) and are able to sit on their hind legs to examine objects with their front paws. Both their forepaws and hind feet have five toes. Raccoons cannot run fast or jump very far as they only have short legs, however, raccoons can swim at around 4 miles per hour and are able to remain in water for several hours.

Raccoons have extremely sensitive front paws. The hyper sensitive front paws with five freestanding fingers are surrounded by a thin layer of callus for protection. With their vibrissae positioned above their sharp, not retractable claws, they are able to identify objects before even touching them. It is quite amazing that standing in cold water below 10 degrees centigrade has no effect on these sensitive parts.

Raccoons are thought to be color blind, however, their eyes are well adapted at sensing green light. Raccoons have acute hearing and can perceive high tones up to 50 – 85 kHz as well as very quiet noises like those produced by earthworms underground.

Shape and size of home ranges vary depending on gender and habitat, with adults claiming areas more than twice as large as juveniles. Tree hollows of old oaks or other trees and rock crevices are preferred by raccoons for sleeping, winter and litter dens. If such dens are unavailable raccoons utilize burrows dug by other mammals, dense undergrowth or tree crotches. Raccoons never make dens more than 1,200 feet from a permanent water source.

Though usually nocturnal, raccoons are sometimes active at daylight to take advantage of available food sources. Raccoons are omnivores and feed up on plant foods and vertebrates. Their diet in spring and early summer consists mostly of insects, worms and other animals already available early in the year, raccoons prefer fruits and nuts that emerge in late summer and autumn for their rich calorie content in order to build up fat storage for winter. Fish and amphibians are their main vertebrate prey animals. 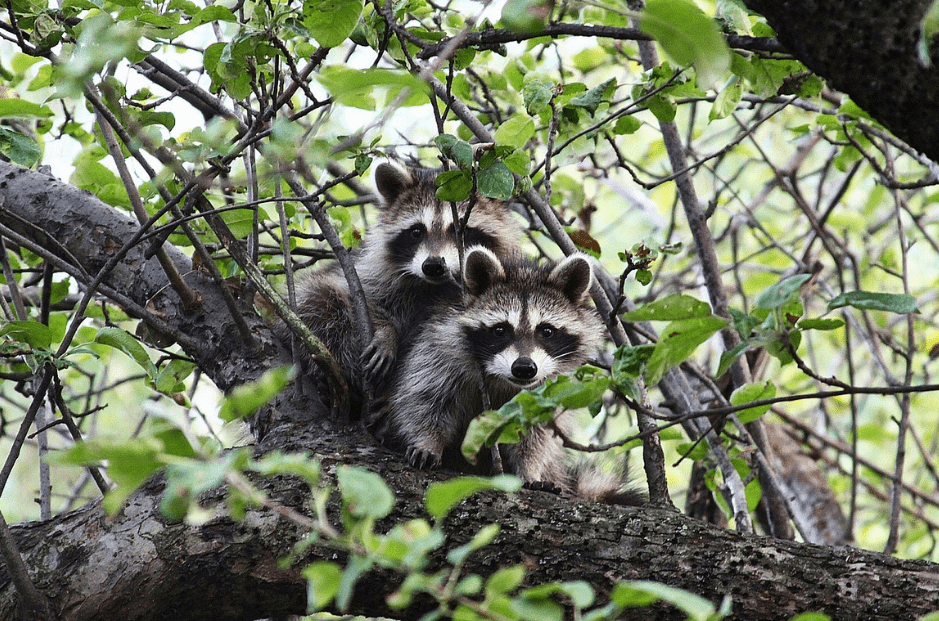 Raccoons have 13 identified vocal calls of which 7 are used in communication between mother and kits (young) one of these being a bird-like twittering.

Raccoons are mischievous animals, however, they are quite intelligent as well. A study showed results that raccoons were able to open 11 of 13 complex locks in less than 10 tries and had no problems subsequently when the locks were rearranged or turned upside down. Raccoon also have very good memories.

Raccoon breeding season occurs in spring between late January and mid march. After a gestation period of around 65 days, female raccoons give birth to 2 – 5 young (kits). Kits measure 9.5 centimetres (3.7 inches) long and weigh between 60 and 75 grams (2.1 – 2.6 ounces) at birth. The baby raccoon kits are blind and deaf at birth, though their mask already stands out on their light fur.

Young raccoons are raised by their mothers until they disperse from the group in the autumn. Since some males show aggressive behaviour towards unrelated kits, mothers will isolate themselves from other raccoons until their kits are big enough to defend themselves. The life span of a raccoon in the wild is 1 – 3 years, however, both wild and captive raccoons have been known to live up to 16 years.

Road accidents are a common cause of death to raccoons. Predation by bobcats, coyotes and other predators is not a significant cause of death, especially because larger predators have been exterminated in many areas inhabited by raccoons.

Raccoons are classed as ‘Not Threatened’.

Female raccoons will over-eat when nursing.The heaviest raccoon recorded was 62 pounds.The raccoon is one of the primary rabies carriers.Raccoons can easily unlock doors.