You are here: Home / Animals / Ratel 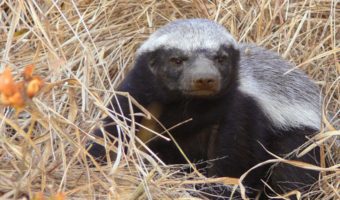 The Ratel (Mellivora capensis), also known as the ‘Honey Badger’ is a fierce badger-like mammal found in Africa and also found in India.

The Ratels alternative name derives from the fact that it has a fondness for honey.

Ratels are very fearless animals and have been entered into the Guinness Book of Records for this reason. There ferocity has made them one of the successful mammals in the animal world almost equalling a lion with its courage. A male ratel is called a Boar and a female is called a Sow. 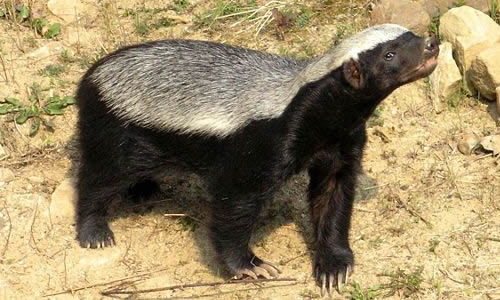 Ratels have a thick skull inside their broad heads, small eyes and no external ears. Their ears are enclosed in the skin, with an opening that can be closed to keep out dirt when the ratel is digging. They have a blunt snout and strong limbs equipped with long sharp claws which can measure 350 – 400 millimetres in length and are used for digging. Their short legs have great endurance and they are able to chase large animals for long periods of time until the pursued become exhausted.

Ratels can be found on arid grasslands, moist savannas, montane forests and semi-deserts. They are adapted to surviving in both wet and dry habitats.

Ratels are omnivores but have also been described as fierce carnivores. They are very good hunters, scavengers and forages. Their diet contains a wide variety of foods including fish, birds, reptiles – particularly snakes, invertebrates, insects, fruit and carrion. However, the ratels favourite food is honey. Ratels have been known to chase young lions away from their kills and steal their food.

Ratels are nomadic creatures who are usually solitary or in small family groups. They range over massive areas with an adult ratels range being as large as 600 square kilometres. Ratels who live near human populations lead a completely nocturnal lifestyle, however, those in uninhabited regions are mainly diurnal.

Ratels work in close partnership with a small bird called a Honey Guide.

Honey Guides are very good at finding bees nests and ratels have a healthy appetite for bees nests. When the Honey Guide discovers a nest, which is usually in hollow trees or among rocks, it sings out loudly to inform the ratel. The bees nest consists of wax honeycombs which are full of honey and also bee grubs. Bee grubs develop from egg to pre-pupa before they diapause and hatch as adult bees.

The ratel follows the bird to the nest where it then uses its strong claws to push away rocks or rips open tree trunks to reach the bees nest. The ratel then gets the honey and the Honey Guide gets the bee grubs and some of the honeycombs.

There are risks in this behaviour whereby the ratel can sometimes be stung to death by the angry bees. However, ratels give off an awful smell which almost puts the bees to sleep so that they find it difficult to sting. The ratels thick coat also gives it plenty of protection against the stinging bees.

Ratels often flush out small rodents by digging into their burrows when in need of a small meal. Ratels are very rarely preyed upon by other animals because of their ferocious nature and their thick, loose skin makes it difficult for a predator to grasp them. As well as being aggressive animals, ratels are actually very intelligent and have been observed using objects as tools to aid their hunting. The ratel has been seen rolling a log and positioning it to stand on in order to reach a Kingfisher bird which was obviously a potential meal.

Male and female ratels mate for 3 – 4 days inside a burrow. After a gestation period of 6 months, the female gives birth to 1 – 4 cubs in a chamber or burrow lined with grass. The cubs look very much like their mother at birth and as they develop, they will learn how to be aggressive to other animals as they roam around the savannas and semi-deserts.

The ratel cubs rely on their mother for food and shelter and as they travel, she will dig new burrows for the cubs to hide. Unfortunately, taking the cubs on hunts can hinder the adult ratels hunting and are therefore left in the burrow alone. This makes them vulnerable to predators and they can even be eaten by other ratels. Because of this, only 50% of ratel cubs will survive. Those who do survive go on to develop and learn hunting skills, how to climb trees and capture prey from its mother as cubs are not born with these essential survival skills.

The lifespan of a ratel is 25 years in the wild.

Ratels are classed as a ‘Vulnerable’ species. Because of the ratels low birth rate, they are very vulnerable to hunting and habitat destruction. They are also persecuted by bee hive farmers who believe they are a threat to their livelihood and many are killed or even stung to death after becoming caught in hive traps.