You are here: Home / Animals / Red Back Jumping Spiders 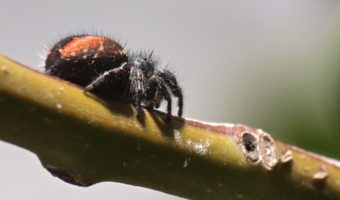 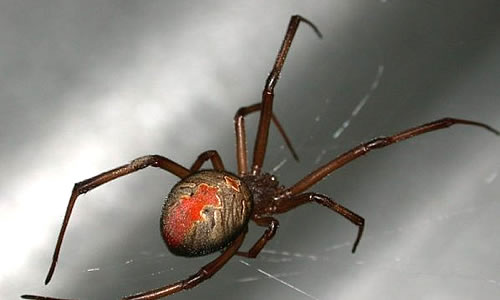 The Redback Spider is easily recognisable by its black body with a prominent red hourglass shape on its abdomen. Females measure about one centimetre in length and have long slender legs, while the male is smaller being only 3 to 4 millimetres in length. Male markings are less distinct with the hourglass marking being more pale than the females. Juveniles have additional white markings on the abdomen.

Redback spider webs consist of a tangled, funnel-like upper retreat area from which vertical, sticky catching threads run to ground attachments. The Redback Spider favours proximity to human habitation, with webs being built in dry, sheltered sites, such as among rocks, in logs, shrubs, junk-piles, sheds, or toilets. Redback Spiders are less common in winter months. Daddy-long-legs Spiders and White-tailed Spiders are known to catch and kill Redback Spiders.

Redback spiders usually prey on insects, however, they are capable of capturing quite large animals, such as male Trapdoor spiders, king crickets and small lizards, if they become entangled in their web. Prey-stealing is also common, with large females taking stored food items from other spiders webs.

The Redback spider is one of only two animals where the male has been found to actively assist the female in sexual cannibalism. In the process of mating, the much smaller male somersaults to place his abdomen over the females mouthparts. In about 2 out of 3 cases, the female consumes the male while mating continues. Males who are not eaten die soon after mating.

Once the female has mated, she can store sperm and use it over a period of up to 2 years to lay several batches of eggs. A female Spider may lay eggs every 25 to 30 days. A single female spider normally lays between 40 and 300 eggs in each sac, however, she can lay up to 5000 eggs. The eggs hatch 13 to 15 days after being laid. Young Redback Spiders leave the maternal web by being carried on the wind. The spider extends its abdomen high in the air and produces a droplet of silk. The liquid silk is drawn out into a long thread that, when long enough, carries the spider away. Eventually the silken thread will adhere to an object where the young spider will establish its own web.

Redback spiders, along with Australasian funnel-web spiders (a category of spider which includes the notorious Atrax robustus, or Sydney funnel-web spider), are the most dangerous spiders in Australia. The redback spider has a neurotoxic venom which is toxic to humans with bites causing severe pain. Redback bites occur frequently, particularly over the summer months.

More than 250 cases receive antivenom each year, with several milder envenoms probably going unreported. Only the female bite is dangerous. Redback spiders can cause serious illness and have caused deaths. However, since Redback Spiders rarely leave their webs, humans are not likely to be bitten unless a body part such as a hand is put directly into the web and because of their small jaws many bites are ineffective. The venom acts directly on the nerves, resulting in release and subsequent depletion of neurotransmitters.

Children, the elderly or those with serious medical conditions are at much higher risk of severe side-effects and death resulting from a bite.

Common early symptoms of a Redback spider bite are pain (which can become severe), sweating (always including local sweating at bite site), muscular weakness, nausea and vomiting. Antivenom is available. No deaths have occurred since its introduction.

The larger female spider is responsible for almost all cases of Redback spider bites in humans, the smaller male spider was thought to be unable to envenom a human. However, male bites have occurred; the rarity of bites is probably due to his smaller size and its proportionally smaller fangs, rather than the male being incapable of biting or lacking venom of similar potency of the female. Cases have shown that the male bite usually only produces short-lived, mild pain.