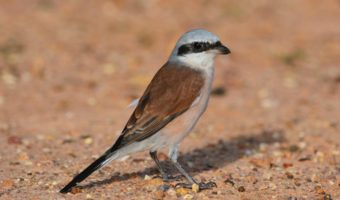 The Red-backed Shrike bird (Lanius collurio) is a member of the shrike family Laniidae. The general color of the males upper parts is reddish. It has a grey head and a typical shrike black stripe through the eye. Underparts are tinged pink and the tail has a black and white pattern similar to that of a wheatear. In the female and young Red-backed Shrikes, the upperparts are brown and vermiculated (wavy lines or markings ). Underparts are buff and also vermiculated.

This 16 – 18 centimetres long migratory passerine eats large insects, small birds, voles and lizards. Like other shrikes the Red-backed Shrike hunts from prominent perches and impales corpses on thorns or barbed wire as a ‘larder’.

The Red-backed Shrike breeds in most of Europe and western Asia and winters in tropical Africa.

The Red-backed Shrikes range is decreasing and it is now probably extinct in Great Britain as a breeding bird, although it is frequent on migration.

The Red-backed Shrike breeds in open cultivated country with hawthorn and dog rose.