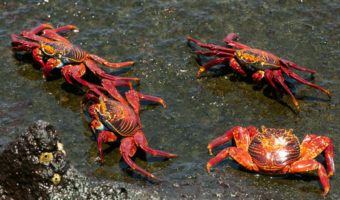 The Red Rock crab (Grapsus grapsus) also known as the Sally Lightfoot crab is one of the most common crabs along the north-east Pacific coastal waters.

The Red Rock crab can also be seen along the entire coast of Central America and Mexico and nearby islands.

The Red Rock crab is one of the many charismatic species that inhabits the Galapagos Islands, and is often seen in photos of the archipelago, sometimes sharing the seaside rocks with the Marine Iguanas.

The Red Rock crab is a typically-shaped crab, with five pairs of legs, the front two bearing small, blocky claws. The other legs are broad and flat, with only the tips touching the ground. The crabs round, flat shell is just over 8 centimetres (3 inches) in length.

Young Red Rock crabs are black or dark brown in color and camouflage well on the black lava coasts of volcanic islands. Adult Red Rock crabs are quite variable in color. Some are muted brownish-red, some mottled or spotted brown, pink, or yellow. The ones seen on photographs of tropical island fauna are often bright orange or red with stripes or spots dorsally, blue and green ventrally, and sporting red claws and pink or blue eyes.

The Red Rock crab mates between July and August. Like many crabs, mating occurs when the female comes into molt. The male guards her while she casts off her old carapace and waits for the new exoskeleton to harden.

Sperm is passed in packages to her abdominal flap where it remains until the eggs are fertilized. The eggs are scattered on the substrate and hatch into tiny larvae around four months later. The planktonic larvae develop through different life stages in the water column.