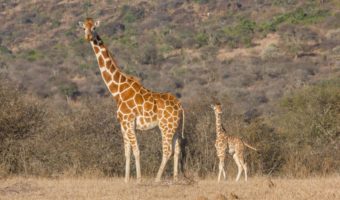 The Reticulated Giraffe or Somali Giraffe (Giraffa camelopardalis reticulata), is a subspecies of giraffe native to Somalia, however, it is also widely found in Northern Kenya. Reticulated giraffes can interbreed with other giraffe subspecies in captivity or if populations are low in the wild.

The Reticulated giraffe is the most well-known of the nine giraffe subspecies and is by far the giraffe most commonly seen in zoos. 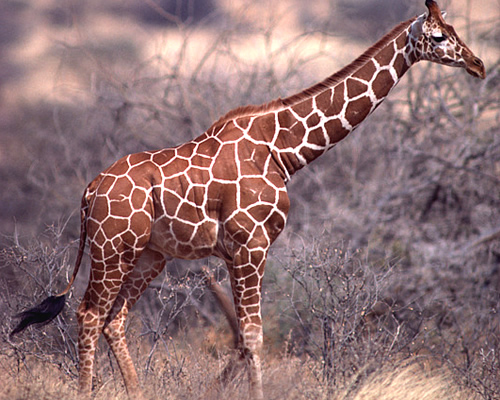 The Reticulated Giraffes coat consists of large, polygonal liver-colored spots outlined by a network of bright white lines. The blocks may sometimes appear deep red and may also cover the legs.

Even though the Reticulated Giraffes neck is taller than most humans are, it is still made of only 7 bones. This is the same number of bones that are in the human neck. On the top of their heads, Reticulated Giraffes have horns made of solid bone and covered with skin. These are used for sparring between males.

Reticulated Giraffes are also fast and are able to gallop up to 56 kilometres per hour (35 miles per hour). Mothers aggressively defend their calves, kicking out with their feet at the approach of lions or hyenas.

The Reticulated Giraffe gets a large amount of water from the dew on the leaves and from the water in the leaves. When it encounters a watering hole, it will drink up to 12 gallons at one time.

A Giraffes gestation period lasts between 14 and 15 months, after which a single calf is born. The mother gives birth standing up and the embryonic sack usually bursts when the baby falls to the ground. Newborn giraffes are about 1.8 metres (6 feet) tall. Calves are able to run around after only a few hours although for the first 2 weeks of their lives, they generally lie down with their mother guarding them as they can easily become prey to lions, hyenas and leopards. Only between 25 – 50% of calves reach adulthood. If calves do survive, they can have a life span of up to 25 years.

The Reticulated or Somali Giraffe (G.c. reticulata) is one of nine subspecies in the giraffe family, which includes: