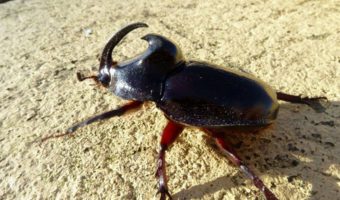 The Rhinoceros Beetle (or Rhino Beetle) belongs to the subfamily (Dynastinae) and is part of the family of scarab beetles (Scarabaeidae).

Rhino Beetles reach 60 millimetres in length. They have two horns, one on the top of the head and the other projecting forward from the middle of the thorax. Each horn is slightly forked at the end. The two horns almost meet and by moving its head the beetle can pinch weakly with them.

The male Rhinoceros Beetles use their horns in mating battles against other males. Scientists believe that the beetle has become so strong to be able to forage through heavy litter on the jungle floor and dig its way to safety. Using its horns, it can dig its way out of a sticky situation by burying itself underground, escaping danger.

The best protection they have from predators is their usually large size combined with being nocturnal (activity being at night). During the day, they hide under logs or in vegetation and are invisible from the few predators big enough to want to eat them. The fearsome appearance of these beetles is increased by the loud hissing squeaks they give when disturbed. The hissing squeak is merely a bluff and is produced by rubbing the abdomen against the ends of the wing covers. If a squeaking beetle is examined closely, the abdomen can be seen moving in time with the squeaks.

Their larval stage is long, several years in some species. As with all beetles, the Rhinoceros Beetle larvae (grubs) hatch from eggs and develop into pupae and these eventually develop into adult beetles. Each female lays about 50 white eggs. Adults feed on nectar, plant sap and fruit. In spite of their size, they do not eat very much. The larvae, on the other hand, eat a great deal of rotting wood or the compost in which they live. Rhino beetles have three instars, that is, they go through three molts before changing into the pupae stage. It is not possible to say what the average life span is because the name rhino beetle refers to about 300 different species of scarab beetles, some live in tropical countries and some live in North America and so the length of their lives varies a lot.

In spite of their fierce appearance, they are all totally harmless. They cannot bite or sting or hurt you with their horns. The horn of the male is not used for protection but rather for the occasional battle with another male over a feeding site. The victorious male with the feeding site can then often attract a mate. Female Rhino Beetles have no horns. The females are quite plain and less frequently seen.

Rhinoceros beetles are the strongest animals on the planet, proportionally. They can lift up to 850 times their own weight. To put this into perspective, if a human of average height and weight had the strength of the rhinoceros beetle, it would be able to lift a 65 ton object. You would also think something as massive as an elephant would be able to carry more weight than a little insect. However, A huge African elephant can only carry up to 25% of its own weight on its back and as the Rhino Beetle can carry 850 times their own weight, there is no contest. That would be like an elephant carrying 850 elephants on its back.

Rhinoceros Beetles can fly strongly and are attracted to lights at night. They are generally noticed when they come to house lights or when they are seen lying beneath street lights and on the concrete tarmacs of petrol stations. In Brisbane they are only seen in the summer months, but in the tropical north they can be found at anytime of the year.

Rhinoceros beetles are popular childrens pets in Asia. They are clean, easy to maintain and safe to handle. In Asian countries, male beetles are also used for gambling fights since they naturally compete for female beetles with the winner knocking the other off a log.