Right Whales are baleen whales belonging to the family ‘Balaenidae’. Three right whale species are recognized in the genus ‘Eubalaena’, while the Bowhead Whale, also a Right whale, is placed in its own genus, ‘Balaena’.

Right Whales can grow up to 18 metres (60 feet) long and weigh up to 100 tons. Their robust bodies are mostly black, with distinctive white callosities (skin abrasions) on their heads. They are called ‘Right Whales’ because whalers thought the whales were the ‘right’ ones to hunt, as they float when killed and often swim within sight of the shore.

Populations were vastly reduced by intensive harvesting during the active years of the whaling industry. Today, instead of hunting them, people often watch these acrobatic whales for pleasure.

about 7,500 Southern Right Whales (Eubalaena australis) are spread throughout the southern part of the Southern Hemisphere.

8,000 – 9,200 Bowhead Whales (Balaena mysticetus) (also Right Whales but in a different Genus) are distributed entirely in the Arctic Ocean.

Right Whales are easily distinguished from other whales by the large number of callosities on their heads, a thick back without a dorsal fin and a long drooping mouth that begins high above the eye and then arches round beneath it. The body of the Right Whale is very dark grey or black with some white patches on the belly. 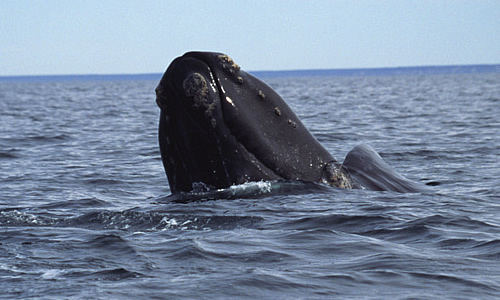 The white patches on the whales skin around the callosites are not due to skin pigmentation, but are actually large colonies of whale lice buried in the whales skin. Adults Right Whales can measure between 11 – 18 metres (36 – 59 feet) in length and typically weigh 60 – 80 tons. The most typical lengths are 13 – 16 metres (42 – 52 feet). The body is extremely robust with girth as much as 60% of total body length in some cases. Their tail fluke is also broad (up to 40% of body length).

The North Pacific species of Right Whale is on average the largest of the three Eubalaena right whales. The largest specimens of these may weigh 100 tons.

Right Whales have between 200 and 300 baleen plates on each side of the mouth. These are narrow and approximately 2 metres long and are covered in very thin hairs. The plates enable the whale to feed. The testicles of the Right Whale are likely to be the largest of any animal, each weighing around 500 kilograms (1,100 pounds). At 1% of the whales total body weight, this size is very large even taking into account the size of the whale. This suggests that sperm competition is important in the mating process.

Right Whales have a distinctive wide V-shaped blow, caused by the widely-spaced blowholes on the top of the head. The blow rises to 5 metres (16 feet) above the oceans surface.

Female Right Whales reach sexual maturity at 6 – 12 years and breed every 3 – 5 years. Both reproduction and calving take place during the winter months. Calves are approximately 1 tonne (1.1 short tons) in weight and 4 – 6 metres in length at birth following a gestation period of 1 year. The Right Whale grows rapidly in its first year, typically doubling in length. Weaning occurs after 8 months to 1 year and the growth rate in later years is not well understood, it may be highly dependent on whether a calf stays with its mother for a second year.

Very little is known about the life span of Right Whales. One of the few pieces of evidence is the case of a mother Atlantic Northern Right Whale that was photographed with a baby in 1935, then photographed again in 1959, 1980, 1985 and 1992, callosity patterns were used to ensure that it was the same animal. Finally, she was photographed in 1995 with a seemingly fatal head wound that is presumed to have been caused by her being struck by a ship. The animal was around 70 years of age at death. Research on Bowhead Whales suggest reaching this age is not uncommon and may even be exceeded.

Right Whales are slow swimmers, reaching only 5 knots (9 kilometres per hour) at top speed, however, they are highly acrobatic and frequently breach (jump clear of the sea surface), tail-slap and lobtail. Like other baleen whales, Right Whales are not gregarious and the typical group size is only two. Larger groups of up to twelve have been reported, however, these were not close-knit and may have been together only for a short time.

The Right Whales only predators are the killer whale and to some degree, humans. When danger is sensed, a group of Right Whales may come together in a circle, with their tails pointing outwards, to deter a predator. This defence is not always successful and calves are occasionally separated from their mother and killed.

The Right Whales diet consists primarily of zooplankton and tiny crustaceans such as copepods, as well as krill and pteropods, although they are occasionally opportunistic feeders. Right Whales feed by ‘skimming’ along with their mouth open. Water and prey enters the mouth but only the water can pass through the baleen and out again into the open sea. Therefore, for a Right Whale to feed, the prey must occur in sufficient numbers to generate the whales interest, be large enough that the baleen plates can filter it and be small enough so that it does not have the speed to escape. The ‘skimming’ may take place on the surface, underwater or even close to the oceans bottom, indicated by mud occasionally observed on Right Whales bodies.

Vocalizations made by Right Whales are not elaborate compared to those made by other whale species. The whales make groans, pops and belches that are typically around 500 Hertz. The purpose of the sounds is not known, however, it is likely to be a form of communication between whales within the same group.

Conservation Status of the Right Whale

The leading cause of death among Atlantic Northern Right Whales, which migrate through some of the worlds busiest shipping lanes whilst journeying off the east coast of the United States, is injury sustained from colliding with ships. At least 16 reported deaths due to ship strikes were reported between 1970 and 1999 and probably many more remain unreported.

Both the North Atlantic Right Whale and North Pacific Right Whale species are listed as ‘endangered’ by CITES and the IUCN, and under the U.S. Endangered Species Act.

A second major cause of death in North Atlantic Right Whales is entanglement in fishing equipment. Right Whales filter feed plankton with their mouths wide open, exposing themselves to the risk of entanglement in any rope or net fixed in the water column. Right Whales commonly wrap rope around their upper jaws, flippers and tails. Most manage to escape with minor scarring, however, some get seriously and persistently entangled. Such cases if sighted are sometimes sucessfully disentangled, however, others are not and they die a most gruesome death over a period of months. There has been a major focus on the conservation status of the right whale in terms of an endangered species. However equally significant is the extreme animal welfare concern such chronic fatal entanglements represent.

The Southern Right Whale, listed as ‘endangered’ by CITES and ‘lower risk – conservation dependent’ by the IUCN, is protected in the jurisdictional waters of all countries with known breeding populations (Argentina, Australia, Brazil, Chile, New Zealand, South Africa and Uruguay). In Brazil, a federal Environmental Protection Area encompassing some 1,560 kilometres squared (602 square miles) and 130 kilometres (80 miles) of coastline in Santa Catarina State was established in 2000 to protect the species main breeding grounds in Brazil and promote regulated whale watching.

On June 26, 2006, NOAA (National Oceanic and Atmospheric Administration) proposed the Strategy to Reduce Ship Strikes to North Atlantic Right Whales. The proposal, which is opposed by the shipping industry, envisages imposing a speed cap of 10 knots (11.5 miles per hour; 18.5 kilometres per hour) on specific routes during calving season for vessels 20 metres (65 feet) or longer. The proposal is open for comments until August 25, 2006. According to the NOAA (National Oceanic and Atmospheric Administration), 25 of the 71 Right Whale deaths reported since 1970 resulted from ship strikes.