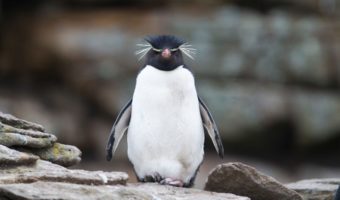 Rockhopper Penguins breed in colonies, from sea-level to cliff-tops and sometimes inland. The major colonies on the Falkland Islands are estimated to have over 3 million breeding pairs.

The scientific name for the Southern Rockhopper Penguin is (Eudyptes chrysocome). 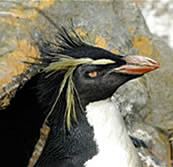 The Rockhopper penguin is the smallest yellow-crested, black-and-white penguin, reaching a length of 55 centimetres and weighing 5 to 8 pounds. Rockhopper Penguins have distinctive crest feathers on their heads, bright orange-red beaks and tiny blood red eyes. Male and female Rockhopper Penguins are very similar in appearance, though males are larger.

The Rockhopper penguins are distinguished from the Macaroni penguin and other members of the crested species by their smaller size and the thin, vivid yellow tassels which extend along the sides of the brow but do not meet between the eyes.

The top of the head has spiked black feathers. Like all penguins, Rockhopper Penguins have a big head, a short, thick neck, a streamlined shape, a short, wedge-shaped tail and strong, stiff, flipper-like wings. For camouflage from predators, their under parts are mostly white, while the upper parts are blue-black. The Rockhopper Penguin has slate-grey upper parts and a straight, bright yellow eyebrow ending in long yellowish plumes projecting sideways behind a red eye.

Rockhopper Penguin colonies are often relatively small compared with other penguin species but what they lack in size they make up for in noise. Fierce competition for nesting materials, mating partners and territory all contribute to the cacophony of sound at these sites. As well as vocalizing, these birds communicate by head shaking, head and flipper waving, bowing, gesturing and preening.

Rockhopper Penguins make their nests by scraping a hole in the ground and lining it with dried grasses. Two eggs are usually laid. Often only one chick is survives. The first egg is smaller and often gets eaten by predators. The second egg is larger and the chick that hatches from this egg has a better chance of surviving.

The male and female Rockhopper Penguin guard the eggs and keep them warm for 32 to 34 days. They take turns with each taking care of the eggs for 10 days at a time. When the chick is hatched the male broods and cares for the chick while the female fishes and brings home food. When the chick is about 4 weeks old they huddle with other chicks. These large groups are called ‘crèches’. The chicks do this for warmth and protection. The chicks molt and leave for the open sea when they are 65 to 72 days old. Rockhopper Penguins have an average life span of 10 years.

At sea, Rockhopper penguins are eaten by blue sharks, leopard seals and fur seals. On land, eggs and chicks are eaten by many birds, including skuas, petrels and Kelp gulls.

The status of the Rockhopper penguin is vulnerable due to a fall of 24% in its population in the last thirty years.