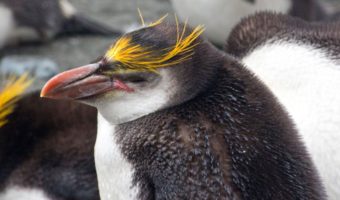 The royal penguin (Eudyptes schlegeli) is a penguin species that inhabits the waters surrounding Antarctica. They belong to the genus Eudyptes and the family Spheniscidae. Royal penguins look very much like Macaroni Penguins, but have a white face and chin instead of the macaronis’ black visage. They got their name thanks to the head feathers that make them look very majestic.

Royal penguins are found in the southern hemisphere near the Macquarie and Campbell Islands to the south of New Zealand.

There is some controversy over whether they are a sub-species of macaroni penguins as both have black and yellow crests on their head. The royal penguin is the tallest crested penguin and belongs to the order Sphenisciformes.

The International Union for Conservation of Nature (IUCN) classifies the royal penguin as near threatened. Despite this, there an estimated 1,700,000 royal penguins on earth currently. 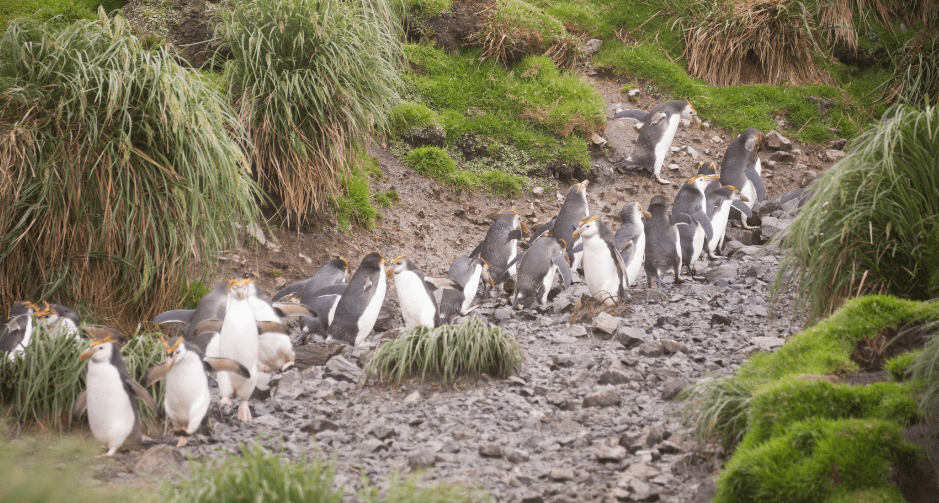 Royal penguins look very similar to macaroni penguins and are often confused with them. They range from 65 to 75 centimeters in height, making them the largest of the crested penguins. Males are slightly larger, averaging 73 cm high and weighing 6 kg. Females average 69 cm and weigh 5 kg.

They have black sides and a black crown, and a white patch present on their rump. Their front side is white. During the non-breeding season, the dorsal (side) feathers of the royal penguins turn dull in color, but, once the mating season arrives and they breed, they molt, and then, new feathers appear of the color dark blue or black. They have a white face and a white throat that merges with the ventral portions.

Royal penguins have bring pink feet with some black on the soles and heel, as well as dark brown claws. Their wingspan ranges from 176 mm to 203 mm. Their flippers vary in length with males averaging 189.6 millimeters and females averaging 185.1 millimeters.

These penguins have large red-brown bills and an orange-yellow eyebrow that is continuous across the forehead with projecting crest feathers. Their crest is one of the main features that gets them confused with macaroni penguins.

Royal penguins have excellent eyesight, particularly while swimming and foraging for prey. The corneas of royal penguin eyes are flat. This allows them to better focus light while underwater and have a greater depth perception. These penguins can see violet, blue and green, but not red.

The royal penguin has an average lifespan of between 15 and 20 years. Many penguins do not live past the first few years of life, as younger penguins lack the physical endurance to tolerate environmental conditions and threats. Unfortunately, royal penguins often die from plastic ingestion, parasitic disease, or predation.

Royal penguins are carnivores and eat crustaceans (mostly krill), small fish and squid caught by pursuit-diving normally at depths of 50 to 150 feet. If necessary, they can dive up to 226 meters for food. Crustaceans make up about 51% of daily intake, with the remaining 49% made up of fish and squid.

Dives rarely exceed two minutes in duration. Like all penguins, they are excellent swimmers, using their webbed feet, powerful flippers and streamlined bodies to ‘fly’ through the water at speeds approaching 20 miles per hour. Royal penguins will travel a range from 68 km to 600 km for foraging. They use chemical communication to smell prey under water while foraging.

Royal penguins are social animals and, like most sea birds, they form long-lasting bonds and nest in large colonies. Despite living socially, they are very territorial of their individual nesting areas.

These penguins are thought to be migratory, but very little is known about their migration or migratory patterns.

When a predator is in closer proximity, the penguins will move their head and flippers in order to intimidate before attacking. The only situation in which royal penguins will not retaliate against attack is when females are incubating the egg. Females that are attacked during this time will lean down and cower, withstanding the pecking against their dorsal side to protect the egg.

Royal penguins also attack others close by as a form of entertainment. They will attack with open beaks, which will turn into a tug-of-war when the beaks interlock. To avoid confrontation, they will walk swiftly with their body upright, head bowed, and flippers held forward. 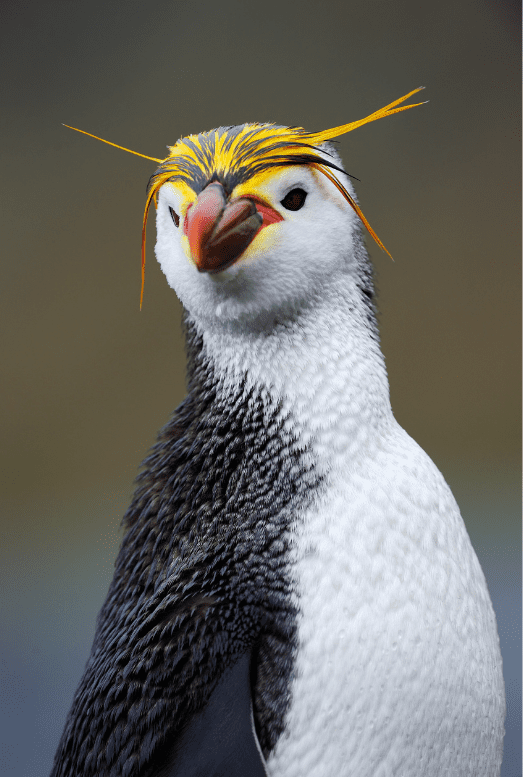 Male royal penguins will return to Macquarie Island for the breeding season in early October. Females arrive on the island about 10 days later to find their mate. Those 10 days allow females additional time for building up their fat reserves to have energy for mating. These penguins are a monogamous species, returning to the same mate year after year during the breeding season.

If a penguin needs to find a new mate, males will try to attract females by swinging their heads up and down while calling out in hopes that a female will choose them as their mate. When reuniting with an established mate at the start of the season, royal penguins will turn their heads and lean into each other to touch and show acceptance.

Royal penguins usually reach sexual maturity and breed for the first time at the age of five. Intruders are kept at pecking range and waving of wings is an indication to the intruder they are too close. Their nests consist of shallow depressions in the sand or grass and are lined with stones and grass. They are defensive of their nesting area of approximately 2m^2 around their nest.

Two eggs are commonly laid but the first egg is often smaller and discarded. Usually only one chick is reared. Incubation lasts for 35 days and is done in 12 day shifts by both parents. Once hatched, the male guards the chick for 10 – 20 days whilst the female feeds the chick daily. After this, the baby penguins form nursery groups with other chicks called ‘crèches’ where they huddle together for warmth and protection. Here they are fed every 2 – 3 days. At 65 days the juvenile is ready to go to sea, by which time their adult feathers have grown in.

Juvenile royal penguins closely resemble adults with a few exceptions. The crest feathers don’t develop fully until adulthood. Juveniles also have smaller, darker bills that are more brownish, matching their dorsal feathers. They lack the white rump patch of adults. The white patch and change of feather color occurs with the first molt as well as yearly growth. Yearling royal penguins have a mat of yellow feathers in place of a crest. The crest fully grows in and royal penguins achieve adult stature and coloration after the third annual molt.

It is unclear whether this penguin is a migratory species, as it is unknown where royal penguins reside during the non-breeding season (mid-April to Mid-September).

During the breeding season, they will nest on Macquarie Island, up to 1.6 kilometers from the shore. The island has many rocky formations with shrub vegetation, providing nesting grounds of unvegetated, level, rocky, or sandy ground surrounded by rocks. Royal penguins nesting on hills or sloped cliffs (up to 200 meters in elevation) use rocks to build their nests and those who nest on the beach use sand. Nests are built near streams that are both a freshwater source and a route to and from the ocean. 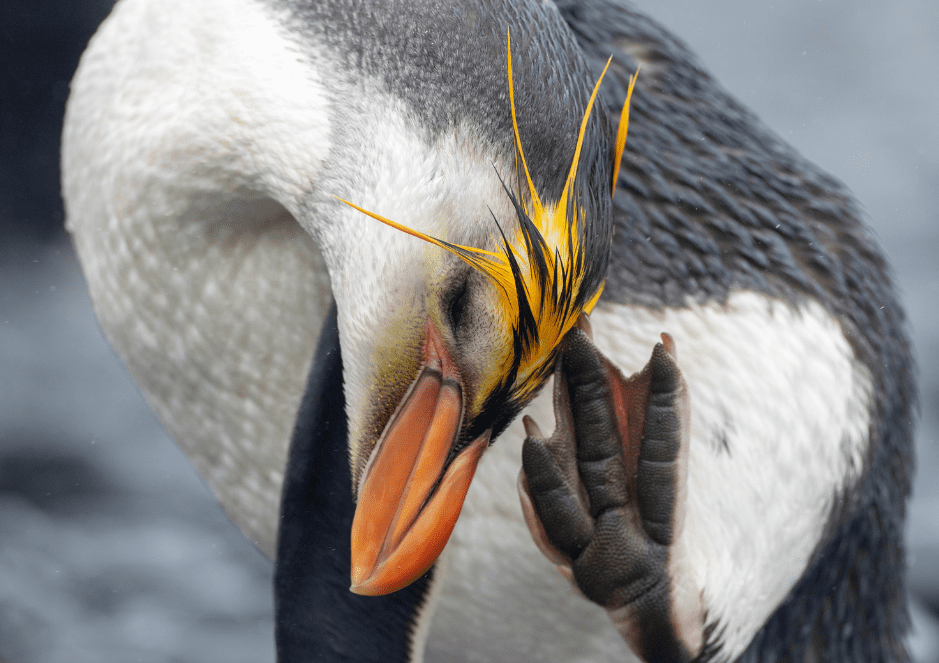 Royal penguins are listed as Near Threatened on the IUCN Red List. The population used to be over 3 million, but have been hunted for their oil in the past. Nowadays, the royal penguin population remains steady at around 1.7 million individuals, which is around 850,000 pairs.

There are many conservation efforts to help increase the current population of royal penguins. Many of these efforts have involved the eradication of predators such as feral cats, black rats, and European rabbits on Macquarie Island. Management of human interaction also has played a role, to prevent climate change, habitat degradation, pollution, and disease from harming these penguins.

Unfortunately, they are only found on one island group, so a natural or human disaster could greatly reduce their numbers.