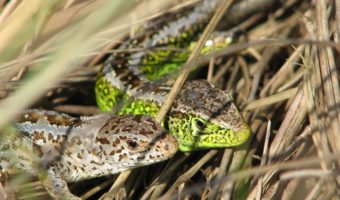 The sand lizard (Lacerta agilis) is a small, rare lizard that is found in Europe and Asia. The word “lacerta” derives from Latin meaning lizard, while “agilis” is also Latin, meaning mobile, swift or agile. Sand lizards are the only member of their family and are sometimes called the viviparous lizard.

While these lizards are fairly uncommon, there’s still lots to learn about them. Keep reading on to find out more.

There are at least three sub-species of sand lizard that live in different regions of England. They vary slightly and can usually be distinguished by the way they look. Sand lizards living in the Surrey area are different to those living in the Dorset area. The dorsal stripe on these lizards may be broken, thinner or missing, but can be difficult to identify or differentiate.

The third subspecies is easier to tell apart. They live in the coastal dunes of West Lancashire, Wales, and along the Kentish coast and are smaller and slimmer. The males are also a lighter green than those living in Surrey and Dorset, and may even stay green throughout the entire year. The dorsal stripes are also broader and more prominent in this subspecies. 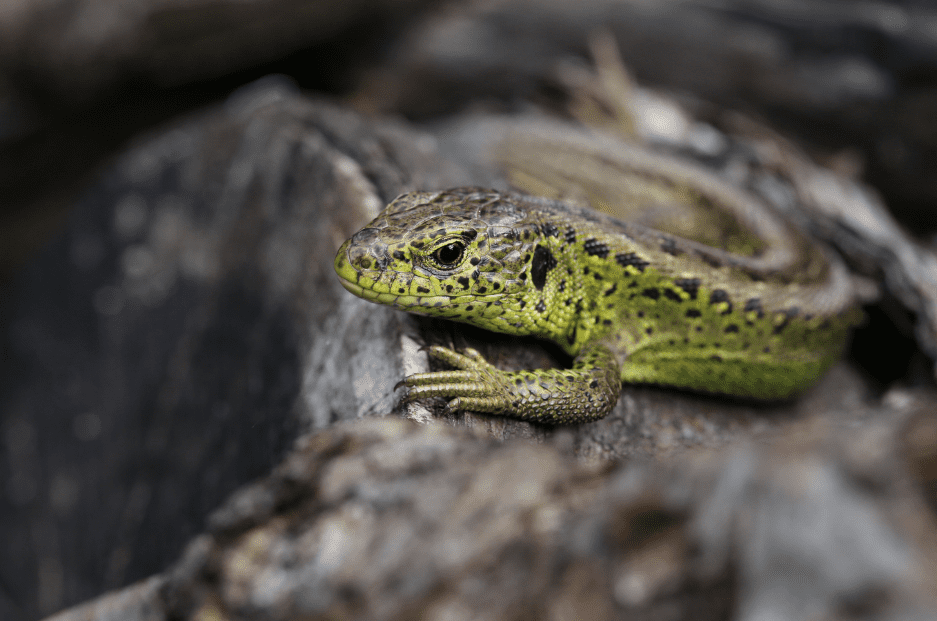 The sand lizard is generally sandy-brown in color, with dark splotches on their sides that are typically lighter in the middle and darker around the outsides. Males have green flanks that turn brighter green during mating season, which is thought to be so female sand lizards can see them more easily. The markings along the flanks are more closely crowded together on the male than on the female, too.

Sand lizards have stocky bodies, with males being stockier than females. The lizards also have long tails that are at least 1.5 times as long as their bodies. If they become trapped or are in danger, they can lose their tails. These lizards can reach up to 20cm in length and weigh about 15 grams.

Sand lizards can live up to around 20 years old, but on average they live between 5 and 8 years.

Because sand lizards are reptiles and cold-blooded, they do not need to eat that much. They are carnivores and their diet mainly consists of spiders and insects, such as grasshoppers.

However, they can survive for long periods if food is not available. If they get hungry enough, they will also eat some flowers and even their own young.

When hunting, a sand lizard will stop and listen for movement. Once they hear a sound, they will move their heads backward until they locate the source. They will then pounce on it with their mouths. However, if the prey gets more than 60 cm away, they will ignore it and continue foraging for food.

Sand lizards and generally solitary animals, but you may see them in pairs. A sand lizard moves about a lot during the day and can travel at speeds of up to 30 miles per hour. They must spend a good amount of time basking in the sun during the day, because they do not generate body heat and rely on the sun to keep warm.

They do not come out of their burrows in the morning until they sense that it is warming up outside, and then return before sunset. It is thought that they need sunlight to warm their bodies before they have the energy to hunt.

If the weather gets too warm and the ground is too hot, sand lizards will quickly lift each foot off the ground to keep their feet from burning. They may also lay on their bellies with all four feet in the air at the same time.

The biggest predator of sand lizards are birds of prey, especially kestrels. They are also hunted by the smooth snake, foxes, badgers, crows and weasels.

To escape predators, sand lizards will first of all lie very still. If this does not work, they will try to escape to their burrow. Failing this, they will release their tail which will wiggle on the ground for several minutes. This distracts the predator for enough time to allow the lizard to escape.

Lizards can bite humans if they feel threatened. However, their bite is not poisonous.

It is thought that female lizards choose their mates, and like to mate with those who are distantly related. The breeding season is during March and April, during which time the female will mate with several males, but she will only lay eggs once each year. She usually lays around 8 eggs.

The eggs are left buried in sand exposed to the sun which helps to keep them warm. They stay in the nest for three-to-four months before they hatch in August or September. After the mother has laid the eggs, she leaves the nest, which means baby sand lizards must fend for themselves when they are born. The hatchlings reach sexual maturity at around 2 years old.

During mating season, males can become very aggressive. They will even fight each other to death.

Sand lizards live in burrows and stay in their burrows during the winter months. Males can begin hibernation from late August-early September but females often start to hibernate about a month later, in September or early October. In the spring, around April and May, male sand lizards come out of hibernation first. 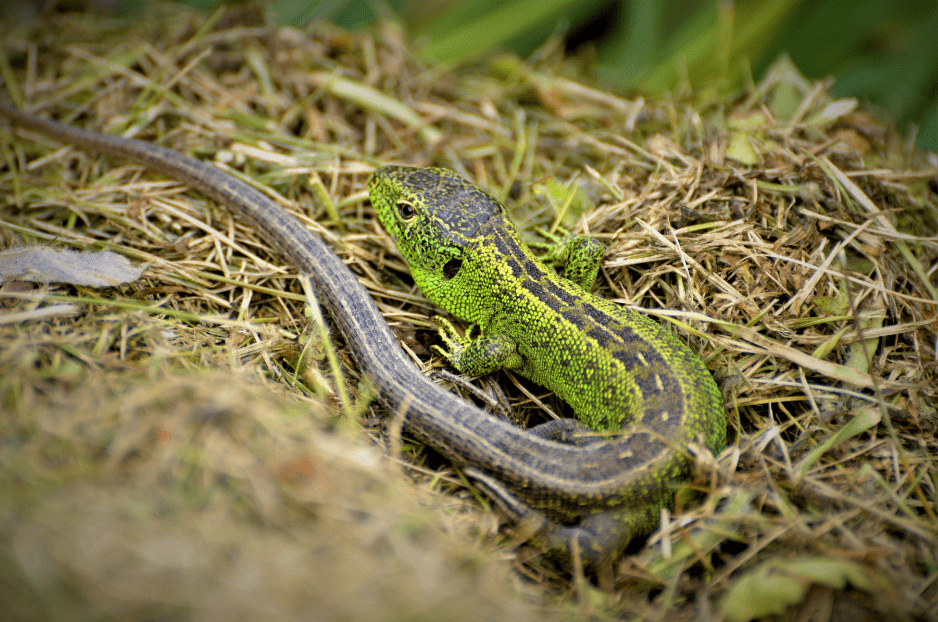 These lizards can be found across much of Europe, and are England’s rarest lizards. In the UK, they are are restricted to south and west England, and to a couple of sites in Wales. There are also a small amount of sand lizards in Scotland.

Sand lizards have limited distribution in Scandinavia, west and south-east France, Italy where it is present only in isolated colonies, European Turkey, most of Greece and the Iberian Peninsula, but can be found in western areas of Russia, Mongolia and China.

While sand lizards generally need a heathland habitat with varied vegetation for both basking and sheltering, they are very adaptive and often have to adapt to wherever they live. They need the area to be soft to create burrows and like mossy and sandy areas so that they can lay their eggs. They also generally preferred a sloped area. In the day, they hunt for food in grassy areas and then return to sand areas when the sun sets.

Despite being one of the rarest reptiles anyway, it is thought that the population of sand lizards is rapidly declining, and this is mainly down to humans. The main reason for the loss of sand lizards is urban development, which leads to habitat loss.

While the International Union for Conservation of Nature considers the species to be of least concern, the Wildlife and Countryside Act of 1981 and the United Kingdom Post-2010 Biodiversity Framework list it as a priority species. The sand lizard is strictly protected by British and European law which makes it an offence to kill, injure, capture or disturb them, damage or destroy their habitat, or to possess or trade in them.

The sand lizard population is being helped by captive breeding and reintroduction. It is much easier to breed these lizards in captivity and release them into the wild, because sand lizards cannot disperse far or colonize newly suitable areas. This means that, without help, they are very unlikely to breed in new areas and the population will continue to decline. 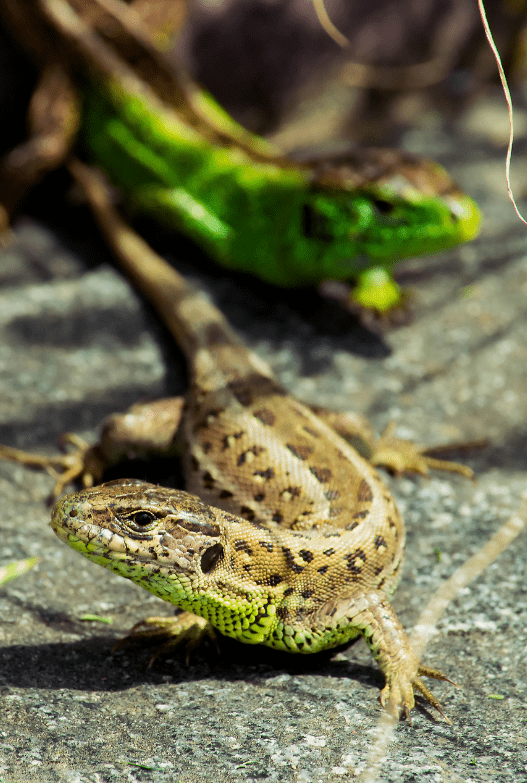