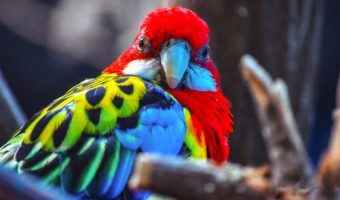 The Scarlet Macaw (Ara macao) is a large, very colorful parrot that lives in the tropical humid environments of the Amazon Rainforest.

The Scarlet Macaw is native to humid evergreen forests in the American tropics, from Central America and South America, including eastern Mexico, Guatemala, Belize, Colombia, Ecuador, Amazonian Peru and Brazil.

The Scarlet Macaw resides in lowlands up to 500 metres (formerly up to 1000 metres). The Scarlet Macaws usual habitats are the emergent layers and canopy layers of the rainforest.

The Scarlet Macaw is about 81 to 96 centimetres (32 to 36 inches) long, of which more than half is the pointed, graduated tail typical of macaws. Their average weight is about one kilogram (2 to 2.5 pounds). Their plumage is mostly scarlet, but the rump and tail-covert feathers are light blue. Their greater upper wing coverts are yellow, the upper sides of the flight feathers of the wings are dark blue as are the ends of the tail feathers and the undersides of the wing and tail flight feathers are dark red with metallic gold iridescence.

The Scarlet Macaws have bare white skin around the eye and from there to the bill. Their upper mandible is mostly pale in color and the lower is black. Both male and female Scarlet Macaws are alike. The only difference between ages is that young birds have dark eyes and adults have light yellow eyes.

Wild Scarlet Macaws mostly eat fruits and seeds, including large, hard seeds. Like other parrots, they are seed predators, they destroy the seeds that they eat and do not disperse them. Some macaws are sometimes seen eating clay from river banks.

A typical sighting is of a single Scarlet Macaw or a pair of Scarlet Macaws flying above the forest canopy, though in some areas flocks can be seen. These magnificent birds can fly at speeds up to 35 miles per hour (56 kilometres per hour) and have a life span of about 80 years.

Like most parrots, the female Scarlet Macaw lays 2 to 4 white eggs in a tree cavity. The young hatch after 24 to 25 days. They fledge about 105 days later and leave their parents a year later.

Scarlet Macaws are an endangered species due to their capture as pets and loss of habitat.

Before the Scarlet Macaws decline in population, its distribution included much of Costa Rica. However, by the 1960s Scarlet Macaws had been decreasing in numbers due to a combination of factors, particularly hunting, poaching and the destruction of habitat through deforestation. Further, the spraying of pesticides by companies cultivating and selling bananas for export played a significant role in decreasing Scarlet Macaw populations.

As pets, Scarlet Macaws are popular cage birds for those who can pay both the high price of the bird and the price of the big cage required. You should beable to tolerate their loud calls and can give them considerable time outside their cages. They are considered sociable and affectionate and some talk quite well.