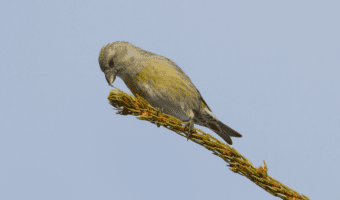 This race of crossbill is resident to Scotland and is not known to migrate. The race will form flocks outside the breeding season, often mixed with other crossbills. 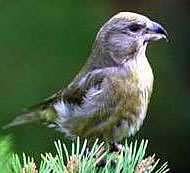 Adult male birds tend to be red or orange in color and females green or yellow, however. there is much variation. The Scottish crossbill is listed as the only bird species endemic to the British Isles, which provides a strong incentive to maintain its identity as a separate species. Its taxonomic status is however controversial, with it often being considered a race of either Parrot Crossbill or Common Crossbill, both of which breed within its range. The population is thought to be less than 2000 birds. Scottish Crossbill birds nest in pines or other conifers, laying 2 – 5 eggs during breeding time.

Scottish Crossbill calls can be distinguished by sonograms (A sonogram, also known as an ultrasound, is a computerized picture taken by bouncing sound waves off organs and other interior body parts). This provides the basis for a method to survey crossbills and, for the first time, gain a clear picture of their numbers and distribution in Scotland and help in any conservation programs for the race.

Scotlands conifer woods are home to three types of crossbill –

The Common Crossbill (Loxia curvirostra) – with a small bill best suited to extracting seeds from the cones of spruces.

The Parrot Crossbill (Loxia pytyopsittacus) – with a large bill suited to extracting seeds from pine cones.

All three are very similar in both size and plumage.

The current estimate is of less than 2000 birds for its global population and a detailed survey is important to learn what the right conservation and management measures are to protect and conserve the species. The first survey of Scottish Crossbills is due in 2008. In future years, these birds could suffer from the effects of global warming.

Check out more animals that begin with the letter S