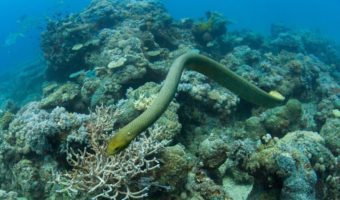 Sea snakes are closely related to Cobras. They are aquatic rather than land dwelling snakes. True sea snakes only live in water. Sea Snakes have adapted to a life in water and have small flattened heads that minimizes water resistance when they swim. The Sea Snakes body is compressed as an adaptation for swimming and the snakes are so thoroughly aquatic that they are either clumsy or slow when brought ashore. 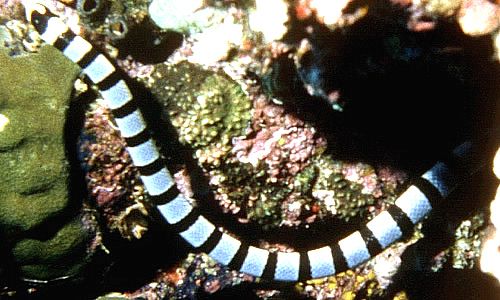 Sea Snakes are only moderately large, rarely exceeding 2 metres in length, often with peculiarly small heads for their body size.

Only genus ‘Laticauda’ (which includes the Black Banded Sea Krait) has the typical broad ventral scales of snakes and it is often considered the least advanced of the sea snakes. Nevertheless, similar to cetaceans, their lungs still require them to surface occasionally to breathe. Oxygen intake through the skin has been demonstrated in sea snakes. Sea snakes like warm, tropical waters, however, when the water gets too warm, they swim down to cooler temperatures.

Transmitters attached to yellow-bellied sea snakes show they can dive to about 150 feet and can stay underwater for more than three hours. Like seabirds and sea turtles, sea snakes have special glands that collect extra salt from the blood. The snakess salt glands lie beneath their tongues. Each time a sea snake flicks its tongue, it is ejecting salt back into the ocean.

Sea snakes have specialized flattened tails for swimming and have valves over their nostrils which are closed underwater. Unlike eels, sea snakes lack gills or fins, instead having scales and spending much of their time underwater, they must surface regularly to breathe.

Sea snakes are confined to the tropical oceans, chiefly the Indian Ocean and the western Pacific Ocean. The yellow-bellied sea snake, (Pelamis platurus), extends to the eastern Pacific. The olive sea snake, (Aipysurus laevis), tends to live in reefs.

The yellow-bellied sea snake (Pelamis platurus) is pelagic (living in open oceans or seas rather than waters adjacent to land or inland waters) and is seen on occasions floating in massive groups. Fish that come up to shelter under slicks provide food for the snakes. Occasionally these yellow-bellied sea snakes get washed up on beaches after storms and pose a hazard to children.

Sea snakes are aggressive only during the mating season in the winter, the sea snake is very curious and they become fascinated by elongated objects such as high pressure hoses.

Except for a single genus, all sea snakes are ovoviviparous (development of eggs that remain within the mothers body up until they hatch or are about to hatch.). The young are born alive in the water where they live out their entire life cycle. In some species, the young are quite large, sometimes up to half as long as their mother. The one exception is the genus ‘Laticauda’, which are oviparous (animals that lay eggs with little or no other embryonic development within the mother). Its five species all lay their eggs on land.

Sea snakes may not be the most venomous in the world, however, their venom is more toxic than that of Mojave rattlesnakes and king cobras. Sea snakes venom contains some of the same chemicals found in cobra venom, only more concentrated in form.