You are here: Home / Animals / Seahorse 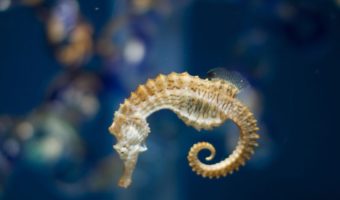 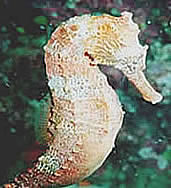 The Seahorse belongs to the same family as pipe fishes and sea dragons. There are 35 different species of seahorse which can be found in warm shallow waters all over the world. The head of the seahorse resembles a horses head and its body has an elongated tail covered by about 50 rectangular bony plates. ‘Hippocampus’ is the scientific name for the seahorse and it means ‘bent horse’ in Greek.

Seahorses range in size from 16 millimetres (the recently discovered Hippocampus denise) to 35 centimetres. Seahorses are notable for being the only species where the male seahorses become pregnant.

The seahorse is a true fish, with a dorsal fin located on the lower body and pectoral fins located on the head near their gills. Some species of seahorse are partly transparent, and are often not spotted in aquariums despite being there and are also not often seen in pictures.

The seahorses long tube-like snout acts like a vacuum cleaner for food, sucking up tiny shrimp and crustaceans. It is able to hang on to sea grass by wrapping its tail around the stems. This helps it to avoid being swept away by strong currents.

Like chameleons, seahorses can change color so they match their surroundings in the sea grass. This camouflage protects them from predators such as crabs although, with their bony armour, there are very few animals that can eat them anyway.

The seahorse is one of the most amazing and unique creatures of marine fauna. Unfortunately, most seahorses are listed as ‘Vulnerable’ due to a population decline of at least 20% in 10 years or 3 generations projected or suspected in the future based on a decline in area of occupancy, extent of occurrence and/or quality of habitat and actual or potential levels of exploitation declines and habitat destruction.

Hippocampus capensis (Knysna seahorse) is the only seahorse listed as Endangered, due to its small area of occurrence (found in only five estuaries in South Africa) and extensive damage to its habitat.