You are here: Home / Animals / Serval 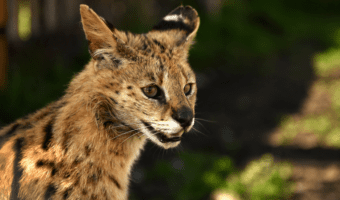 Rainforest Serval The Serval (Leptailurus serval) is a medium-sized African wild cat. It is closely related to the African Golden Cat and the Caracal. The Serval is generally found in most parts of Africa excluding the arid desert regions to the north around the Sahara, parts of the western tip of Southern Africa and certain areas of the tropical rainforests of Central Africa.

A northern sub-species is rarely sighted and is listed as endangered. 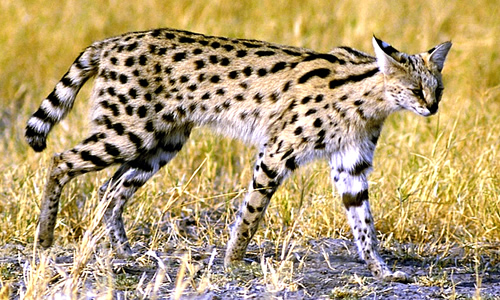 Their longish oval ears are set close together. The pattern of their fur is variable. Melanism (an increased amount of black or nearly black pigmentation) is known to exist in this species, giving a similar appearance to the black panther. White servals are white with silvery grey spots and have only occur in captivity.

Servals have relatively the largest ears and the longest legs in the cat family. Their feet are actually elongated rather than their legs. They have long necks and their heads are small and slim. Their coat is tawny-gold in color and marked with round black spots.

Generally the spots are large and they tend to merge into longitudinal stripes on the neck and back. Sometimes there are numerous small spots, giving a speckled appearance.

The tail of the serval is short, down to the hocks. It is tipped with black and is spotted and ringed. A servals ears are black with central white bars. Their skulls are distinctly elongated and the upper anterior premolars are present.

Although the Serval is highly specialised for catching rodents, it is an opportunistic predator whose diet also includes hares, hyraxes, birds (quails, flamingoes, quelea and teal), reptiles, insects, fish and frogs.

The Serval has been observed taking larger animals, such as small antelopes, however, over 90% of the Servals prey weighs less than 200 grams (7 ounces). The Serval eats very quickly and if its food is big enough, it sometimes eats too quickly, causing it to regurgitate the food because of clogging in the throat.

Serval cats range from dry open grasslands to woodland savanna and even to the moister areas around the equatorial rainforests.

The Servals main habitat is the savanna, although melanistic individuals are more usually found in mountainous areas. The Serval needs water courses within its territory, so it does not live in semi-deserts. It is able to climb and swim, but seldom does so.

The Serval has now reduced in numbers due to human population taking over its habitat and also hunting for its pelt. It is not necessarily now threatened with extinction, however, it may come to that unless trade is closely controlled.

Servals are found in well-watered savannah long-grass environments and are associated with reed beds. They occupy a variety of habitats all associated with water sources, they range up into alpine grasslands and can penetrate deep dense forests along waterways and through grassy patches. They will make use of arid areas in extreme instances and have occasionally done so in parts of south-western Africa. 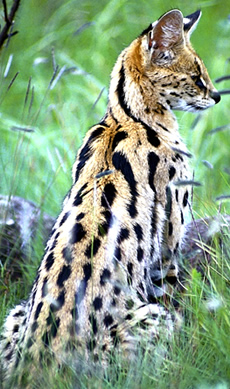 As part of its adaptations for hunting in the savannas, the Serval boasts long legs (the longest of all cats, relative to body size) and large ears. The long legs and neck allow the Serval to see over tall grasses, while its ears are used to detect rodents, even those burrowing underground.

While hunting, the Serval will pause for up to 15 minutes at a time to listen with eyes closed. The Servals pounce is a distinctive vertical ‘hop’, which may be an adaptation for catching flushed birds.

The Serval is a highly efficient hunter, catching prey on as many as 50% of attempts, compared to around one of ten for most species of cat. The Serval may also dig into burrows and fish the unlucky inhabitants out.

Servals walk slowly through tall grass and listen for movement, if it is windy they wait. They leap high with all four feet off the ground. Their prey is stunned or killed as the cat hits them with its forefeet.

If the serval misses it makes a series of swift, successive stiff-legged jumps in attempt to remedy the situation. Servals also use a high bouncing pounce to flush animals from cover, galloping zig-zag fashion through the grass with high leaps.

Female servals hold exclusive territories from about two to nine kilometres squared. Male ranges are usually twice the size and will overlap two or more female territories. Boundaries are marked with frequent scent and scrape marks.

Male servals have been observed to display very ritualistic aggressive behaviour. They sit and face one another as one individual puts his front paw on the others chest. The second animal bobs his head and may bite the upraised paw. This exchange can escalate into a full fight, however, more often remains as a protracted stare-off.

Adult male servals have been observed to display some social behaviour, by resting together during the day.

Servals in the Ngorongoro are mainly nocturnal, this reflects the activity peaks of their main prey species. In the Serengeti they tend to be more diurnal as the basic prey are Nile rats, which are active in the day.

The gestation period for a female Serval is 66 – 77 days, almost 3 months. The litter consists of 2 or 3 young (called kittens), sometimes as few as one or as many as 5. The kittens Weigh around 260 grams at birth, their eyes are fully open by nine days.

They are raised in sheltered locations like abandoned aardvark burrows. If such an ideal location is not available, a place behind a shrub may be sufficient. By four weeks the kittens have their first solids and are weaned in 4 to 7 months. When the young servals are one year old they will leave their natal range.

In recent years, servals have become popular as pets in North America and Europe. While these beautiful cats can make great companions, there are also some important things to consider before bringing one into your home.

There are a few things you should consider before getting a serval cat. First, be sure you have enough space to provide for the cat’s needs. Servals need plenty of room to roam and explore, and small home or apartment will not be suitable.

Second, servals are not domesticated animals. This means they have not been bred over generations to live peacefully with humans.

Servals are wild animals, and their instinct is to hunt and kill.

This can pose a danger to small children and other pets in your home. Even if a serval has been raised in captivity, it is still a wild animal and may become aggressive if it feels threatened.

Servals can’t be litter box trained, so you’ll need to provide a large, outdoor enclosure for your cat. This type of setup is not suitable for everyone, and it can be expensive to maintain.

Servals can jump very high and dig very deep, so the enclosure will need to be escape-proof.

If a Serval were to escape its enclosure it would pose a serious threat to wild and domestic animals such as pets or farm animals. This would mean that farmers or animal control would use lethal force on a roaming Serval.

The Serval is sometimes preyed upon by the Leopard and other large cats. More dangerous for this cat are humans. The Serval was extensively hunted for its fur. It is still common in West and East Africa, however, it is extinct in the South African Cape Province and very rare north of the Sahara.

The serval is reasonably widespread and relatively common throughout Africa. It also breeds well in captivity.

The IUCN Red List has the North African serval as Endangered but all other servals as Least Concern.

Servals are reputed to be easy to hunt and will run up a tree if chased by dogs. Then they can be easily shot. The principle threats they face in the rest of their ranges are habitat loss and persecution (Serval Research in South Africa.

Servals are believed to be responsible for sheep and poultry losses. Blackbacked jackal and caracal are more likely to be the culprits. Servals also get trapped easily. It is unfortunate for the serval that it has such beautiful fur. People still demand the skins of spotted cats.