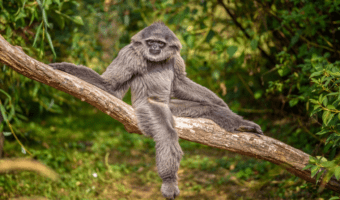 The Silvery Gibbon (Hylobates moloch), is a primate in the family ‘Hylobatidae’ or gibbon family. The Silvery Gibbon is only found on the island of Java in Indonesia. Because of their isolated location, it is estimated that there are less than 2000 of these animals currently living in the wild. It is both diurnal and arboreal.

These Gibbons are known as ‘Lesser Apes’. Lesser apes differ from great apes (chimpanzees, gorillas, orangutans and humans) in being smaller and pair-bonded, in not making nests, and in certain anatomical details in which they superficially more closely resemble monkeys than great apes do.

There are two subspecies of the Silvery Gibbon: 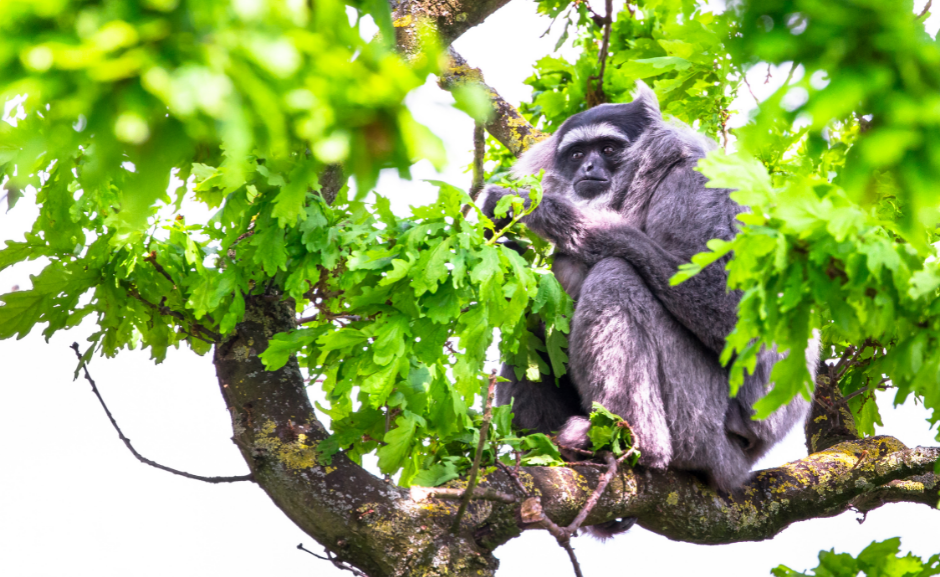 Silvery Gibbons are fluffy with greyish-white fur with a dark grey or black cap on their heads. They have a white or light grey fringe that surrounds their rather dark face. Their fur is very long and dark grey on the top of their round heads. Like all gibbons, they have no tail and their arms are long compared to their body which span at least twice their height.

These Gibbons have lean bodies which are specially adapted to swing below the branches suspended by their arms. They hook their fingers over a branch, not actually grabbing it, and sometimes make long swings and let go of the branches entirely. The average weight for an adult is approximately 13 pounds (6 kilograms) and the males and females are very similar in appearance and size.

The Silvery Gibbons primarily diet is fruit. Since fruit-bearing trees are usually scattered in the rainforests, they must travel extensively to find food and each gibbon family usually has a territory that they travel through that averages about 42 acres. Sometimes these territories will overlap, allowing several families to share the same fruit trees. They have also been known to eat flowers and leaves.

Hylobates, their scientific name, means ‘dweller in the trees’. Silvery gibbons spend most of their lives in the tree tops. They prefer the dense and close canopy of undisturbed primary forest. They inhabit deeply hidden portions of the rainforests, climbing trees skillfully and swinging through the forests. Silvery Gibbons travel in small family groups that consist of a mated pair and their offspring in various stages of development.

Silvery gibbons are not found in mangrove rainforest, or above 4,800 feet (1600 metres) above sea level. 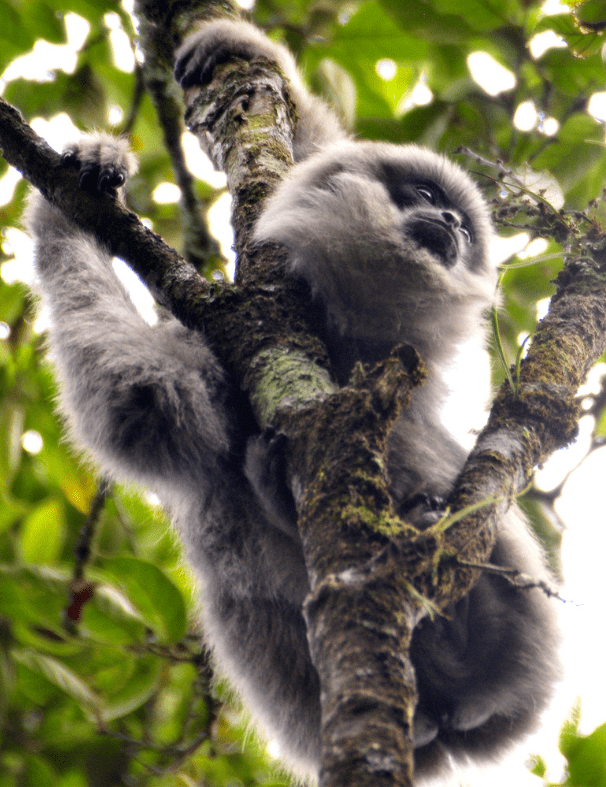 Silvery Gibbons travel by swinging from branch to branch, using their long fingers to hook the branches as they swing forward for the next branch. At times, their swings are so powerful that it allows them to be completely airborne and reach greater distances in one swing.

They are able to walk on the ground if they need to and they can walk on two legs, holding their arms up above their heads to help balance. In each familys territory, there are trees that are used for specific purposes, like sleeping and calling. They repeatedly use the same trees for these activities.

Every morning, the female Silvery Gibbon will arise and announce her presence to the forest by shrieking and calling. These calls can be heard for at least one kilometre in all directions.

Silvery gibbons, like most gibbon species, are monogamous and mate for life. There is no breeding season and a female will come into oestrus at any time of the year. The female will produce offspring about every 2 to 3 years. Gestation usually lasts 7 to 8 months and only one baby gibbon is born at a time. The infant is hairless with only some fluff on its head.

It is kept close to its mother for warmth and nursed for about a year. The infant lives with the family group until it is fully mature at about 8 years and until they are ready to go off on their own and find a mate. Gibbon families are usually very closely linked and they stay close together when traveling. If threatened in their territories, the gibbon female will sing and scream while the male chases off the intruder, usually with a lot of noise and crashing through branches.

The Silvery Gibbon (Hylobates moloch) is currently listed as Critically Endangered on the 2007 IUCN Red List of Threatened Species. Habitat destruction on densely populated Java continues to reduce the natural range of the species. Many gibbons are also lost to the illegal pet trade, when adult gibbons are slaughtered so that their babies can be sold in the markets as pets.

It is estimated that only 4% of their original native habitat is still available to the species. They are, of course, in danger from poachers who sell their meat, pelts and take the babies for pets. Several zoos operate Silvery Gibbon breeding programs. Despite these efforts, the future survival of this species is in question.