You are here: Home / Animals / Skylark 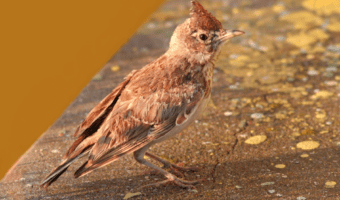 The Skylark bird (Alauda arvensis) is a small passerine bird species. The Skylark breeds across most of Europe and Asia and in the mountains of north Africa. It is mainly resident in the west of its range, however, eastern populations are more migratory, moving further south in winter. Even in the milder west of its range, many birds move to lowlands and the coast in winter.

The Skylark is 16 to 18 centimetres long. It is a dull-looking species on the ground, being mainly brown above and paler below. The Skylark has a short blunt crest on the head, which can be raised and lowered. 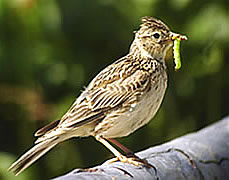 In flight, the Skylark bird shows a short tail and short broad wings. The tail and the rear edge of the wings are edged with white, which are visible when the bird is flying away, however, not if it is heading towards the observer. The Skylark has sturdy legs and spends a much time on the ground foraging for seeds, supplemented with insects in the breeding season.

The Skylark is a bird of open farmland and heath, known throughout its range for the song of the male, which is delivered in hovering flight from heights of 50 to 100 metres. The song generally lasts 2 to 3 minutes, however, it tends to last longer later in the season. The male Skylark has broader wings than the female. This adaptation for more efficient hovering flight may have evolved owing to the females preference for males that hover and sing for longer periods.

The Skylark makes a grass nest on the ground, hidden amongst vegetation. Generally the nests are very difficult to find. Around 3 to 6 eggs are laid in June. A second or third brood may be started later in the year. The eggs are yellow/white with brownish/purple spots mainly at the large end. 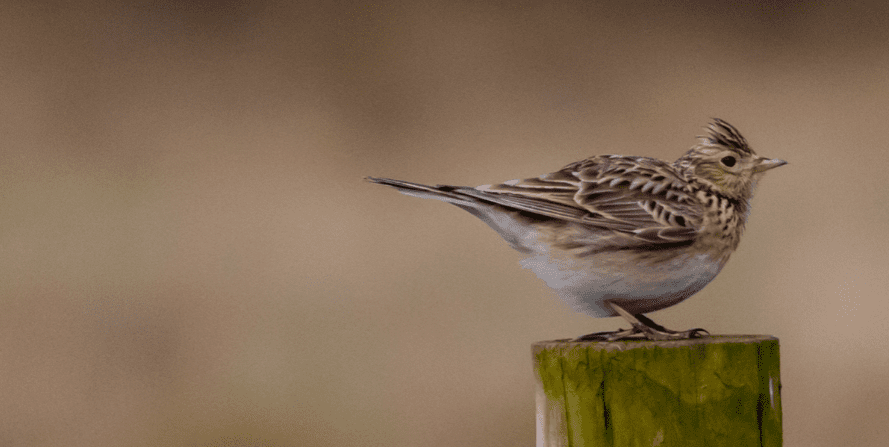 Skylark bird numbers have declined over the last 30 years, as determined by the Common Bird Census started in the early 1960’s by The British Trust for Ornithology. There are now only 10% of the numbers that were present 30 years ago. The RSPB (Royal Society for the Protection of Birds) have shown that this massive decline is mainly due to changes in farming practices and only partly due to pesticides.

Farmers are now encouraged and paid to maintain biodiversity and they can get a few points toward DEFRA’s (Department for Environment, Food and Rural Affairs) Entry Level Stewardship financial rewards for improving the habitat for Skylarks.

Check out more animals that start with S