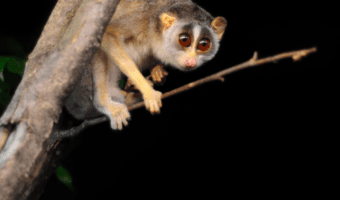 Slender lorises are small, nocturnal prosimians native to the rainforests of Sri Lanka and Southern India. There are actually two species, the Red Slender Loris (loris tardigradus) and the gray slender loris (loris lydekkerianus), and they are the only members of the genus Loris.

There are two subspecies of red slender loris, L. t. tardigradus and L. t. nycticeboides. They are all part of the family Lorisidae. Slender lorises were originally named Lemur tardigradus in 1758.

There are differences between the two species of slender loris, but there are many similarities, too. Let’s take a look at these unique animals in further detail below.

They have two large, closely set, saucer-like brown eyes that are used for precise depth perception and they are surrounded by dark-brown to black circles of fur. They have large prominent ears, which are thin, rounded and hairless at the edges. A major difference between the gray and red slender loris lies in their ear shape.

They have strong fingers and toes which are capable of maintaining a powerful grip for astonishingly long periods of time. The second digit on the hand and foot are very short, which allows for gripping on branches and food. They also have small finger nails.

The color varies between the two species, but it is light red-brown or gray-brown on its back and dirty white on its chest and belly. Their face is dark in color with a central pale stripe It has short fur on its forearms, hands and feet. 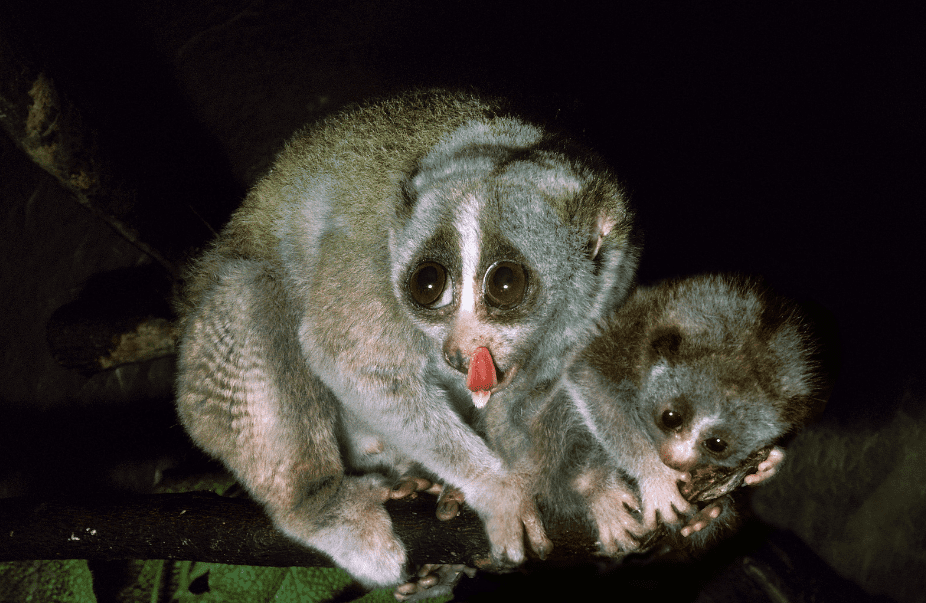 Slender lorises have lifespans of approximately 15 years, but can live longer in captivity.

The slender loris is mostly insectivorous, meaning they eat mostly insects, but they will also eat slugs, young leaves, flowers, shoots, and occasionally eggs and nestlings. They eat a lot of noxious insects, such as toxic beetles and roaches, and will then engage in urine washing, rubbing urine over their hands, feet and face, which is thought to soothe or defend against the sting of these toxic insects.

These animals mainly feed alone, but sometimes males and females forage in pairs, too. They have a highly developed sense of smell, which they use to locate insect prey in the dark. They catch their prey using a ‘sneak, spring, and grab’ method: they stalk along a branch, slowly approaching an insect and when they get close, they crouch and leap suddenly, grabbing the animal or insect.

To maximize protein and nutrient intake, slender lorises consume every part of their prey, including the scales and bones.

The slender loris is a nocturnal animal and spends most of it’s day curled up in a ball sleeping, in the crook of a branch or in a hollow tree. While they usually forage alone and are quite solitary animals, they sleep in groups of  2–4, usually with a mate or an infant. They are most active at dusk and dawn, playing, wrestling and grooming each other. The red slender loris is one of the most social of the nocturnal primates.

While these animals will occasionally forage together in social groups, males will not tolerate the presence of other males in their territory. Individuals communicate using urine scent marks, claiming territory or advertising their reproductive status to others.

These animals move slowly with deliberate hand-over-hand movements. They like to travel along the top of branches. They are capable of moving quickly if alarmed, but they do not jump or leap. If threatened, they will usually freeze and remain motionless until the danger has passed. If this fails, they will stare at their attacker and growl while emitting an unpleasant odor from scent glands under their arms.

Mating occurs twice a year for slender lorises, once in April-May and once in October-November. During mating season, the female is in estrus for a period of 29-40 days. During mating, the female hangs from a branch by all four limbs and will completely support the male’s weight, in addition to her own.

The gestation period is between 166-169 days long and normally one infant is born, although sometimes two. Gray slender lorises will often bear twins but the survival rate is low.

Newborn infants are born pink and almost entirely furless. They cling to the mother’s front for a few weeks, using its front and hind legs to grab around her waist. After that, it will be “parked” in a tree while the mother goes off to feed. They will feed from her for about 6 to 7 months. Females reach sexual maturity at 10 months, but it can be up to 18 months for males.

It has been observed that the maternal instinct in slender lorises is strong, with captive females being observed caring for the infants of other females. In captivity, the slender loris breeds year round. However, individuals in captivity will not breed if no suitable branch is available.

The two subspecies of red slender loris differ in their habitat preference. One, the lowland loris, favors wet lowland forests (up to 470 m above sea level) south west of Sri Lanka, while the second, the mountain loris, prefers highland evergreen forests at elevations of 1800–2300 m.

The gray slender loris can be found in tropical rainforests, coastal acacia scrub forests, semi-evergreen forests, swamps, and bamboo groves up to 2000 m above sea level.

They generally prefer thick, thorny vegetation there they can easily escape predators and find the large assortment of insects that is the mainstay of their diet.

It is not clear how many slender lorises survive in the wild or the loris population. Because of their small size and nocturnal habits, it has been difficult to do an accurate count. However, they are considered to be vulnerable by the 2000 IUCN Red List (International Union for Conservation of Nature Red List) and are certainly a threatened species. The red slender loris is an endangered species.

In North America, there are only about 10 slender lorises remaining in captivity, and the animals are quite aged. Unfortunately, it is unlikely that a sustainable captive population can be maintained in North America.

Slender lorises are illegally smuggled to supply a growing exotic pet trade, too. Other threats include habitat loss, electrocution on live wires, and road accidents. 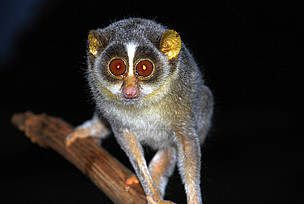