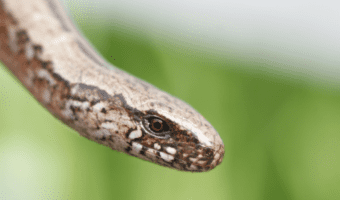 The slow worm (Anguis fragilis), also known as a deaf adder, a slowworm, a blindworm, or regionally, a long-cripple, is a reptile native to western Eurasia. Its genus is Anguis. Despite its name and appearance, it is not actually a worm or a snake, but a lizard, belonging to the family Anguidae and the order Squamata. They have been shown to be a species complex, consisting of 5 distinct but similar species.

The slow worm is a semifossorial (burrowing), legless lizard, which spends much of its time hiding underneath objects. Like many other lizards, they autotomize, meaning that they have the ability to shed their tails to escape predators, the most common of which is the domestic cat. The ability to shed their tail is also where they get their scientific name ‘fragilis’ (fragile).

They can be found in heathland, tussocky grassland, woodland edges and rides where they can find invertebrates to eat and a sunny patch in which to sunbathe.

There is concern that slow worm numbers may be in decline, due to the destruction of their habitat. However, they are currently listed as Least Concern on the IUCN Red List. 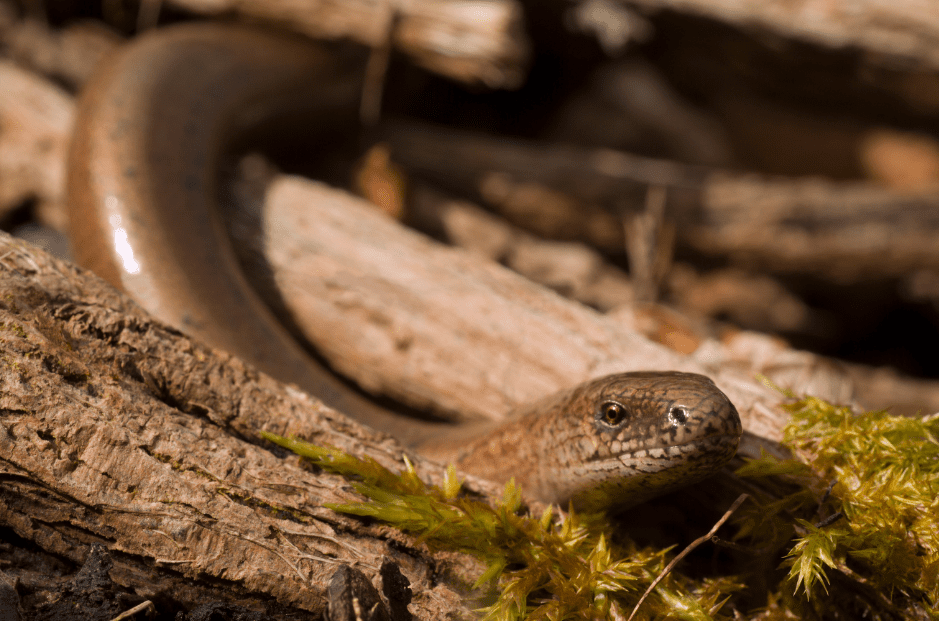 The slow worm is much smaller than a snake, and reaches a length of about 45cm (18 inches) from nose to tail, with up to 22 cm on the head and trunk section and the rest on the tail.

They have a slim build and a very smooth, glass-like coat, which usually has a glossy, metallic finish. The skin consists of smooth, round to hexagonal scales that overlap like roof tiles and are roughly the same shape on the dorsal and ventral surfaces of the body. The trunk has 125 to 150 transverse scale rows and the tail has another 130 to 160 rows. Under the scales there are bony plates, which means that slow worms crawl much more stiffly and clumsily than snakes.

Their skin is normally golden-grey in color, but males are paler in color and sometimes sport blue spots. This blue coloration is more common in coastal or island populations, and may vary over the year. It does not usually occur until an animal is at least three years old. Females have dark sides and a dark stripe down the back. Black and albino slow worms also occur, but they are very rare.

There is sexual dimorphism in this species. Aside from the color differences between the two sexes, females are generally larger. Males have broader and longer heads. Both species often have scars, however the male’s are from fights, and the females are from mating. Scars on females are usually to the head, neck and upper body.

The slow worm is able to shed its skin, known as caudal autotomy. When the lizard does this the sloughs fall away from the body in sections, as with other lizards, rather than shedding one complete slough, as is usual for snakes.

When threatened, they can detach the tail, too. Their tail will grow back, but not to the length it was originally. It will remain as a short stub.

Slow worms grow to be about 50 cm (20″) long and may be the longest-living lizard. They have been recorded to live for up to 30 years in wild, and the record age for a slow worm in captivity is 54 years! 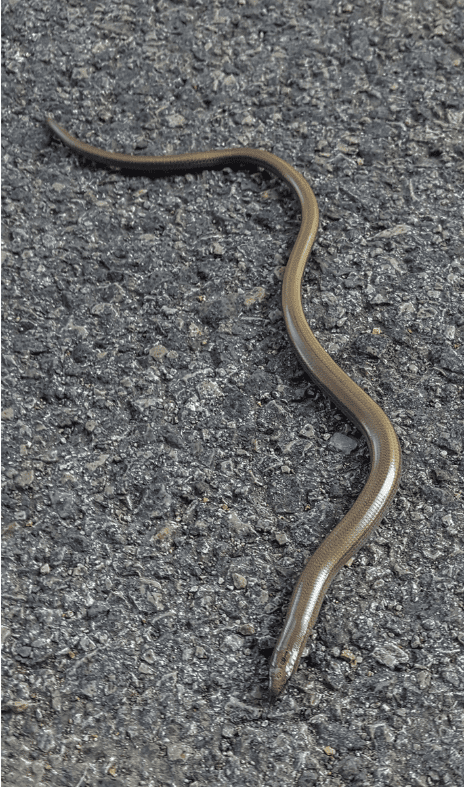 Slow worms are carnivorous and feed mainly on invertebrates, including slugs, snails, mealworms and crickets. They prey is small and although they have a similar build to the snake, they cannot expand their body to make room for larger prey.

They hunt mostly in long grass and other damp environments to find their prey. They are often referred to as “the gardener’s friend”, as they prey upon many pest species that attack flowers and vegetables.

The slow worm is a diurnal reptile, which means that they are usually active during the day and rest during the night. They mostly hide beneath rocks and logs, which makes them difficult to observe. They need warmth of the sun to gain the energy it needs to hunt, but on warm nights it can gain some energy through conduction from the warm ground.

Male slow worms can be seen basking in the spring, but this is usually obscured by vegetation. Females are rarely observed in the open.

This species hibernates spend the colder months from October to March underground, only emerging in April to breed. They may disappear underground again during the hottest part of the summer. They are not normally territorial, but fights between males can occur during the breeding season.

The slow worm is not usually a fats moving animal, but will move quickly if under threat.

Slow worms have a varied breeding season, depending on the range. In the UK, the breeding season occurs around April or May, and the young are born in August or September. In the Iberian Peninsula, where the climate is warmer, mating may begin as early as March.

Males compete with each other to breed with females, often fighting aggressively with each other. Courtship may last for as long as 10 hours before copulation occurs. When mating, the female is bitten in the head or neck region.

The slow worm is an ovoviviparous species. Eggs develop and incubate inside the female, and the young are born live. After hatching, the young stay in the mother’s womb for a while. While the babies of slow worms are inside the body of the mother, they live off the yolk of the eggs that hatch inside the bodies of the female slow worms. The gestation period can be between 3 and 5 months long, and the number of offspring can range from 3 to 20! Female slow worms generally reproduce every other year and reach sexual maturity at around 3 to 4 years old.

Juveniles are usually very thin and are just about 4 cm long. Both sexes are usually gold in color with dark brown bellies and sides with a dark stripe along the spine when they are young.

Slow worms has a broad distribution in continental Europe, where it is found from Scandinavia south to northern Spain and Portugal, and eastwards to southwest Asia and western Siberia. The slow worm is very widespread throughout the UK, but is naturally absent from Ireland.

The slow worm can be found in most habitats where there is vegetation, and most commonly resides in grasslands, allotments, gardens, heathlands, and grassy meadows. They prefer locations that are more damp, because this will contain more soft-bodied invertebrates which make up their major food source.

The slow worm is very rarely seen out in the open and prefers to be underground or under cover.

For hibernation, they need dry, frost free hibernation sites that are safe from predators. This is commonly at the base of a compost heap, or under rubble in urban areas. In wild areas, ant nests are sometimes used, along with grass tussocks, root systems and other deep vegetation structures.

The slow worm has declined in numbers in recent years, although the species is currently listed as Least Concern on the IUCN Red List. In the UK, the slow worm has been granted protected status, alongside all other native British reptile species. Under the Wildlife and Countryside Act 1981, to intentionally kill, injure, sell, or advertise to sell them is illegal.

Habitat loss is the greatest threat to the slow worm, particularly due to development on land that would naturally be a great source of food and shelter for the slow worm.

They are also often killed by humans as they are mistaken for snakes. They can be killed by slug pellets in gardens, too.

Slow worms are small reptiles, which makes them easy prey for many animals. They are most commonly preyed on by birds, snakes and mammals, such as pheasants, badgers, adders and hedgehogs. One of their main predators is the domestic cat.

When threatened, they will shed their tail to help them escape from predators. They are also known to defecate which produces a foul smell and wards off the predators, keeping them safe.

Slow worms do not post any risk to humans, and should be left alone if found in gardens. In fact, they have a positive impact as they feed on garden pests, particularly slugs.

How do I recognize a slow worm?

Slow worms can be difficult to recognize because they look like snakes, but they are actually much smaller than snakes. They measure about about 45cm long and has a cylindrical body which does not taper in at the neck. Color-wise, they vary from grey to bronze with a pale underside. They may also have blue spots, which may indicate a male slow worm.

Where does a slow worm live?

Slow worms live in many places, including gardens! They live in areas with a lot of vegetation, and prefer to stay covered rather than being out in the open. Their habitats are also often damp, because this where they’ll find food.

What does a slow worm eat?

Slow worms eat small invertebrates such as slugs, snails, mealworms and crickets. They are excellent at getting rid of pests in our gardens, which is why we should encourage them to live there.