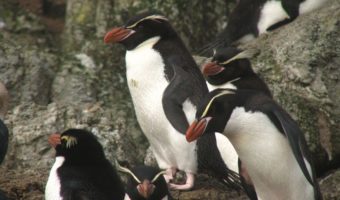 The Snares Penguin, also known as the Snares Crested Penguin and the Snares Islands Penguin, is a penguin from New Zealand. It breeds on The Snares, a group of islands off the southern coast of the South Island in New Zealand. Snares Island is a marine sanctuary which permits no humans. Currently there are about 30,000 breeding pairs of Snares penguins on the islands.

This habitat offers a moderate climate with enough vegetation for nest building and roosting. Snares penguins are closely related to the Fiordland penguins.

Snares Penguins are a medium-sized, yellow-crested penguin that grow to approximately 60 centimetres in height. Snares Penguins have dark blue-black upper parts and white under parts.

Snares Penguins have a bright yellow eyebrow-stripe which extends over the eye to form a drooping, bushy crest. They have bare pink skin at the base of its large red-brown beak.

Snares Penguins eat a variety fish, squid and krill which populate the warm waters of Southern New Zealand. As most penguin species do, they feed by shallow pursuit diving, using their webbed feet and strong flippers to propel them through the water at speeds up to 15 miles per hour. 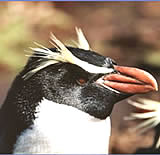 Breeding season for the Snares penguin begins in early summer and there is often much fighting and jockeying for territory and resources within the colonies.

Preferring forest or shaded vegetation, mated pairs scrape out shallow holes in the ground which they line with grasses, leaves, twigs and branches.

Two eggs are laid but only one chick survives. The egg is kept warm by both parents for 31 to 73 days. Once the eggs hatch the male broods and cares for the chick for 3 weeks. When the chicks are 3 to 4 weeks old they form a crèche with other chicks. Both parents feed the chick daily until it molts at about 75 days. At this time it will go to sea to provide for itself.

While they have no natural land predators, Snares penguins do have to contend with the usual sea-going mammals like Hooker’s sea lions.

Snares Penguins are currently rated as ‘vulnerable’ by the IUCN as their breeding range is restricted to one small island group. The current population is estimated at around 30,000 breeding pairs.